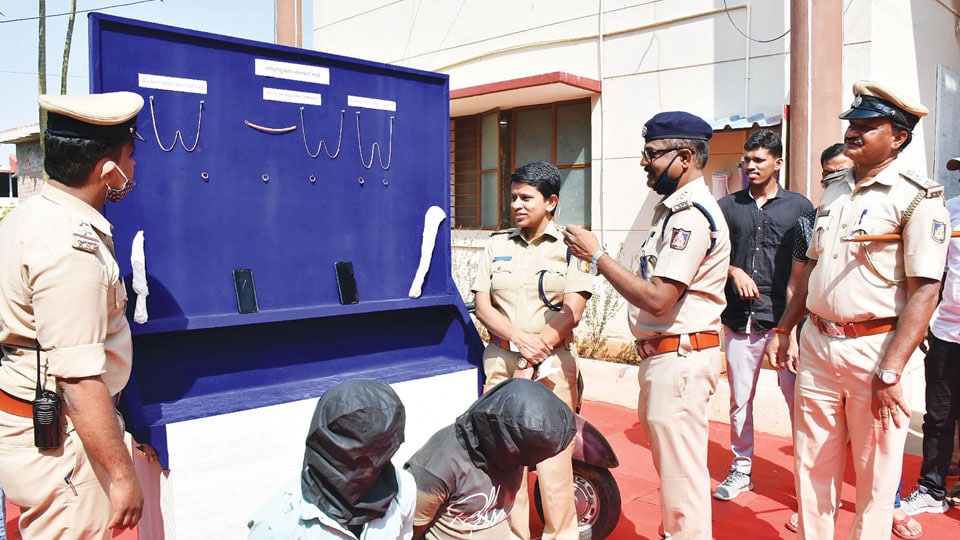 Mysore/Mysuru: The Vidyaranyapuram Police have arrested two members of a notorious dacoit gang that had spread terror among morning walkers. While the kingpin is already in jail, three more gang members are absconding.

They were giving the slip to Police since the last five months and were moving from one place to another and they did this by constantly changing their SIM cards. It is reported that they had about 25 to 30 different SIM cards. Also they did not stay at one place and slept near roadside buildings in Bengaluru, Mandya and Mysuru outskirts.

Two members were finally arrested in Chamundipuram yesterday when they were scouting for buyers of stolen gold. Their modus operandi was to target early morning walkers and at deserted streets they used to flash daggers and bill hooks to rob both men and women.

The arrested have been identified as 30-year-old Shiva alias ‘Tagaru Shiva’ of K. Salundi in Mysuru Taluk and 33-year-old Harish alias ‘Haavali’ of Sharadadevinagar. The gang kingpin Sharath is already in jail and he was arrested in Saraswathipuram two months back when he was found moving suspiciously in an Omni around midnight.

According to the Police, Shiva and Harish were moving suspiciously at Chamundipuram yesterday in an Activa scooter (KA-55-U-8244). They were looking for buyers of gold ornaments and were found making discreet enquiries. Alert cops cornered the duo and opened the scooter boot space to find a couple of daggers and bill hooks. They were later taken to Vidyaranyapuram Police Station where they confessed to the crime.

Police said, on 27.8.2020, they targeted Ananthaprabha of Visvesvarayanagar and pulled her into a conversation. She was standing in front of her house and in the process of talking with her, the gang members entered her house and robbed a gold chain weighing 25 grams, a gold bracelet and a gold ring. They had also robbed C. Chandru, a retired employee of BSNL on 5.9.2020 when he was walking near Akkamahadevi Circle on Ring Road. They cornered Chandru, flashed daggers and robbed a gold chain weighing 15 grams.

The Police recovered ornaments worth Rs. 1.5 lakh from the duo. The Police were finding the cases challenging as the gang members never stayed at one place. They avoided their relatives’ homes and even did not stay in lodges. They used to eat street food and slept in front of buildings and commercial complexes. To avoid tracking they changed SIM cards, cops said.

Police got the first breakthrough when they arrested Sharath who was the gang leader. From him they elicited information about other members of the gang. Though their identities were established, it was difficult to track them.

The Police then relied on the technical team that tracked the phone tower locations. Finally the arrests were made. The Police are on the lookout for the absconding three gang members.

2 COMMENTS ON THIS POST To “Dacoits robbing morning walkers held”