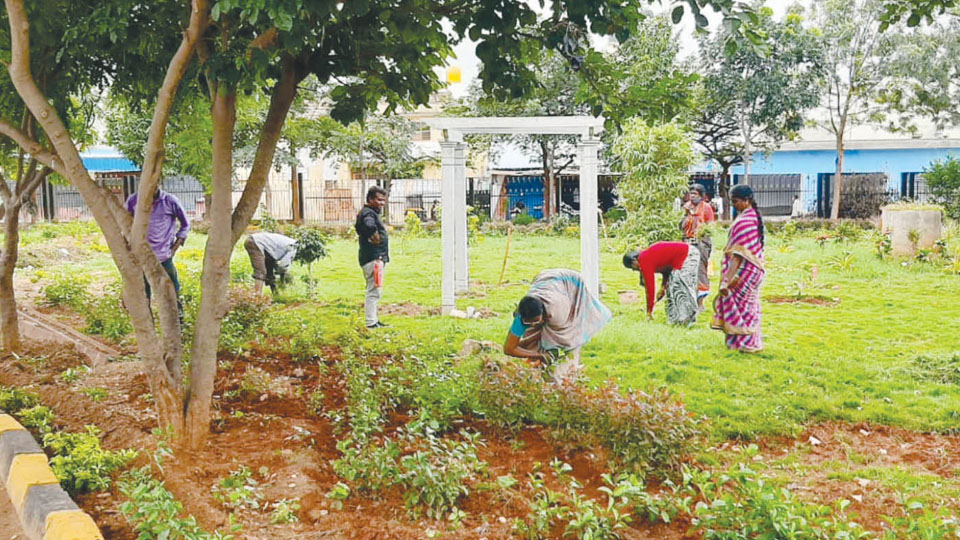 Mysore/Mysuru: A facelift has been given to Jogi Siddaiah Park at Gandhinagar which comes under Ward No. 27 in city. The entire Park has been cleaned and planted with saplings of different species.

The Park was developed at an estimated cost of Rs. 50 lakh. Gym equipment worth Rs. 5 lakh has been installed apart from other developmental works including erection of iron grills, all at a cost of Rs. 46 lakh, Shwetha, Engineer, Mysuru City Corporation (MCC), told Star of Mysore.

The density of population is more in Gandhinagar and people dump garbage inside and outside the Park. As a few mutton stalls are located adjacent to the Park, animal waste and bones were dumped inside. “All these will be stopped and the Park has been developed for the sake of local people,” Ismail, who is in-charge of this Park, said.

The Jogi Siddaiah Park is small and situated at the centre of Gandhinagar. “It needs to be fully developed. Since the beginning, people have been dumping garbage inside and harming trees. Development has been taken up despite all these hardships. Cooperation of people is a must,” opined Mohammed Rafiq, local Corporator.

Gandhinagar Jogi Siddaiah Park Mysuru City Corporation
In rush for immunity, Ayurveda is a safe bet
No Boating in Ranganathittu