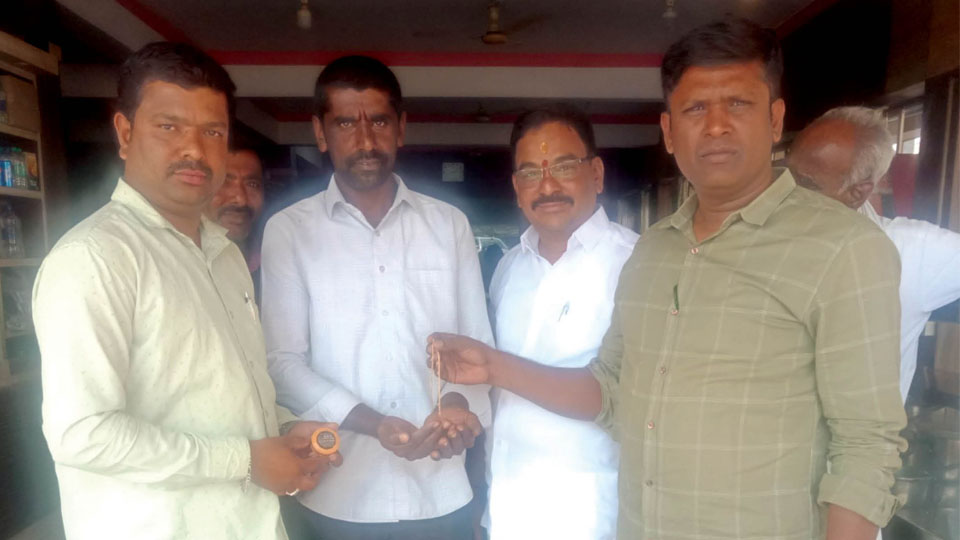 Periyapatna: A journalist, who found a box containing gold earrings at a hotel in Periyapatna, has returned the same to the rightful owner, thus displaying his honesty.

On Monday, journalist Bekkare Satish Aradhya, who had gone to a hotel for lunch, along with his friends Anand and Deviprasad, noticed a small box under the dining table.

When he took the box and opened it, he found a pair of gold earrings in the box. The earrings, worth about Rs. 50,000, weighed about 8 grams. Aradhya then went to the hotel owner and told him that he had found Rs. 2,000 near the table and asked the hotel owner to contact him on his phone in case anyone comes searching for it.

When he was about leave the hotel, Aradhya notices Taluk Panchayat Executive Officer (EO) C.R. Krishnakumar entering the hotel and Aradhya informs him about the gold earrings.

He then decided to wait for some more time in the hotel anticipating that the person, who had lost the gold earrings, may return to the hotel in search of it.

While waiting in the hotel, Aradhya notices Gram Panchayat Member Ravi of Bhutanahalli in the taluk searing for something near the table and enquired him during which, Ravi tells Aradhya that he was looking for a small box with gold earrings in it, which he had lost in the hotel while having lunch with his family.