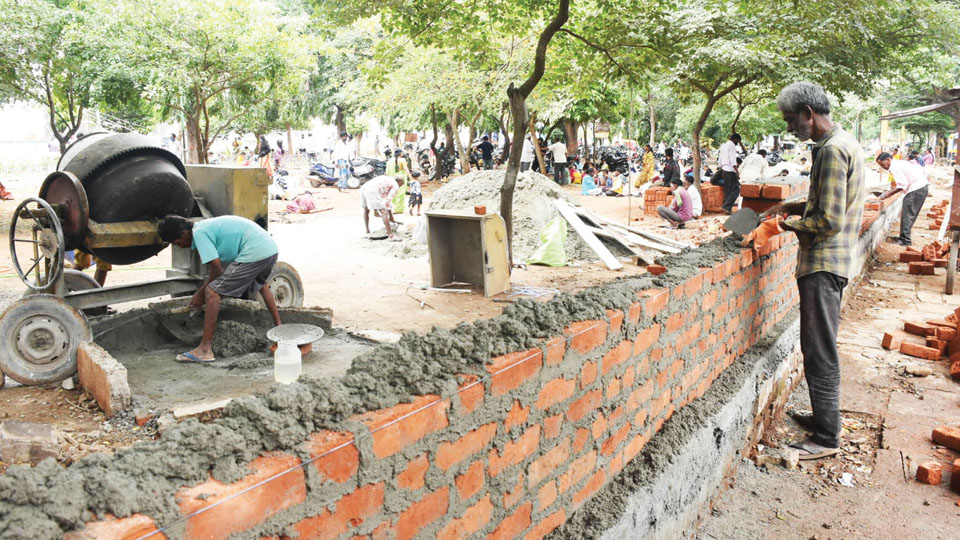 K.R. Hospital to be more secure with compound wall

Mysore/Mysuru: To ensure the protection of patients, families, visitors and the general public along with staff, a high protective wall is being built along the compound of the century-old K.R. Hospital. The wall is being built in such a way that it does not disturb the heritage structure of the building.

The present height of the wall is three feet and at several places the grills have been cut off and stolen by miscreants. This has created entry points at various places where people can easily gain access inside, also leading to many thefts of valuables as even the escape route to the main road is easy.

Dean of Mysore Medical College and Research Institute (MMC&RI) Dr. C.P. Nanjaraj had sent a proposal to the Medical Education Department that has sanctioned the works of the compound wall estimated to be at Rs. 30 lakh. The work on the wall and fixing of grills is being taken up under the grants from Karnataka Health Rural Development Project (KHRDP).

Speaking to Star of Mysore, KHRDP Engineer Doreswamy said that the K.R. Hospital has a compound wall that extends up to 1,20 metres and it has good height near J.K. Grounds and Dhanvantri Road. Now the works are on to build 800-metre wall around the area near Irwin Road and Sayyaji Rao Road. Grills will be laid and gates will be constructed at places where they are needed, he said.

In view of strengthening security, talks are on to shut many gates that give unrestricted access and establish single entry and exit point and post security personnel. This will be taken up after works on the wall is completed and after discussion with Police, MMC&RI sources said.