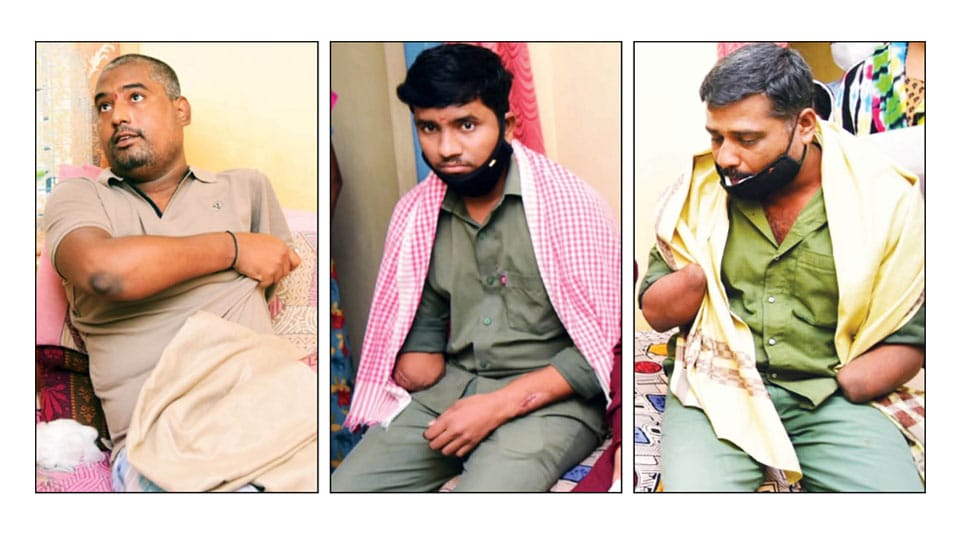 Mysore/Mysuru: How many times have we complained about the power situation in our areas, the lack of continuous power supply, single phase supply, exorbitant bills and the likes?

But have we given a thought about the people who repair the faulty lines? Have we ever thought about how these linemen keep power supply uninterrupted and attend to all our complaints, irrespective of time or weather conditions?

Linemen are always understaffed, overworked, stressed out and many times climb high-tension poles without any safety gears, resulting in deaths and injuries.

Shockingly, the way they are treated after they sustain injuries while in the line of duty clearly shows that there is a lack of will, commitment and even morality in the administration and the Government.

In Karnataka, between 2015 and 2020, over 40 linemen have suffered permanent disabilities and some of them are from Mysuru too.

Star of Mysore met 40-year-old N. Basavaraj, a lineman in Chamundeshwari Electricity Supply Corporation (CESC). He started working in CESC in 2007 as a member of the mazdoor team. He became a permanent employee after 2010 and was happy that he landed in a secure job. Little did he know that his life would be shattered forever after May 22, 2014.

On that day, Basavaraj was working in Pandavapura Division (K.R. Pet Sub-Division) where a Junior Engineer instructed him to climb an electric pole and repair a faulty line. On top of the pole, Basavaraj suffered a massive electric shock due to a wrong Line Clear (LC) signal. His hands, left leg and a major portion of his back were burnt completely.

Immediately, he was shifted to a Government Hospital and the doctors referred him to a  Private Hospital where he underwent a surgery. Both his hands were amputated and he was maimed. His back was twisted and the power flow damaged the epidermis and the dermis to make it look like a charred surface. There was no life in it though the burnt part stayed on,  attached to his spinal cord.

After both his hands were amputated and with a lifeless and painful back, Basavaraj lost all self-confidence which made him feel insecure. He remained confined to the four walls of his house for a long time, depressed and having no hope.

Now, he is physically and mentally dependent on his home-maker wife Shruthi for all his basic daily needs. A teary-eyed Basavaraj shared with SOM his painful journey from being normal to a permanently disabled person. “My fate and my family’s destiny changed for the worse permanently. I pray every day that no one should go through this hell,” he sighed.

“When I look back at the 2014 incident, I wish it wouldn’t have happened to me. I have two daughters and a wife to look after. Now (in the year 2021) also my designation is lineman and I am getting a salary from CESC. But I get worried when I think about the future of my children. After the accident, I did not receive any compensation from the State Government. I wish CESC would have shown some mercy on us and provided financial help,” he said with a sad look on his face.

“I need to take care of my family for which I need prosthetics that costs from Rs. 3 lakh to Rs. 10 lakh. I request the State Government to provide financial assistance for the surgery,” he added.

Basavaraj’s wife Shruthi said “It has been seven years that my husband is living with the disability and he never expresses his pain openly to me. I request CESC or Government or even any NGO to come forward to help us with prosthetic hands. My elder daughter is in sixth standard and younger one is in third,” she added.

No salary for one year

Basavaraj is not the only one who has been maimed. One can see many such linemen at the KEB (CESC) Quarters in Jyothinagar.

The 33-year-old Mallikarjun Mayammanavar hails from Gadag District and he lost one hand, a leg while the left side of his body has been burnt. The tragedy struck after he had just completed a month in CESC.

“The incident took place on Feb. 22, 2015 in Srimangala (Gonikoppal Sub-Division) in South Kodagu at around 6.40 pm between Srimangala and Kutta village line. I was a trainee and had just joined in January. Trainees are not supposed to work as linemen. But a senior lineman asked me to climb the electric pole and check the double circuit. Due to some miscommunication, I suffered a massive shock and was catapulted to the ground,” he narrated.

His left side of the body was completely burnt and he lost one arm and the left leg. He was bed-ridden for months. “I have a father, wife and daughter to look after. The State Government paid my medical expenses of Rs. 14 lakh but I did not receive salary for one year in 2017. No insurance amount reached our hands and I need to undergo another surgery which will cost Rs.2 lakh. I request the Department officials to bring it to the notice of the State Government and help me emerge from the dark phase of my life,” added Mallikarjun, with his voice choked.

One of the officials from CESC, on condition of anonymity, told Star of Mysore that more than 40 linemen suffered permanent disability in the accidents which took place between 2015 and 2020 in Karnataka and more than 15 linemen were electrocuted.

“Every year we witness 2 to 3 deaths of linemen. No security is provided to linemen and there is no life insurance. The State Government is not bothered about lives. Giving assurances to family members will not help,” he added.

Vice-President of KPTCL Employees Union H.V. Sandeep said, “CESC is facing shortage of employees both in urban and rural areas. There must be a change in the rule to make a family member of the disabled lineman get a job on compassionate grounds if there is 100 percent disability.”

“According to medical science no doctor or hospital will issue a report on 100 percent disability which is equal to being dead. Doctors always mention 70 to 80% disabilities and this is a disadvantage for the victims and families,” he added.

Recently, Energy Minister V. Sunil Kumar paid a visit to the Jyothinagar Quarters in Mysuru where he assured to provide jobs for the family members of disabled linemen. Also he made a promise to get financial assistance from the Government to enable them to lead a normal life like others. It remains to be seen if the promises are fulfilled or will it remain a mere lip sympathy.

2 COMMENTS ON THIS POST To “Linemen maimed but system callous”