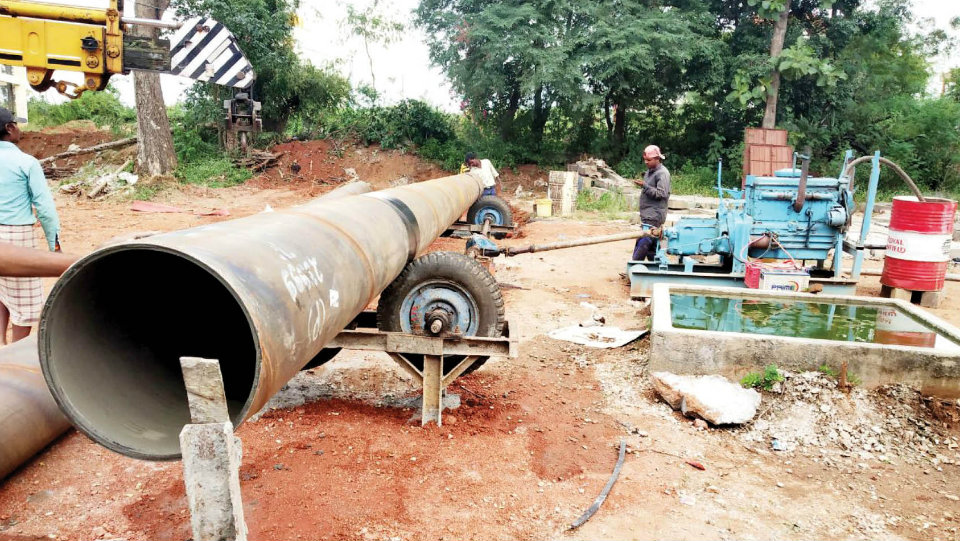 Mysuru:  Here is some good news for site owners wishing to construct houses in R.T. Nagar, one of the largest layouts developed by the Mysuru Urban Development Authority (MUDA). Water and electricity connections will be provided by February next year (2020).

The R.T. Nagar Layout was formed along the Ring Road adjoining Kanakadasanagar and University Layouts in a vast area of 219 acres. The land acquisition process was completed in 1993-1994 and the sites were distributed in June 2017. The layout comes under different survey numbers of Kergalli and 2,172 sites of various dimensions have been formed.

The R.T. Nagar Layout is a well-planned layout and has been designed according to international standards with wide roads, good drainage and electricity supply facilities, spaces for greenery and civic amenities. The layout was designed in such a way that even if Mysuru grew in leaps and bounds, the R.T. Nagar Layout would never be a haphazardly developed area. The layout has designated parks, open spaces that can be converted into green areas and has a 100 feet road that has access to Ring Road.

Speaking to Star of Mysore, MUDA Executive Engineer in-charge of R.T. Nagar Nagesh said that the Chamundeshwari Electricity Supply Corporation (CESC) and the Karnataka Urban Water Supply and Drainage Board (KUWS&DB) had the responsibility of providing water and electricity connections.

“Water will be supplied from Kabini and we have paid Rs. 2.70 crore and the process of laying the pipelines, motor pumps and mapping of the area is on. We have already allotted tenders for the work. All works will be completed by January and February next year and connections will be provided,’ he said.

KUWS&DB Executive Engineer Prasanna Murthy said that the pipeline laying works were under progress and Tumakuru-based MNR Company has been awarded the tenders. The connecting pipelines have to be laid for the water supply from the main lines. Works are under progress at Vijayanagar Fourth Stage near KSRTC Depot (Hinkal Junction). Cement concrete pipes are being prepared to supply water, he added.

On power supply, Nagesh said that the MUDA is waiting for an approval from the Government. “We have purposefully delayed this as once the power lines are laid, there has to be a protection mechanism. Otherwise miscreants will steal streetlight bulbs and other wires. MUDA has already received 250 to 300 house plan approvals from site owners. It will be easy to provide power connections once people start residing in the layout,” he said.

Of the 2,172 sites of various dimensions, there are 350 corner sites and 1.2 acres of commercial property through which MUDA plans to mop up revenues. For water facilities, one over-head tank and one ground-level tank that can hold up to 10 lakh litres of water each have been constructed.

Also, a giant tank has been constructed under NURM project that can store up to 50 lakh litres. Not a single road in the layout is less than 40 ft and most of the roads are 80 to 100 ft wide. Already over 20 houses have been built and occupied by residents and many more are under construction. A majority of site owners are waiting for water and electricity connections.

Compared to other layouts in city and its surroundings, R.T. Nagar has seen a fast growth due to its well-planned nature. In Vijayanagar 4th Stage, 12,000 sites have been formed in a 1,000-acre land in 1994 and only 40 percent of the area is occupied. Over 822 sites were distributed in Lalithadrinagar North and 1,667 sites in Lalithadrinagar South in an area of 267 acres. This layout was formed in 1998 and 90 percent of the sites are vacant now.

R.T. Nagar is surrounded by Kergalli, Dattagalli and has easy access to Ring Road. Other Layouts in the vicinity are Mysuru Journalists Association Layout, Mysore University Layout, Government Employees Housing Co-operative Society Layout and Forest Department Employees Layout. All these layouts are yet to be populated.