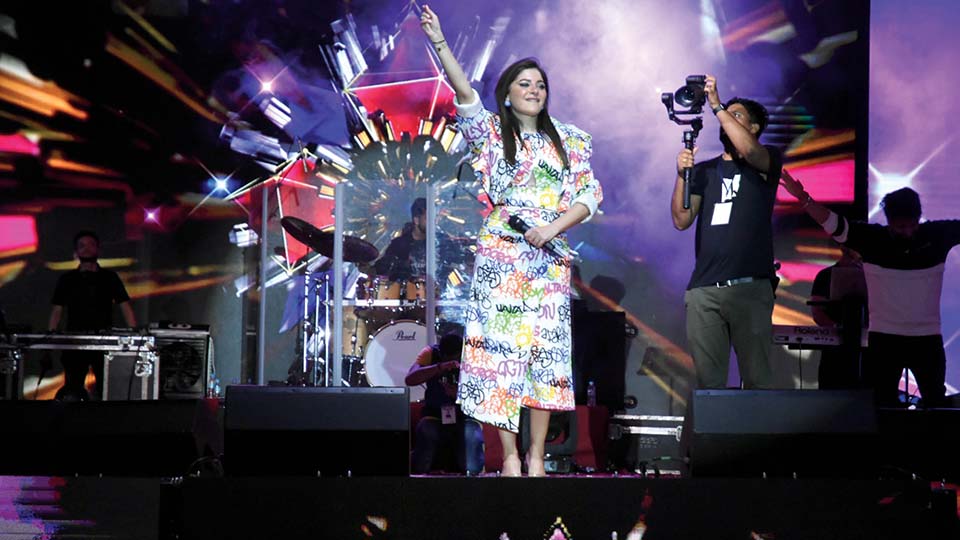 Her song from Pushpa: The Rise (2021), ‘Oo Bolega Ya Oo Oo’, was by far the most popular tune of last evening and the audience just couldn’t get enough of the singer. It was a night to remember for her fans and everyone who loves great music.

The Maharaja’s College Grounds became an open ground for dance and revelry as Kanika Kapoor sang hit numbers and also encouraged the audience to sing with her. As the crowds on the front row were seated silently and with the crowds at the back howling and cheering at her, the singer said, “I want to go there”, further enthusing the crowd.

Kanika Kapoor’s musical journey started in 2012, but her professional career took off only after 2014. Known for her songs like ‘Jugni’, ‘Baby Doll’ and ‘Chittiyaan Kalaiyaan’, Kapoor has had quite a journey.

While the COVID pandemic had put a dampener on live concerts for the last two years, last night’s performance signalled that the pandemic is over and people can enjoy a smashing musical experience without any precautions.

Kanika Kapoor, who has managed to seamlessly fuse elegance with a rock star image, left fans mesmerised with her mellifluous, earthy voice. She belted out some of her most popular numbers from her hit repertoire of songs that had the audience clamouring for more.

Apart from Kanika Kapoor who entertained the crowd, a good impression was made by dancer Sridhar Jain and troupe performed dances for popular numbers and gained a huge round of applause. There were many other performances for the evening like Navadurge Darshana, Navashakthi Vaibhava by Nisarga PU College, Kollegal.

The spirit of national integration was high with the performance of Punjabi dance, Yakshagana and Mohiniattam from the South by the students of Sadvidya Composite PU College students. The speciality of Indian cinema was brought on stage by the artistes of Mysuru Nruthyagaara Sangha through dances from Kannada, Telugu and Hindi movies.

Music directors Pavan and Rudra of Dance Karnataka Dance presented many foot-tapping dance numbers, entertaining the crowd. Viance team from Mangaluru performed a dance event that highlighted the culture of the coastal belt.