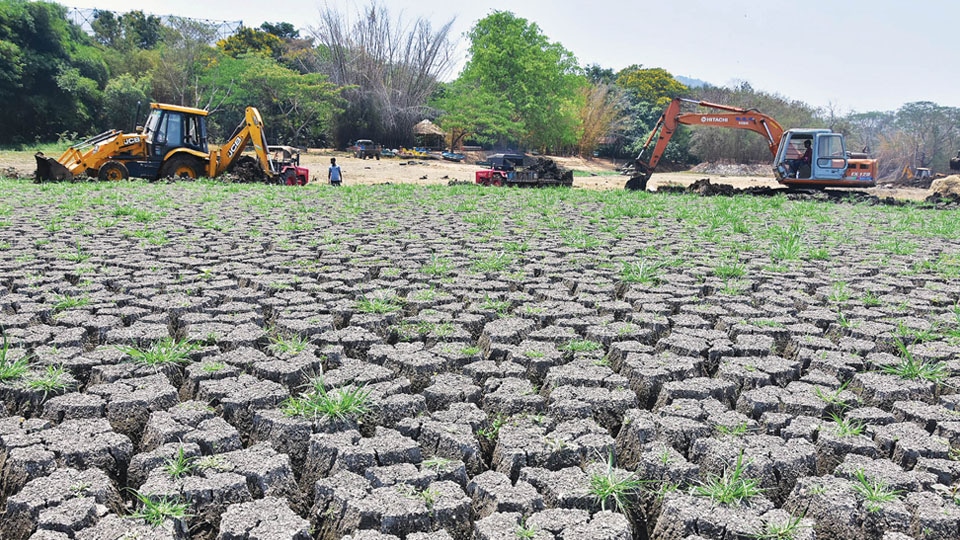 Mysuru: After a gap of 15 years, silt removal is going on in full   swing at the picturesque Karanji Lake in the premises of Mysuru Zoo with a couple of earth movers, tippers and tractors involved in the work.

The desilting has been necessitated as the Lake, one of the tourist hot-spots in city, is rapidly going dry. The drying process this year began even before the onset of summer and the Zoo Authority that manages the Lake had stopped boating activity from Feb. 8. Lack of rains last year is being cited as the prime reason for the drop in water level.

Speaking to Star of Mysore this morning, Zoo Executive Director Ajit M. Kulkarni said that the Zoo Management had taken a decision to desilt the Lake to ensure the presence of water inside the Lake even during summer and whenever there is deficient rain.

“We have commenced desilting and development of islands in a scientific manner. There are over five islands around the Lake and desilting works are being taken up to develop two islands.

“We are undertaking the work on a war-footing and will complete before monsoon sets in. Time permitting, the desilting works will be taken up to develop one more island,” he  added.

The Zoo Management is taking the guidance of naturalist U.N. Ravikumar, who is also a wetland specialist. “Usually, desilting leaves the earth gaping and we are desilting in such a way that the wetland is retained. We are following a scientific ‘drawdown method’ where water is retained at the centre and also at the sides of the desilted area,” Ajit Kulkarni stated.

The initial estimate for the desilting process is Rs. 9 lakh to Rs. 10 lakh and if rain permits, the works will be extended to other areas of the Lake and here, the budget will increase, he explained. Once the rain starts pouring, the entire area will turn slushy and we cannot do anything, he added.

Located behind the Zoo, Karanji Lake is a good example of wetland ecosystem and is a home to many local and migratory birds. Boating in Karanji Lake is the best way to get a close look at the birds and a wide variety of birds can be spotted. Of late, this is for the first time the Lake is being desilted. “The Lake was desilted 15 years back and after that we have initiated the process now,” he said. On the shortage of water for birds, the Zoo Executive Director said that most of the birds that visit Karanji Lake now are migratory species that come here to feed. “After feeding, the birds return to Ranganathittu. For other birds, we have sufficient water to tide over summer,” he added.

According to environmentalists, as the Karanji Lake is dry, now is the best time to desilt it. Also, the Lake can be cleansed of effluents and sewage that flow into the water body from neighbouring localities.

They said that the absence of Rajakaluves (natural underground water drains) in the Karanji Lake premises has caused the Lake to be more polluted. If silt is removed now and the Lake is cleaned, enough water can be stored in monsoon, they felt.

3 COMMENTS ON THIS POST To “Karanji Lake Desilting work begins”