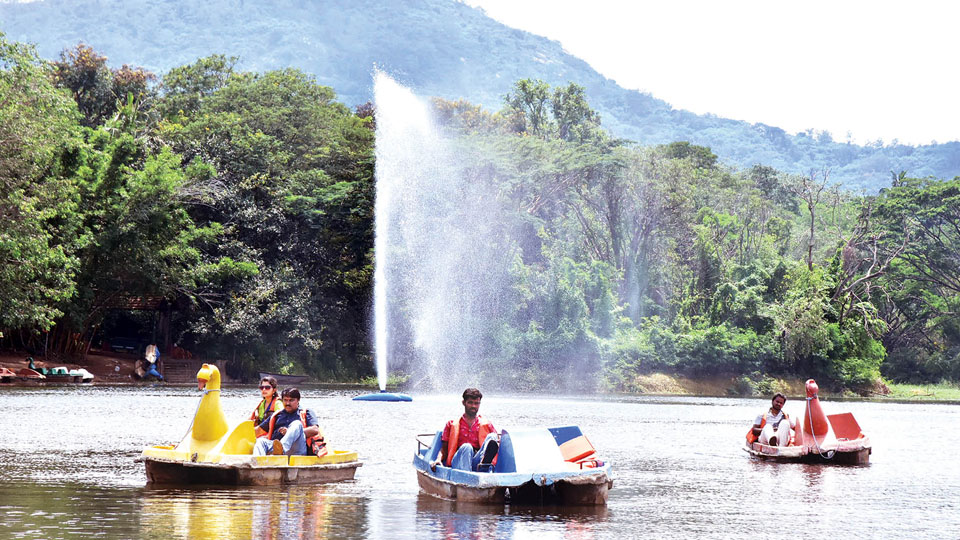 Mysuru: Karanji Lake that supports a rich and rare biodiversity has regained its pristine beauty and is full of water now. As such, the much-loved boating activity in the Lake that was suspended in the month of February due to lack of water has resumed, pulling a large number of tourists.

The Lake is maintained by Sri Chamarajendra Zoological Gardens or Mysuru Zoo and it is a good example of wetland ecosystem and is a home to many local and migratory birds. Water has filled the Lake due to constant efforts of the Zoo authorities including scientific desilting and clearing of Rajakaluves that naturally bring in water to the Lake from Chamundi Hill.

Karanji Lake per se is 30 to 35 acres and including its outer boundaries and green landscape, it measures 79 acres. Silt had filled the Lake and it had not been desilted since the last 25 years. The desilting of the Lake began in March this year after getting clearance from the District Lake Authority. Rs. 9.50 lakh was spent on scientific desilting.

Speaking to Star of Mysore this morning, Zoo Executive Director Ajit M. Kulkarni said that desilting was necessitated as the Lake was rapidly going dry ringing alarm bells. The Lake was desilted in such a way that the wetland was retained and only the central part that has the capacity to hold water was dug up. This process was called ‘drawdown method’ where water is retained at the centre and also at the sides.

The Zoo management took the guidance of Naturalist U.N. Ravikumar, who is also a wetland specialist, to desilt the Lake. “While desilting, the Lake’s natural environs including undulated surfaces were taken care of. We took care of the biodiversity and left out the Lake bund where reptiles and other living organisms including fish usually take shelter. Only the old layers that have been accumulated over the years were removed,” Kulkarni said.

READ ALSO  Mysuru: A plan for the future

The desilted area was cleared of clay (Jedi Mannu) that has been accumulated since 1986. Also the soil deposits that flowed into the Lake from layout constructions in surrounding areas and sewage deposits were cleared.

“Over 16,000 cubic meters of the Lake has been desilted in the works that were completed in one-and-a-half months. We have ensured that the water holding capacity is increased to the maximum. The desilting areas have been deepened and the islands are formed to retain the soil. Now the islands have attained their natural shape,”  he said.

Though this year’s monsoon did not help to fill water, heavy rains atop Chamundi Hill since Oct. 5 have resulted in the Lake filling to its brim. The major source of water for the Lake is rain water from Chamundi Hill.

The Zoo Executive Director also said that boating activity that was stopped in the first week of February this year has resumed on Oct. 5. “We have four pedal boats and two rowing boats. Motor boats are banned inside the Lake. The filling up of the Lake has also resulted in increase of ground water table in the Lake and surrounding areas,” he added.