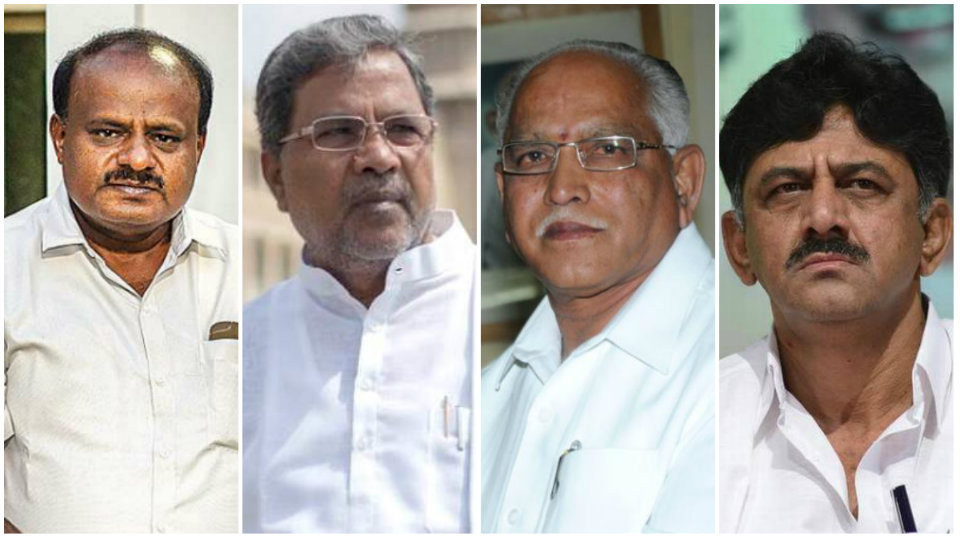 At last, 11 days after the election results came out, on 15th May 2018, Karnataka got its new Government with much drama and suspense.

Now is the time for sharing the spoils of election-war. Without wasting time, the top leaders engaged themselves in the Ministry formation exercise immediately after the Assembly was adjourned following the trust vote.

And look at the line-up of these top leaders. The Chief Minister H.D. Kumaraswamy, his brother H.D. Revanna, former Congress Chief Minister Siddharamaiah, AICC General Secretary in-charge of Karnataka K.C. Venugopal and the Deputy Chief Minister Dr. G. Parameshwara. Two from JD(S) (being brothers, a family affair) and three from the Congress.

In this meeting, JD(S) demanded five key portfolios, considered gold mines, namely Finance, Revenue, Water Resources (Irrigation, I guess), PWD and Energy. In the Siddharamaiah Government, Energy was held by the “Khalnayak” of Congress D.K. Shivakumar. You know what it means! During the election campaign I was returning from Bengaluru in my car and I saw some necks in the car in front craning backwards. I instinctively did the same and whom do I see? D.K. Shivakumar seated in the front seat of his BMW, Suv. I smiled at the “hero” (as mentioned by the Speaker yesterday in the Assembly) and he returned the smile as he drove past me. I wonder if he recognised me, having met him only twice before… Let it be.

The point to ponder here is that while the JD(S) could decide on their demands on the spot, the Congress members said they would discuss with the High Command in Delhi before taking a final decision. No wonder, our contributor Senior Journalist R.P. Jagadeesh had written only a few days back in this paper that henceforth Congress in Karnataka will have two High Commands. One, the Congress in Delhi and other the JD(S) in Bengaluru. How prophetic and how true!

Be that as it may, I am just wondering if all the MLAs of all the parties in the present Assembly are honourable. Obviously yes. Otherwise, how could they get the tickets to contest? The Representation of the People Act, which decides on the qualification of the candidates, must have ensured only the ‘honourable’ members are given ticket to contest the election. And here they are. Alleluia!!

READ ALSO  Believe It or Not!

However, I am left wondering how come BJP could rehabilitate the Reddy brothers of Ballari, who are accused of illegal mining and the Congress, not to be left behind, gave tickets to many tainted persons? May be because, in Karnataka, corruption has become a non-issue, as Justice Santosh Hegde, former Lokayukta, says. He must know. Hamam mein sab nange hain, in the bathroom all are naked.

But, let me look at some of these top honourable men. Let me start with Chief Minister H.D. Kumaraswamy. According to The Hindu, he has seven cases, four related to illegal mining and three related to denotification of land. Who knows, the nemesis may soon catch up with the Chief Minister…

Luckily, Siddharamaiah, who is now an MLA from Badami, has no cases against him. Not that he was a paragon of virtue, only he is intelligent and smart enough to get himself a clean chit while still in power. He was accused in the Arkavathy Layout re-modification scheme. He was accused of denotifying over 900 acres of land. Wah! Later a judicial inquiry cleared his name. Sadly, for B.S. Yeddyurappa, it was Lokayukta with a former Supreme Court Judge Santosh Hegde presiding over it became his nemesis and got himself damned and sent to jail because he was refused bail (at a time bail was a right). Lack of luck! These observations of mine do not mean I countenance corruption. It means all accused must be treated even-handedly by those who dispense justice.

Siddharamaiah was also caught in the snare of a Hublot Rs. 80 lakh super-luxury wrist watch which he received allegedly as a bribe! He managed to escape from the case claiming it to be a gift and in time, wisely, handed it over to the Assembly Speaker. No case could be filed even by the habitual PIL warriors! Alleluia again.

Lucky again. Bengaluru environmentalists and the concerned citizens were up in arms against Siddharamaiah and his Minister K.J. George about the steel flyover project to ease traffic to Kempegowda International Airport at Devanahalli. Kickback, screamed the well-meaning commuters of Bengaluru.

An alleged diary entry found during an IT raid at Congress MLC Govindaraj’s house showed an entry that the party had received Rs. 65 crore kickback for construction of a steel flyover. The charge fizzled out as the steel flyover project itself was shelved. Siddu is indeed an honourable man.

As for Yeddyurappa, who like Hamlet is a tragic hero of Karnataka politics, there is no corruption case pending against him. However, appeals against the Lower Courts’ decisions clearing him are pending before the Supreme Court. Any adverse decision there would lead to 20 cases of corruption being reopened. Considering this, I guess that he must have been a soft-target for the habitual PIL warriors. Wonder, how he could make himself so vulnerable being in public life when others like Siddharamaiah could play the game  as a winner!

Then there is D.K. Shivakumar, a potential future Chief Minister of Karnataka, against whom an IT raid was held in August 2017 and the case is now before the ED. There were some forest land-grabbing cases also but they were probably politically motivated ones. So he is an honourable man too.

Likewise, we have our honourable men in our Assembly representing us to serve all the people of Karnataka to lead a prosperous, happy and peaceful life for another five years, hopefully.

Best of luck to Congress-JD(S) coalition Government. BJP can now go into a silent-mode till 2019.