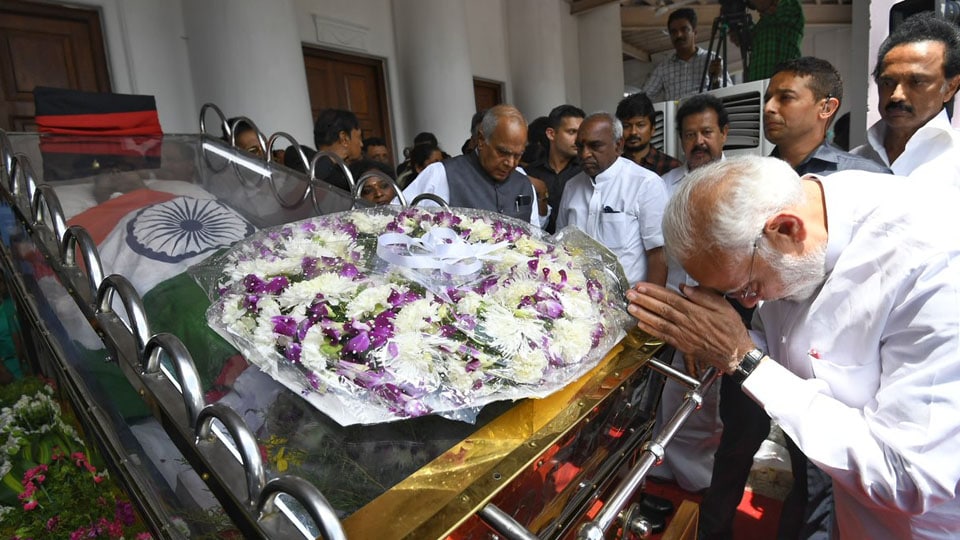 Karunanidhi to be buried at Marina Beach after Court drama

Chennai:  Dravida Munnetra Kazhagam (DMK) patriarch Muthuvel Karunanidhi will have a burial site at Chennai’s Marina Beach, the Madras High Court decided this morning, ending an ugly political row as thousands mourned the death of the last of the towering politicians in Tamil Nadu.

The ruling AIADMK had denied permission for the five-time Chief Minister’s memorial at the Marina Beach.

The Madras High Court sat around midnight at the home of Acting Chief Justice Huluvadi G. Ramesh to hear DMK’s petition after the AIADMK, its life-long rival, refused its request. Karunanidhi, who dominated the State’s politics for six decades along with arch-rivals M.G. Ramachandran and later J. Jayalalithaa, died at 94 last evening.

Karunanidhi, the charismatic leader and the oldest political leader in India who ruled the political arena for more than six decades fighting for regional aspirations, has left a huge political vacuum in TN. He breathed his last at the ICU of Kauvery Hospital, where he was admitted on July 28 due to a drop in blood pressure, at 6.10 pm despite efforts to resuscitate him.

The DMK chief, who is survived by two wives Dayalau Ammal and Rajathi Ammal and four sons and two daughters – M.K. Muthu (born to Padmavathi), M.K. Alagiri, M.K. Stalin, M.K. Thamizharasu, Selvi, (born to Dayalu Ammal) and Kanimozhi (born to Rajathi Ammal) – was confined to his home since October 2016, except for his hospital visits every six months to change his tracheotomy tube.

Karunanidhi married Dayalu Ammal after the death of Padmavathi, his first wife. Later, he married Rajathi Ammal. While Kanimozhi is now a Rajya Sabha MP, Muthu is an actor, singer and a member of AIADMK. Alagiri is now a Union Cabinet Minister and Stalin is serving as working president of DMK.

As thousands visited Rajaji Hall in Chennai to pay tributes to Karunanidhi, whose body was in a glass coffin, wrapped in the national flag, the Madras High Court resumed its hearing this morning. The ruling party said only Chief Ministers who had died in office have burial sites at the Marina Beach. There is no such law, the DMK responded.

The DMK says the AIADMK’s refusal to give land to bury their leader next to his mentor C.N. Annadurai’s grave “reeks of pettiness and political vendetta”. The government offered a two-acre plot near Gandhi Mandapam, the memorial dedicated to Mahatma Gandhi, as a burial site. “That cannot be termed as a decent burial. Those buried there have ideologies different from the Dravidian movement,” the DMK argued in court.

Hearing the case, the High Court granted permission to bury Karunanidhi behind Anna Samadhi on Marina Beach. The Court said as a five-time CM, Karunanidhi deserves the stature of being buried at Marina Beach among the State stalwarts. The Court order led to emotional scenes at Rajaji Hall, as Karunanidhi’s son Stalin and senior leaders broke into tears. Stalin, who was standing by his father’s mortal remains, was seen being consoled by his associates and party leaders. Party leader A. Raja hugged him as the crowd shouted in relief.

PM pays homage: Prime Minister Narendra Modi paid tribute to Karunanidhi at the Rajaji Hall. Clad in white, Modi laid a wreath at Karunanidhi’s feet and bowed before his mortal remains, paying his respect to the late leader. He later consoled the DMK chief’s family members, including his wife Rajathi and son Stalin.

Modi, who arrived here from New Delhi by a special flight, was accompanied by Tamil Nadu Governor Banwarilal Purohit, Defence Minister Nirmala Sitharaman and State unit leaders of the BJP, besides those of the DMK and the AIADMK. He later had a brief conversation with Rajathi. He exchanged a few words with Stalin, the DMK’s working president, gently patting him on the back in an apparent gesture of consoling him.

Congress President Rahul Gandhi and chief ministers of several States are expected to fly in to Chennai to pay their homage. Tamil Nadu Chief Minister K Palaniswami and his deputy O. Panneerselvam also paid their respects. The mortal remains of the leader will be taken to Marina Beach for burial after 4 pm.