Home » Feature Articles » When the ‘Kirik Party’ beauty was in town… 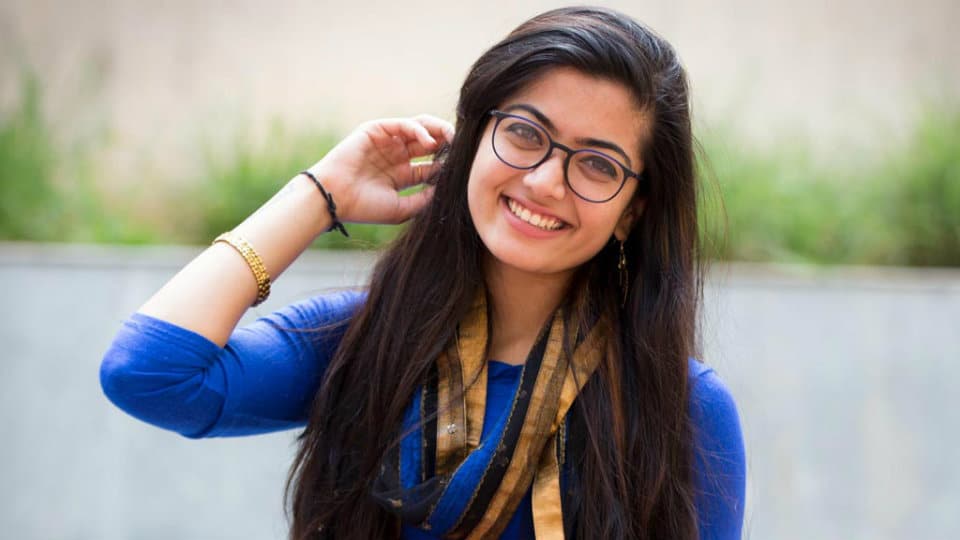 When the ‘Kirik Party’ beauty was in town…

This damsel is just one-movie-old in the Kannada film industry. Yet, youngsters, the young lads rather, drool over her beauty that with no second thought they utter: “Of late Rashmika is my most favourite, actress” the moment they are asked: “Who is your favourite Kannada actress?”

Rashmika Mandanna, the hottie from Kodagu, was in city recently to attend the annual fest at her alma mater Mysore Institute of Commerce and Arts (MICA). In a candid chat with Star of Mysore, she opened up about her first movie, the overnight fame, her upcoming projects and more. Excerpts…

Star of Mysore (SOM): You are a fresh face into the Kannada movie industry. And the viewers have accepted you very well with the first film. How does that feel?

Rashmika: I feel very honoured. I have no words to express how exactly it feels but I’m touched. I always thought I will slowly settle and go with the grove but when things changed overnight it took me a while to digest it. I will do my best to keep up to the canon now set.

SOM: How did the movie ‘Kirik Party’ actually happen? How was the experience?

Rashmika: How I got selected for the movie is an interesting story. I happened to win the Clean & Clear Fresh Face of India contest in 2014 and my pictures were available on google post. I believe, when they were on the lookout for an actress for the movie, they happened to search for ‘Bangalore Girls’ on net and my pictures showed up (giggles). Thus, I got called, selected and the rest followed. It is a wonderful break, I must say.

SOM: Many people, who have watched the movie, especially the youngsters have fallen in love with Saanvi – the character you have played in the movie. Probably many even know you or call you only by that name now. The character has been very well received. What would you like to say about it? Is Rashmika like Saanvi  in real life too?

Rashmika: Yes. The character of Saanvi which I have played in the movie is very connective. 60 percent of what I am is similar to how Saanvi is portrayed in the movie. Except for the part where she is someone very good at speaking and writing Kannada, the character resembles my real life too.

SOM: What are your upcoming projects? We hear you have movies coming with some big names of the industry next?

SOM: Many girls from Coorg have been entering the Kannada film industry since a few years now. How and why so?

Rashmika: Yes. Coorg girls are basically known for being actively involved in cultural activities so they very well qualify to be there. And then, we Coorgis in general are very diverse. We involve ourselves in all fields from politics to modelling and acting and much more. However, most of them have not really stood out so evidently since they are very subtle in what they do. I feel really very lucky and happy to have made it into the film industry with all the other Coorg girls. I can say it’s a proud moment for me.

SOM: Even before the film was launched, you had become a popular face with a huge fan following. Your reaction to it…

Rashmika: I really have no words! (Sighs and smiles). It definitely feels great. But I hadn’t really expected such a huge turnout in my life at such an early stage of my career. I always thought it will take some time and that I will slowly get into the groove while things will change gradually with time. But this sudden uproar and acceptance is an overnight alteration.

I do have a lot of good support and since I have also been proactive with my modelling campaigns, it helped me reach out to people.

READ ALSO  After ‘Kirik’, Chandan aims for a bigger ‘Party’

SOM: Where in Kodagu and which family there do you belong to?

Rashmika: I hail from Virajpet in Kodagu from the Mundachadira family. But my screen name remains Rashmika Mandanna.

SOM: Do you keep visiting Mysuru and Coorg?

Rashmika: Not really. Since the time work started, I couldn’t really come much this way. Every time I am in Mysuru, my hometown is just two hours away I realise and crave to visit home. But I do not have that kind of time now. So with a hard heart I take a U-turn and get back to wherever my work takes me as that is what needs my concentration now.

SOM: Any movie offers from Bollywood?

Rashmika: Yes. I have got offers from Bollywood too. I would be lying if I say no. But I think it all depends on how things will turn out to be in future until then I can’t say anything much about it.

SOM: But how difficulty or easy is it for a South Indian, new-comer and someone from the Kannada film industry to make it to Bollywood or make it big in the field of modelling?

Rashmika: I in fact feel and find acting easier than modelling. But since I have just started working, I do not want to judge. It is too early to ponder over it. So I am just going with the flow. I get a call saying I need to do this work or be present at a certain place at a certain time and I go do my work with dedication. If I find the work interesting, I take it up.

SOM: How does it feel to be back in college as a celebrity?

Rashmika:  As a student, I always wanted to come back to college as a guest or a participant. It was some sort of dream. But this kind of a welcome or invite is something I never expected. It feels very nice. I feel like I have grown. I still remember roaming around MICA and thought the place would have changed a lot. But I see it remains the same so it’s very nostalgic.