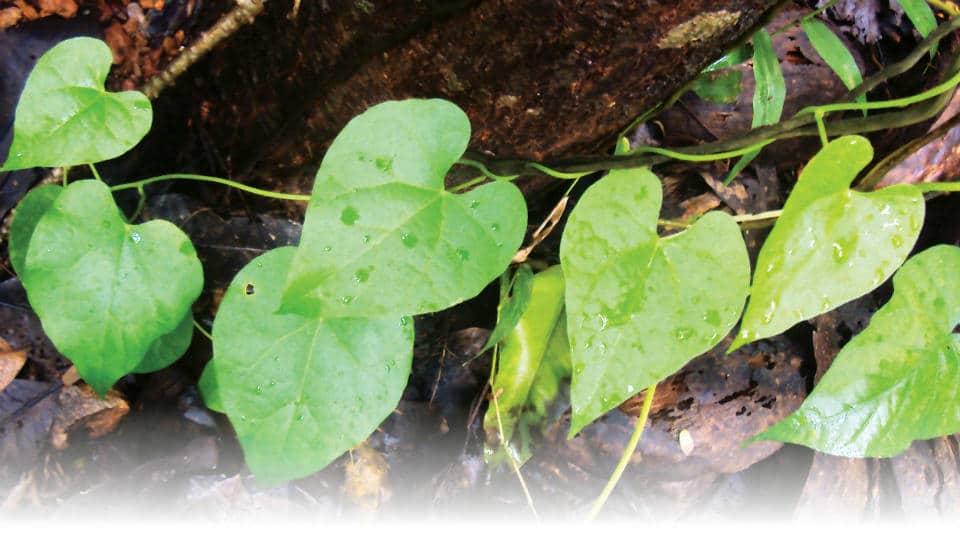 India is endowed with innumerable medicinal plants. Among these, ‘Amrutha balli’ tops the list being the most used premier medicinal herb. It is a miraculous ancient herb with amazing medicinal values and health benefits. The name ‘Amrita,’ which literally translates to ‘the root of immortality’ or ‘nectar’ lends its name to the plant. Native to India, it is considered to be a divine herb used in Indian medicine for ages. The climber plant is more familiar in Ayurveda as “Guduchi” or “Giloy” & several drugs are manufactured by Indian ayurvedic companies under different brands, the latest being the BGR-34, a premier Ayurvedic drug by CSIR (Government of India) for treatment of diabetes, also contains  ‘Giloy’ ! The climber growing   over walls, hedges and trees is a familiar sight in Mysuru city and found in most of the backyards of the houses.

It  is a common climber of dry and deciduous forests distributed throughout the tropical region of India besides Myanmar and Sri Lanka. It is a large climbing shrub with elongated twining branches spreading extensively. A special feature is the presence of  wiry aerial roots arising from the branches. Stems are  rather succulent, creamy white to grey, deeply cleft, papery bark and rosette-like pores (lenticels). Leaves simple heart shaped, very thin with long leaf stalks bulged at the base and apex and  arranged alternately. Inflorescence, called racemes are both  axillary and terminal; flowers tiny, greenish yellow, unisexual with male and female flowers on separate plants; stamens 6; female flowers with staminodes and carpels (3). Fruits  are called drupelets (1-3); ovoid  and scarlet coloured when ripe. The plant flowers during the summer and fruits during the winter.

READ ALSO  Fat is good if you want corrective surgery

Medicinal uses: ‘Amrutha’ is an anti-aging herb. According to a legend, the herb is an “heavenly elixir” and kept the angels eternally young. Even before the  advent of modern medicines, the herb has a long history of being used in traditional system of medicines and by ayurveda practitioners in India to treat numerous disorders or diseases. An assortment of bioactive compounds such as alkaloids, diterpenoid lactones, steroids, glycosides, aliphatic compounds, polysaccharides have been isolated from the plant parts and their action studied. The active principles are found to be antioxidant, anti microbial, anti toxic, anti diabetic, anti cancer, anti stress, anti inflammatory, anti allergic, liver protective properties etc., and therefore used for treating several diseases.

Many ayurvedic products are marketed under different brand names. The main products are: 1. Giloy Juice or Giloy Ras; 2. Giloy Satva or Seenthikodi  Sakkarai: Prepared  by grinding the giloy stem in water and the residue that settles down is collected and cleaned again and again. The final product is dried to a fine white powder; 3. Giloy Powder or Churna: Either buy from the market or prepare by sun drying fresh stems  till crunchy and grinding to a fine powder by sieving – grinding – sieving repeatedly; 4. Giloy Tablets: Patanjali Giloy Ghan Vati is popular; 5. Giloy Syrup: a combination of herbs are used (tulsi, amla and neem).