Home » Feature Articles » Kodagu Disaster: Too much and Too little 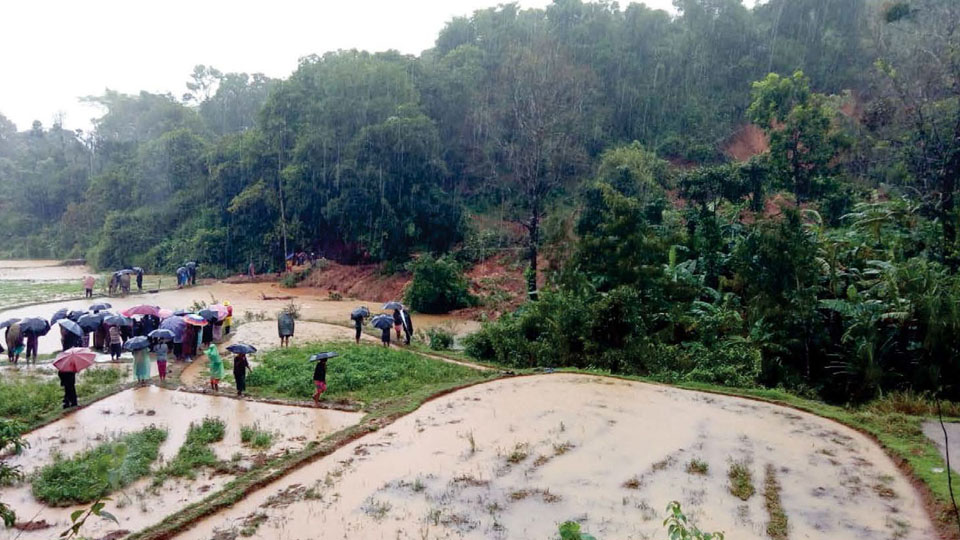 Kodagu Disaster: Too much and Too little

We need rain for drinking water and for survival. But there are also people who fear rain, especially heavy or continuous ones, like many who live in Kodagu and elsewhere in the Western Ghats. This year, in anticipation of heavy rain which could disrupt normal life, Government of Karnataka (GoK) wisely issued instructions to limit tourism in Kodagu and planned disaster relief measures.

GoK’s fears proved true since August 2019 appears to be a replay of August 2018 when Kodagu received extremely heavy and disastrous rainfall. This year’s rainfall has already caused severe damage and losses which are yet to be assessed.

In 2018, following disastrous loss of life and property and serious disruption of communications in Kodagu, the Mysuru Local Centre of The Institution of Engineers – India (IEI) suo moto convened a Technical Team which visited the ecologically-sensitive Western Ghats region.

The Team assessed damages and causes of landslips and recommended measures to restore road communications. But more importantly, it also recommended proactive steps to be taken to prevent or minimise similar widespread damage in the future. The report recommended that apart from relief, rehabilitation and reconstruction, (GoK) should take the following urgent proactive measures:

1.  Strictly prevent and punish deforestation and tree-felling in the name of development.

2. Begin urgent afforestation of endemic species of saplings on all deforested slopes.

3. Halt all infrastructure projects which threaten the ecology.

4. Curb any sort of mining and prevent polluting industries.

5. No permission must be given to convert public lands to private ownership.

The report stated that the cause for large-scale destruction in Kodagu was a combination of man-made causes and extremely heavy rainfall attributable to global warming.

It identified the primary cause as deforestation due to human incursions for road construction, power transmission lines, stone quarrying, sand mining, ground water extraction, change of land use from forest to agriculture or human settlements, tourism, etc. Thus, deforestation has occurred gradually and incrementally, as well as on large-scale for government-planned infrastructure projects, over decades.

It is very sad that the people of Kodagu have had to undergo the pain and losses of the on-going rain-caused disaster. Media reports that the administration in Kodagu is making Herculean efforts of rescue, relief and rehabilitation. Although these measures are absolutely necessary, they are merely reactive. GoK has taken no proactive measures on the lines recommended by the IEI Team in 2018.

To be fair, GoK is not alone in this, since all State Governments and the Union Government remain focussed on highway widening and new projects, all of them involve change of land use and deforestation.

Removing tree cover causes heavy rainwater run-off resulting in floods, topsoil loss and landslips with loss of life and property. It also prevents ground water recharge at higher elevations as in Kodagu, and consequently even perennial rivers like Cauvery have little flow in the dry season. Thus rivers are dying, and people are experiencing water shortage.

Forested lands are ‘storehouses’ of water and deforestation causes floods. Extreme rainfall due to global warming-driven climate change only intensifies both flood disasters and water shortage which are primarily due to deforestation. But Governments are only reactive to such situations and have no plans for the future apart from gearing up for disaster management, or suggesting interlinking dying rivers, while people and Governments fight over increasingly scarce water.

Governments are yet to understand that this kind of “development” is ecologically unsustainable and that environmental degradation affects PEOPLE. Effective proactive measures can only come from a holistic understanding of Nature and acceptance that human societies depend upon Nature for survival.

As deforestation slowly kills Mother Cauvery, 2020 may well be a repeat of 2018 and 2019. Let us listen to Mother Cauvery’s children in Kodagu who are opposing deforestation, and prevail upon GoK to take proactive measures suggested above.