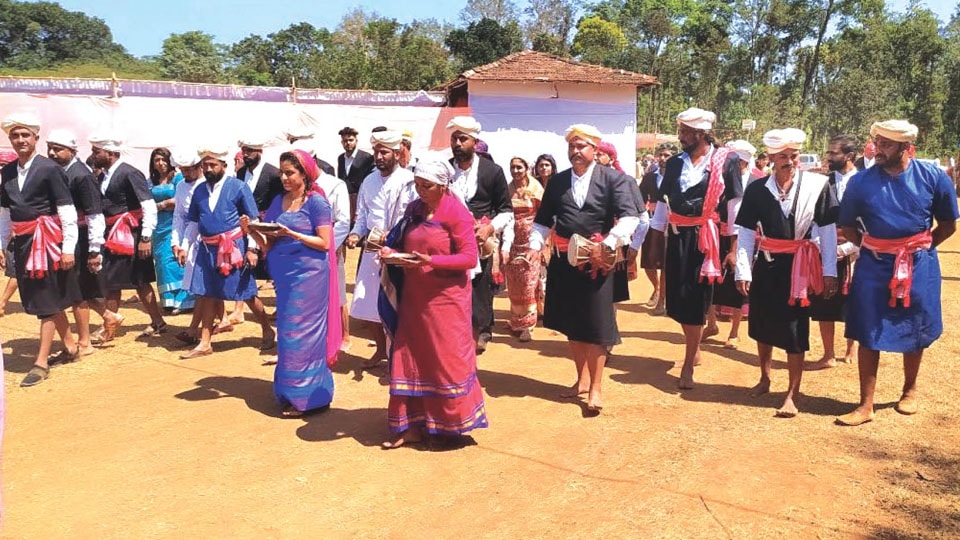 Gonikoppal: A two-day Kodava Cultural and Learning Festival, Koyime, began yesterday at Appachakavi Vidyalaya premises in Chikkamunduru village of Ponnampet taluk. The event is being organised by Connecting Kodavas Trust.

The festival has been organised to bring together talents of Kodava community who have achieved a name in culture, tradition and art forms, literature and sports. It is also a platform for budding talents from the community. Both elders and youngsters participated in the event.

Participants rekindled the cultural glory through attractive dance and other folk display. Kodavas give major importance to their tradition and cultures. This comprises of dress, language, customs, festivals,  songs, dance etc. The culture followed by the community is unique and the two-day festival reflected that aspect.

Fight for constitutional rights: President of Codava National Council (CNC) Nandineravanda U. Nachappa addressed the gathering and demanded constitutional measures to safeguard Kodava language, culture and traditions. He regretted that there has been a systemic destruction of Kodava culture and folklore.

“It is regrettable that Kodava community members are forced to launch a constitutional struggle to protect their cultural and social identity and have to raise their voice against the very Government that is supposed to safeguard a unique culture from diminishing,” he said.

He called upon the crowd to not only highlight infrastructure issues like roads and drainages whenever a Minister or an MLA visits a particular area but also make a point to convey to them that Kodava culture has to be preserved from extinction. “They must be compelled to formulate policies and programmes to save such special communities by granting constitutionally-enshrined rights,” he added.

United Kodava Organisation (UKO) Convener Kokkalemada Manju Chinnappa also spoke on the occasion and said that it is inevitable for Kodavas to unite and put up a united front and fight for their rights.

He called upon the community members in villages to continue the tradition of ‘Kodava Thakkame’. ‘Thakkame’ (the right to speak for) is the traditional, hereditary role of elders for a region or a shrine assigned to an okka (family). ‘Thakkas’ (headmen) were responsible for resolving disputes at different levels.