Home » Columns » Krishna is Vokkaliga, but he’s a Kannadiga first 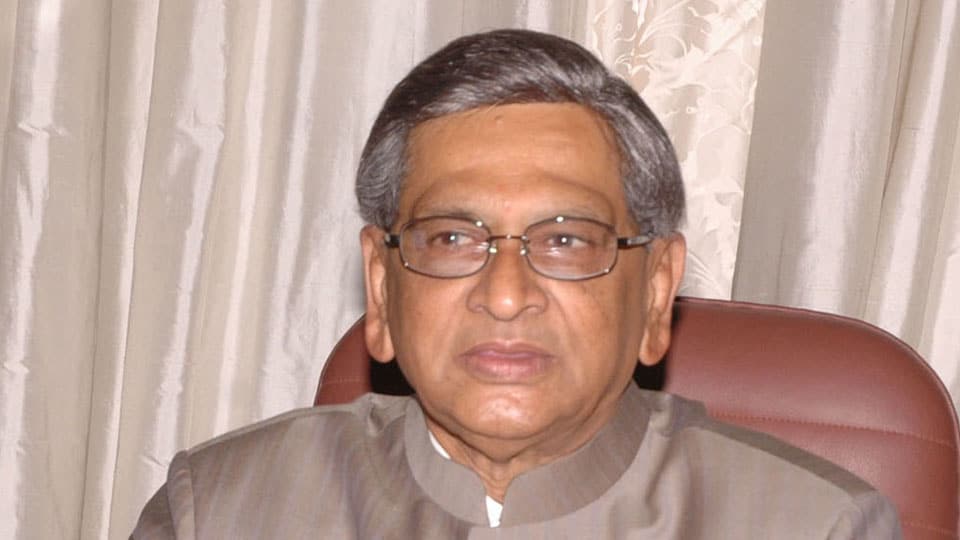 Krishna is Vokkaliga, but he’s a Kannadiga first

Two days ago, Karnataka Government announced that former Chief Minister S.M. Krishna would inaugurate this year’s Dasara festival. Immediately, but not surprisingly, it was seen as a political decision.

People in political circles said that Krishna was chosen because he was from the Vokkaliga community, implying that the BJP chose him to appease this particular community which is dominant in South Karnataka with the hope of winning their votes as they are traditionally  NON-BJP voters.

Such deductions are only natural to be made considering elections are coming soon and Vokkaliga votes matter.

More so, because the party that garners most of this community’s votes, the JD(S) doesn’t have a good track record when it comes to keeping its promise with its coalition partners. Hence, both BJP and Congress want the Vokkaliga votes so they don’t have to deal with JD(S) later.

If there has been a Chief Minister in recent memory who went beyond his caste or community in Karnataka, it is S.M. Krishna.

It can be said S.M Krishna’s disinterest in “community appeasement politics,” especially his own Vokkaliga community, allowed other Vokkaliga politicians to claim and become exclusive Vokkaliga leaders and representatives of Vokkaliga interest.

Of course, Krishna also had another drawback when it came to his mass appeal — he was too urbane, too “English” to connect with rural voters. He was mocked as “Oxford Krishna” for his English ways. Most famously his sartorial choice of suits and his love for the game of tennis.

That said, he was, and still is, more approachable than any of the “Sons of the Soil” politicians. Also, this attitude of Krishna worked well for Karnataka at a time when global companies wanted to sit across the table to do business.

In 2016, Krishna’s blue-eyed boy D.K. Shivakumar, speaking at an event in Mysuru, mentioned how Krishna was very particular about building infrastructure to attract business and would often say he wanted to make Bengaluru such that the “world leaders should first come to Bengaluru and then go to Delhi.”

To a certain extent that vision did come true because during Krishna’s time some of the world’s most celebrated business leaders and politicians visited Bengaluru — from China’s Premier Zhu Rongji to Britain’s Prime Minister Tony Blair; from General Electric Chairman Jack Welch to Intel CEO Craig Barett; from media mogul Rupert Murdoch to the Prime Minister of Japan, Yoshiro Mori, a first visit by a Japanese Prime Minister to India in 10 years!

They all came, saw and invested in Karnataka, thanks to a CM who sold Karnataka well to investors.

If not for Krishna, the then aggressive CM of our neighbouring State Andhra Pradesh, Chandrababu Naidu, would have hijacked many IT companies to his State, like KCR and Jagan of Telangana and Andhra are doing now.

Krishna, unlike other CMs, worked for everyone in Karnataka. He may have been perceived as an urban leader and industry-focussed but it was during his time that Jala Samvardhane Yojane, a programme to revive and restore deteriorated tanks in rural areas, was launched successfully. It was Krishna, who for the first time set up an Emergency Revolving Fund to procure crops in case of a price crash.

Since we’re speaking about “community appeasement” here is another example of Krishna’s nonchalant attitude to it.

For 12 years now there has been a project to build a Vivekananda Memorial & Cultural Youth Centre in Mysuru but it has not come to fruition despite a Court order. A similar situation arose back when Krishna was the CM.

In 2000, the Belagavi branch of Ramakrishna Ashram requested the State Government to grant land in Belagavi to build a memorial at a house Swami Vivekananda had stayed in during his visit to the city in 1892. The then Chief Secretary had turned down the request as that land belonged to the Government Guest House. When Krishna heard of the request he issued an order transferring the land to the Ashram. The memorial was completed a year later in 2001.

In Mysuru, even after 12 years, even after a Court order, our Government is unwilling to do so. Both Congress and BJP have failed to uphold the Court order and are fearlessly in Contempt of Court for the sake of votes.

While speaking of Krishna’s contribution to Karnataka, one has to mention that it was he who, after noticing the financial catastrophe Karnataka was heading towards, introduced the  Karnataka Fiscal Responsibility Act 2002.

This Act made our State Government responsible for financial stability and sustainability, by setting and achieving annual and long-term targets for revenues and reduction of fiscal deficit.

This law imposed limits on borrowings and demanded the State Government “to take appropriate measures to eliminate revenue deficit and contain the fiscal deficit to 3 percent of Gross State Domestic Produce (GSDP).”

Unfortunately, during Siddharamaiah’s tenure, he broke this law and took a huge loan, nearly Rs. 39,000 crore! But it was nothing compared to BJP which amended the Act to borrow more. And what was the borrowing? Rs. 90,000 crore! They justified it saying it was needed to manage the financial crisis created by loss of revenues and lack of GST during COVID.

While Krishna brought structure to finance, he also wanted to plug revenue leaks and the biggest one then was liquor sales. So he created the ‘Karnataka State Beverages Corporation Ltd.’

This Corporation began plugging leaks in excise revenue by managing distribution and ending the sale of ‘seconds’ liquor. This not only brought in more money for the State exchequer but also delivered the much-needed death blow to the then powerful liquor lobby.

Krishna had many firsts — he formed the Bangalore Agenda Task Force to manage the city; he demarcated areas in North and South Karnataka to move industries so Bengaluru would not get clogged; he gave life to the land records digitalisation project — BHOOMI — that was lying inactive for 13 years! Today, the Urban Property Ownership Records (UPOR) is an extension of this project.

“Sthree Shakthi,” the women’s self-help groups and the game-changing mid-day meal scheme, which is now a national one, were born during his time. So also the Metro.

So a man who has done so much for Karnataka is not just a Vokkaliga leader, he is beyond it. We are sure our new CM is not so ignorant as to reduce S.M. Krishna to a mere Vokkaliga mascot. We are sure Krishna was invited in appreciation for his services to Karnataka and its people.

Also while people want to say that BJP chose him for his Vokkaliga credentials we are sure Krishna is not a “vote-getting” Vokkaliga. He never was.

S.M. Krishna may be mocked as “Oxford Krishna” for his “English ways,” but like the English, he did much more for the people of Karnataka than leaders who claim to be sons of the soil.

So it’s only appropriate that a cultured politician inaugurates the biggest cultural event in a cultural city like Mysuru.