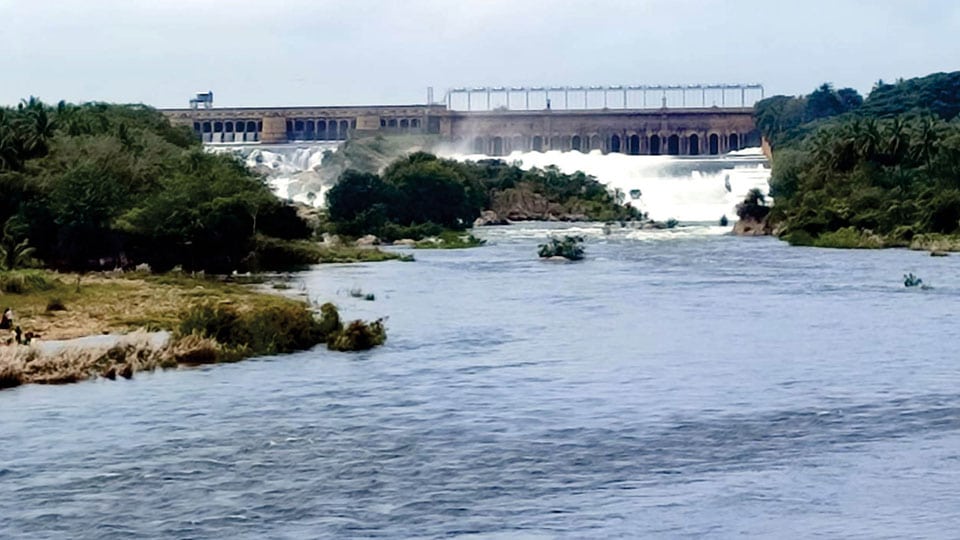 Srirangapatna/H.D. Kote: Continuous rains since over a week in catchment areas is causing heavy inflow of water to Krishna Raja Sagar (KRS) Reservoir in Srirangapatna taluk of Mandya district and also to Kabini Reservoir in H.D. Kote.

Today morning, KRS Reservoir recorded an inflow of 18,678 cusecs and an equal amount of 18,469 cusecs water was released from the Dam in order to maintain the maximum level of 124.80 ft.

It may be mentioned, KRS Reservoir reached its maximum capacity of 124.80 ft on Oct. 29 and has remained full for 21 days.

With rains still pouring, officials at KRS are anticipating more inflow to the dam and over 20,000 cusecs of water may be released from the reservoir, according to sources.

Flood alert has already been issued and people residing on the banks of Cauvery River have been asked to move to safer places along with their livestock.

Boating stopped at Ranganathittu: Following thousands of cusecs of water being released from KRS Dam, the water level of Cauvery River at Ranganathittu Bird Sanctuary near Srirangapatna has increased and as a precautionary step, the Forest Department has temporarily suspended the boating service. Officials said that the release of 20,000 cusecs from the reservoir will not impact the roosting birds at the Bird Sanctuary.

No entry to Nimishamba Temple

The management of Nimishamba Temple, one of the popular temples for pilgrims located on the banks of Cauvery River at Ganjam in Srirangapatna, has barred the entry of devotees to the temple as a precautionary step.

Barricades have been erected to prevent devotees and public from venturing near the river.

Following continuous rains, Kabini Dam is receiving heavy inflow of water and huge amount of water is being released to canals and river. This reservoir too remains at its maximum level of 2,284.00.ft. since Oct. 31.

Following the release of water, the bund of the Right Bank Canal of Kabini Dam has caved in at the 23rd km stretch.

However, the authorities said that there was no reason to panic and the outflow from the Dam is being regulated.

The Kabini Right Bank Canal is 202-km-long and has the capacity to carry 2,300 cusecs of water. This canal provides water to 1,10,000 acre area in H.D. Kote, Nanjangud and T. Narasipur in Mysuru district and also to Kollegal, Hanur and Yalandur taluks in Chamarajanagar district.

Following both the reservoirs reaching their maximum capacities, Chief Minister Basavaraj Bommai had offered bagina to both the Dams on Nov. 2.