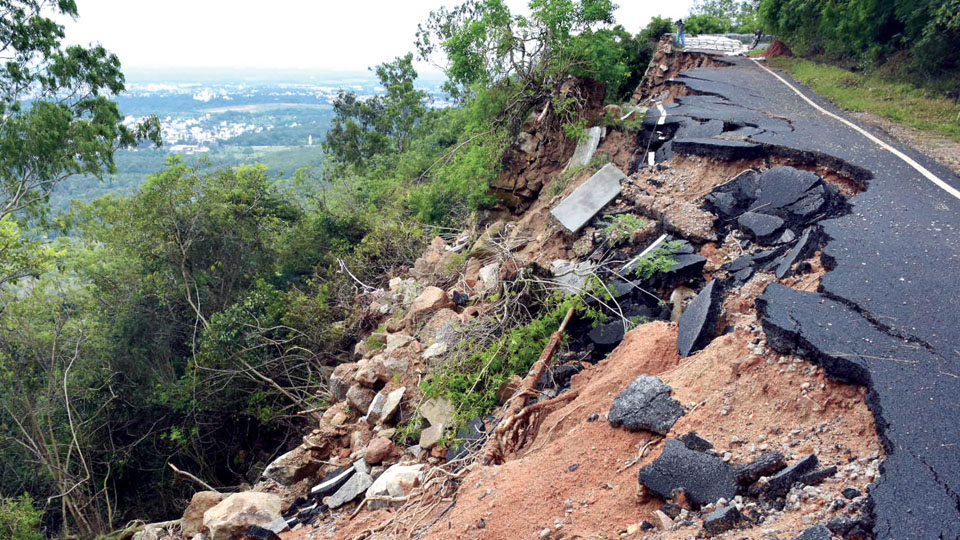 Landslides yet again atop Chamundi Hill

Mysore/Mysuru: One more landslide atop the Chamundi Hill yesterday morning near the Nandi Statue, metres around the earlier three landslides, has become a reason for worry to the District Administration as it has to take up a massive scale works to restore the roads and the hillock to its original shape.

The fourth landslide caused yesterday has resulted in a huge crater with the old retaining wall crashing, forming a deep muddy slope. If the same intensity of rain continues, the damage will be more and it would be impossible even to walk on the road that is fully closed for traffic now.

If repair works are not taken up soon after the rains recede, there is a danger of this part of the road being permanently lost. The earlier three landslides had caused damage to three stretches and the latest landslip is alarmingly wide due to constant water seepage and loose soil where the concrete road has collapsed, unable to withstand the pressure of the retaining wall.

According to Public Works Department (PWD) officials, the main cause for the land to slide is continuous water seepage that has resulted from incessant rain that is lashing Mysuru since the last one month or so. Many new water outlets have formed atop the Hill that are in addition to the existing water outlets.

Regular flow of large water from all the outlets to the foot of the Hill has made the soil weak and is unable to withstand pressure. This results in abrupt falls with downward movements of rock or earth, or both, that detach from steep slopes or cliffs.

READ ALSO  People rush for essentials at nearby shops despite drizzle

Scientists from Indian Institute of Science (IISc.) in Bengaluru have already studied the landslide pattern, visited the Hill twice and also collected the rock samples. They are studying the samples in their laboratories to prepare a comprehensive restoration project that will also give ideas to prevent future landslides.

The IISc. team has studied geological discontinuities such as faults, joints, bedding surfaces, or the contact between rock and soil that are contributing factors to the landslide. Scientists will come up with geo-trailing technology where future landslides would be prevented by building retaining walls after securing the slopes with a geo-mesh.

According to PWD officials, this technology will prevent mud from sliding despite any amount of water flowing from the top. Even the roads will not be damaged with this technology, they claimed.

Reacting on the repair and restoration works, Mysuru Deputy Commissioner (DC) Dr. Bagadi Gautham told Star of Mysore that the District Administration was awaiting the scientific study report being prepared by the IISc. “It is not advisable to carry out repair works at this stage where it is raining continuously and damages might occur while carrying out the restoration. The rains must stop for the retaining wall to be built as per the suggestion of the scientists,” he added.