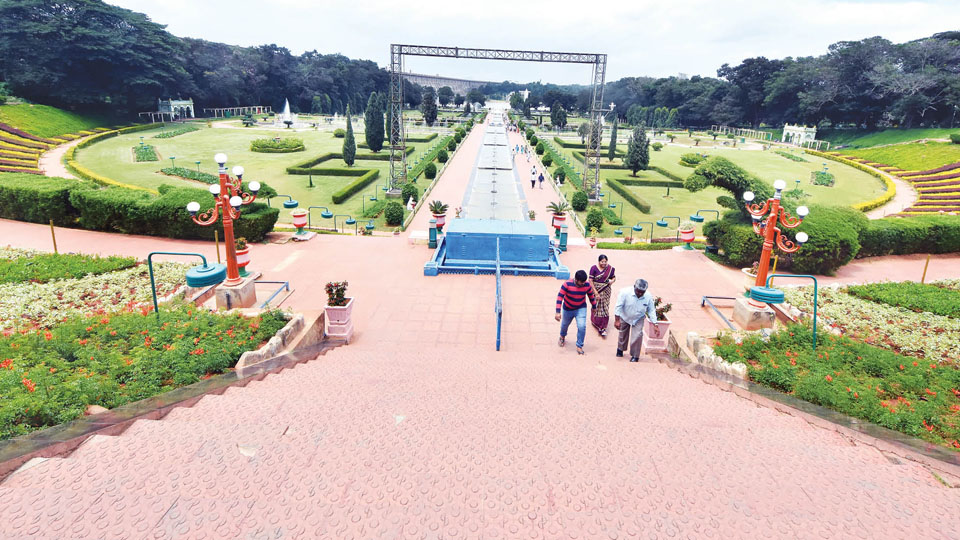 Mysuru: The annual earnings of Brindavan Gardens at Krishna Raja Sagar Dam (KRS) that stood around Rs. 6.20 crore to Rs. 7 crore is set to touch Rs. 13 crore next year as ticket collection has been privatised and handed over to a Bengaluru-based contractor.

The Cauvery Neeravari Nigam Limited (CNNL) that manages the KRS Dam has handed over the responsibility of collecting tickets to Iqbal Siddique from KCIC, Bengaluru, for one year. The tender was recently floated and the contract was awarded to Iqbal, said officials from CNNL.

As per the tender norms, the contractor has to pay Rs. 1.05 crore to CNNL per month and officials said that during the tender handing over process, Rs. 2.10 crore (two month fee) has been collected from the contractor. The contractor will have authority over KRS toll fee, parking and entry tickets to Brindavan Gardens.

According to the CNNL, now the entry fee has been hiked to Rs. 50 for adults, Rs. 10 for children and Rs. 5 for school students. Vehicle parking charges have also been increased to Rs. 50, and for heavy tourist vehicles, it is Rs. 100. The tender amount of Rs. 1.05 crore per month has been fixed considering the revised rates, officials said.

The contractor has started collecting the revised entry fee from Oct. 25. Officials said that handing over the toll collection responsibility to private parties has eased the burden of the CNNL that had to depute its own staff for the purpose.

The annual footfall to the KRS Dam and the Brindavan Gardens has shown a steady increase over the years. On an average, over 10,000 tourists visit KRS every day and the numbers see an increase during Dasara and peak tourism season. Taking the statistics of the last five years, over 30 to 35 lakh tourists have visited on an average every year.

Apart from rare varieties of plants and flowers, the fountains are another major attraction, especially in the evenings when water flows amidst colourful lights and music. These include Radhakrishna and Shiva waterfalls, high-pressure fountain, Kaveramma, umbrella fountain, crown, rainbow, inverted basket, arch, pyramid, mist and cross. The Dam’s peaceful atmosphere, breathtaking views and the beautiful Mughal Gardens are attracting tourists from far and wide who want to spend some quality time.