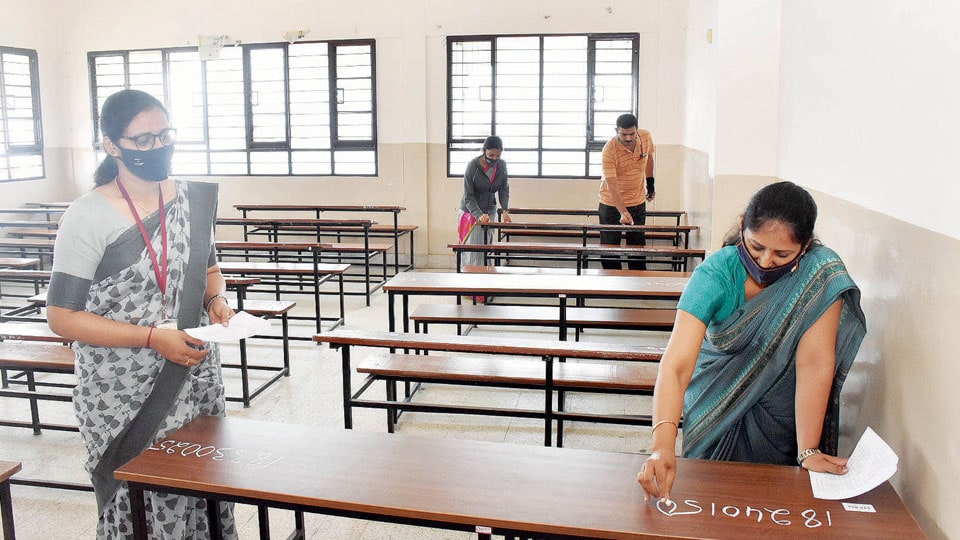 Mysore/Mysuru: In a last-minute decision affecting thousands of candidates, the University of Mysore (UoM) has postponed Karnataka State Eligibility Test (KSET) for the Assistant Professorship scheduled to be held across the State tomorrow (Apr. 11) due to the spread of COVID-19 and the ongoing strike by KSRTC staff. UoM is the Nodal Agency to conduct KSET at 11 Centres in State.

In a press release, the University KSET Coordinator Prof. H. Rajashekar has stated that the exams scheduled for Apr. 11 had been postponed. The fresh dates will be announced as per the directions of the State Government. The press release further said that all candidates who had registered for KSET-2021 must keep a watch on KSET website (http://kset.uni-mysore.ac.in) for any further updates.

Nearly, a lakh candidates have applied for KSET. The exams were supposed to be held for 41 subjects at 11 centres across the State including Mysuru, Bengaluru, Belagavi, Ballari, Vijayapura, Dharwad, Davanagere, Kalaburagi, Mangaluru, Shivamogga and Tumakuru. It may be mentioned here that last year too, the exams were postponed due to the COVID contagion.

As the examinations were scheduled for tomorrow, students were preparing to travel to various centres. Candidates who had applied for KSET were anxious in the wake of KSRTC strike and also the spread of COVID-19.  However, the KSET Centre at UoM had re-confirmed that the exam will take place tomorrow as scheduled, no matter the on-going KSRTC strike. Now the University has made a U-Turn and postponed the exam.

KSET determines the eligibility for Assistant Professorship in various Universities, Colleges and other institutions of higher learning (Government/aided/unaided). In the wake of the on-going KSRTC strike, there was opposition from some quarters for the conduct of exam tomorrow, citing that many candidates would be severely inconvenienced to attend the exam due to the strike.

Also many applicants had demanded the University postpone the examination in view of the KSRTC employees’ strike and disruption of bus services. However, the University authorities till this morning, were assertive that the exam would go ahead as per schedule tomorrow no matter the bus strike as all necessary preparations, including dispatch of question papers to all the 11 centres and marking of registration numbers of candidates in exam halls at all venues had been completed.