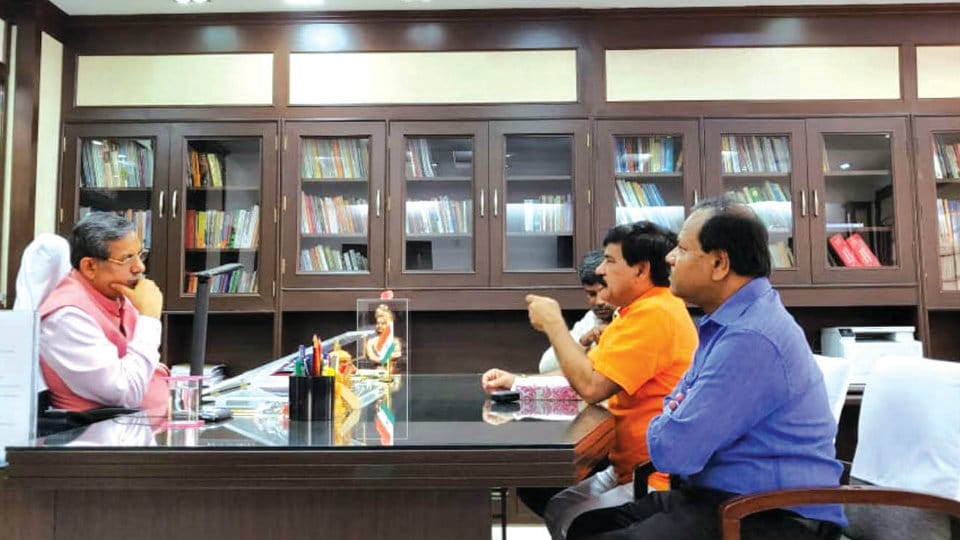 Mysuru: In a bid to get recognition to courses offered by Karnataka State Open University (KSOU), K.R. Constituency MLA S.A. Ramdas along with KSOU Vice-Chancellor Prof. D. Shivalingaiah met UGC Chairman Prof.D.P. Singh at New Delhi yesterday and held discussions with him. The UGC Chairman was also provided necessary documents on the clarifications sought by the UGC for granting recognition to KSOU.

The UGC in its Board Meeting on Aug. 2, 2018 had approved UGC recognition for KSOU and the proceedings of the meeting in this regard was submitted to the Union Minister for Human Resource Development (HRD) Prakash Javadekar for his approval. The Union Minister, after giving his nod, directed the UGC authorities concerned to implement the order granting recognition and also to allow KSOU to start making admission for its courses from this academic year itself.

The MLA and the KSOU Vice-Chancellor thanked Union Minister Prakash Javadekar and UGC Chairman Prof. D.P. Singh for responding positively to KSOU’s repeated pleas seeking recognition, on behalf of all KSOU students, staff and members of the public, who had fought for the same for over three years.

They also thanked Union Minister representing the State H.N. Ananth Kumar and State BJP President B.S. Yeddyurappa for their efforts in getting back recognition for KSOU, according to a release from MLA Ramdas.

MLA S.A. Ramdas
Historical plaque at Rly. Hospital restored after protests
One more letter to HDK from Siddu; this time on Film City