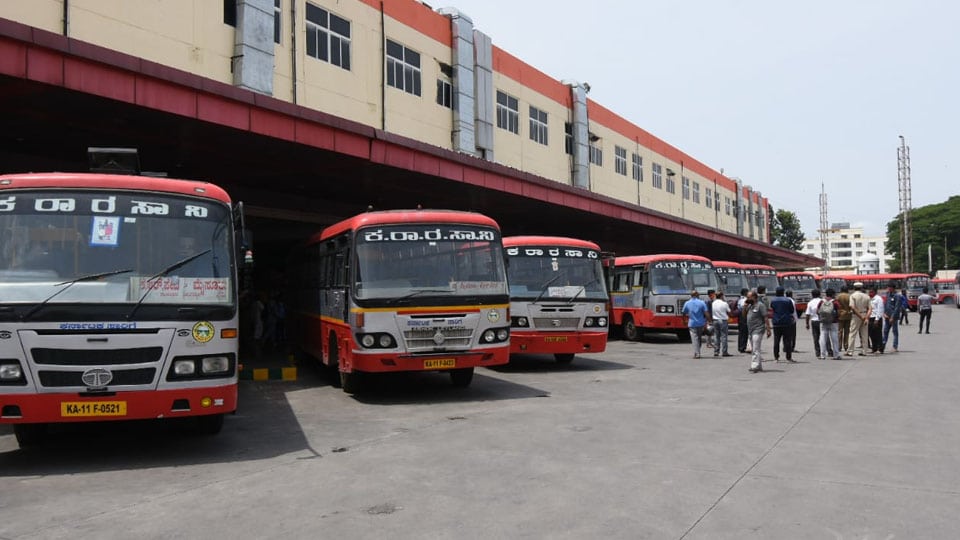 Mysuru: With the AITUC-affiliated KSRTC Staff and Workers Federation and other KSRTC Unions  giving a one-day Statewide strike call tomorrow (Jan. 24) seeking fulfilment of their 14-point charter of demands, the KSRTC authorities and Workers Unions have maintained that the strike will have little impact on operation of KSRTC buses tomorrow.

The demands include salary revision, reduction in work hours, improvement of work conditions for all workers, especially women staff, withdrawal of FIRs filed against employees and reinstatement of dismissed employees, among others.

Sources said that the strike will be limited to a protest at Freedom Park in Bengaluru and in front of all KSRTC Divisional Centres across the State, with only a handful of staff and workers from all the four Transport Corporations — KSRTC, BMTC, NWKRTC and KKRTC — taking part in this protest. The sources also said there are about half a dozen Worker Unions, which are lacking in unity and as such, the strike has lost its sheen  in Mysuru.

Pointing out that KSRTC officials of Mysuru have spoken to office-bearers of the Unions, when they assured that they will not disrupt operation of buses but stage only a symbolic protest in front of KSRTC Mysuru Divisional Office at Bannimantap, the sources said that only about 60 staff will stage a protest and as such, the strike will have little impact, with other staff expected to report for work.

KSRTC Mysuru Rural Divisional Controller (DC) R. Ashok Kumar told Star of Mysore this morning that the officials have spoken to office-bearers of KSRTC Unions, who have promised that they would not disrupt operation  of buses.

Continuing, Ashok Kumar said that there are 10,072 buses coming under Mysuru Division, which are operating on 968 routes and just over 10,000 trips. The Mysuru division has a staff strength of 4,700  out of whom, hardly about 100 to 120   staff may stage a protest, he said adding that the strike will have no or little impact in the city tomorrow.

Meanwhile, KSRTC Chairman M. Chandrappa, the MLA from Holalkere,  who was in the city this morning, said that the Government was committed to addressing the just demands of KSRTC workers and staff.

Pointing out that the CM has assured to convene a meeting of KSRTC officials and Labour Unions to resolve issues, he said that he (Chandrappa) has asked the Unions to call off their strike and come to the table for talks, to which most of the workers have agreed.

Recalling that the Transport Corporations paid wages to the staff even during the COVID pandemic, when the Corporations suffered huge losses due to a halt in operations, he said that the staff must remember this and withdraw the strike call in their own interests.