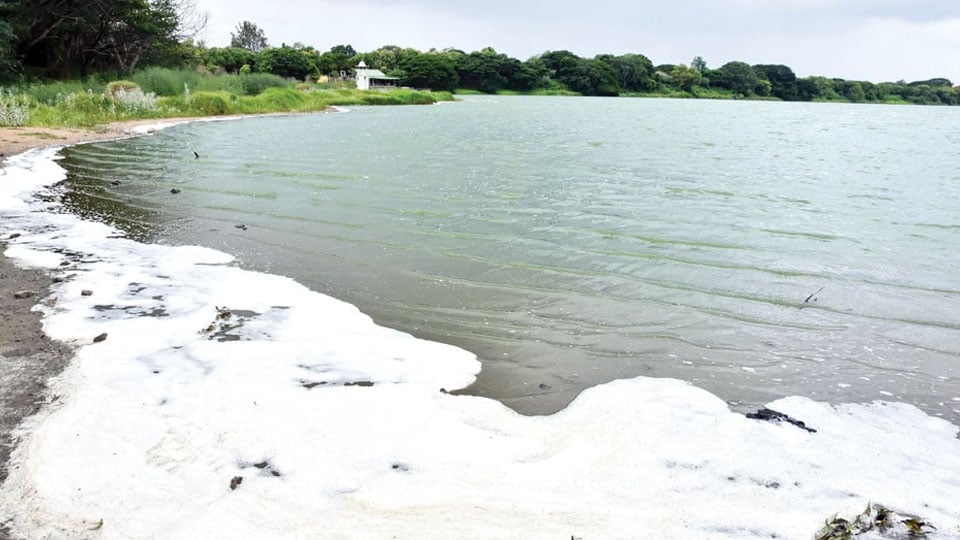 Mysuru: Gallons of sewage water mostly containing faecal matter and detergent water is entering on a daily basis into the iconic Kukkarahalli Lake in the heart of the city. This sullage is threatening the very existence of the Lake and is the prime reason for the Lake to spew froth, revealed a study conducted by the Karnataka State Pollution Control Board (KSPCB).

On July 11, Star of Mysore had published a detailed report on the froth-emitting Kukkarahalli Lake like the infamous Bellandur Lake in Bengaluru that regularly spews waves of froth and thick foam. The froth at Kukkarahalli Lake was seen at the borders of the Lake washing ashore.

Following the shocking development, Deputy Commissioner Abhiram G. Sankar, who himself is a naturalist and an avid bird watcher, had directed the Pollution Control Board to collect samples and send them for tests. Accordingly, officials visited various corners of the Lake and collected samples.

Speaking to Star of Mysore this morning, KSPCB officials said that the report has been submitted to the DC on Wednesday, July 24 and the DC was holding a meeting of water experts, technical engineers and environmentalists at the Lake premises today at 4 pm to discuss the ways and means to save the dying lake.

This causes a frothy layer on the waters and when wind blows, froth is formed, the report has concluded, underlying an urgent need to identify the source of sewage water and stop its further flow.

Environmentalists had earlier suspected that sewage water is flowing from surrounding areas through the magic box on the on the Hunsur Road. The magic box was constructed last year for the rainwater to flow smoothly into the Lake through gravitational force. Instead, it is carrying sewage and filth.