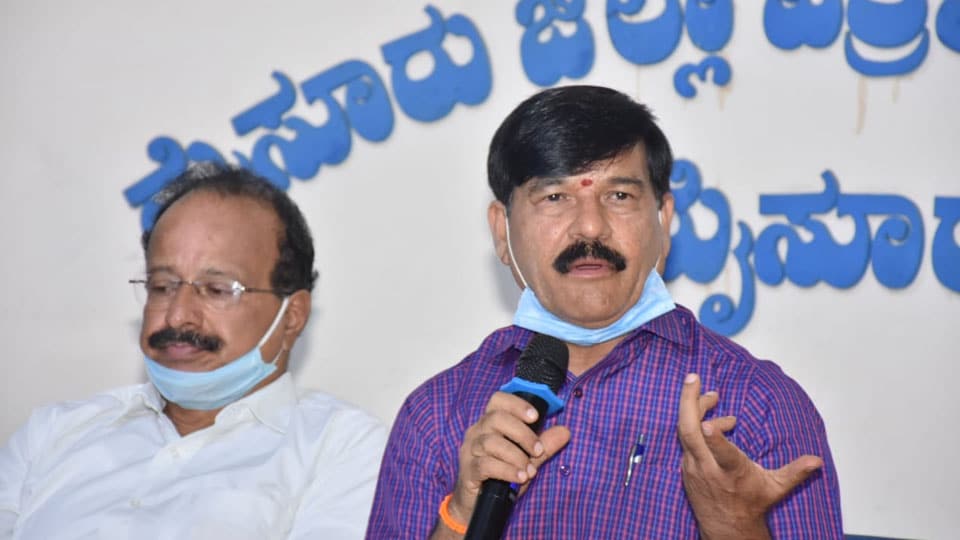 Mysore/Mysuru: The State Government’s efforts to end the Kurubarahalli Survey No.4 land row that has been lingering for over five years is set to see a logical end in the coming days and over 25,000 property owners of Siddhartha Layout, Alanahalli, J.C. Nagar, K.C. Layout and Income Tax Layout will be relieved as their properties will be removed from ‘B-Kharab’ (Government land) classification.

“The declassification of CITB (City Improvement Trust Board) and MUDA (Mysuru Urban Development Authority) Layouts coming under Kurubarahalli Survey No. 4 and Alanahalli Survey No. 41 from B-Kharab is likely to happen by the end of this month and the official announcement will be made in Mysuru by District Minister S.T. Somashekar and Revenue Minister R. Ashoka. All hurdles for the vexed land issue have been cleared and even there is no case pending in the Court of Law,” said Krishnaraja MLA S.A. Ramdas under whose Constituency these lands fall.

Addressing a press conference at Pathrakarthara Bhavan this morning along with President of Kurubarahalli Survey Number 4 Kshemabhivruddhi Sangha and BJP National Council Member B.P. Manjunath, Ramdas said that as all the hurdles have been cleared, Chief Minister B.S. Yediyurappa has directed the Mysuru District Minister and Revenue Minister to settle the issue once for all and save the residents from further trouble.

As a result of people’s struggle, the Chief Minister’s Office (H.D. Kumaraswamy) vide its letter No. CM/52430/REP-4EM/2018 dated Sept. 17, 2018, had directed the MUDA Commissioner to take further action in respect of the previous Siddharamaiah Government’s Cabinet decision in this regard. “Though Congress Government headed by Siddharamaiah had also passed a Cabinet resolution to drop the B-Kharab classification, there were some legal hurdles,” Ramdas said.

On 30.1.2020, Principal Secretary of the Revenue Department wrote to the Mysuru Deputy Commissioner (DC) seeking details of pending litigations in Courts disputing the B-Kharab classification. “The letter was written with an intention to end the long-standing row. Replying to the letter and after ascertaining facts and examining documents, Mysuru Deputy Commissioner Abhiram G. Sankar, based on a report by Tahsildar, wrote back on 6.3.2020 that no case is pending with respect to the Layouts in the High Court of Karnataka,” the MLA said, releasing documents as a proof to his statements.

Ramdas continued and said though the Cabinets headed by Siddharamaiah and Kumaraswamy passed orders to remove B-Kharab classification, there were no follow-ups done at the official level. “After the BJP Government came to power, I, along with the residents, took active interest and relentlessly followed up the issue with the State Advocate General and the Revenue Department Principal Secretary and now, the long-pending problem has gained traction and is seeing a logical end,” Ramdas said.

The Mysuru District Administration, in May 2015, had classified the land coming under the said Survey numbers as ‘B-Kharab’, following which the MUDA and the MCC stopped issuing land records such as Khatha transfer, building plan approval, CR etc., of sites and other landed properties in CITB (now MUDA)  developed Layouts.

These lands were taken over by CITB 70 years back to form Layouts without removing these lands from the ‘B-Kharab’ classification. Now the Government should rectify the records by taking needed decisions. This inaction of the authorities has caused a lot of hardship to residents and property owners in these Layouts as they cannot do any property transactions.

This official apathy and negligence has made over 25,000 property owners in  these MUDA Layouts suffer mentally and financially for the last five years as the B-Kharab classification refrains them from doing any kind of property transactions, be it selling sites, construction of houses or getting bank loans, etc.

Corporators Roopa and Chayadevi and former Corporator Prasanna were present with MLA Ramdas at the press conference.