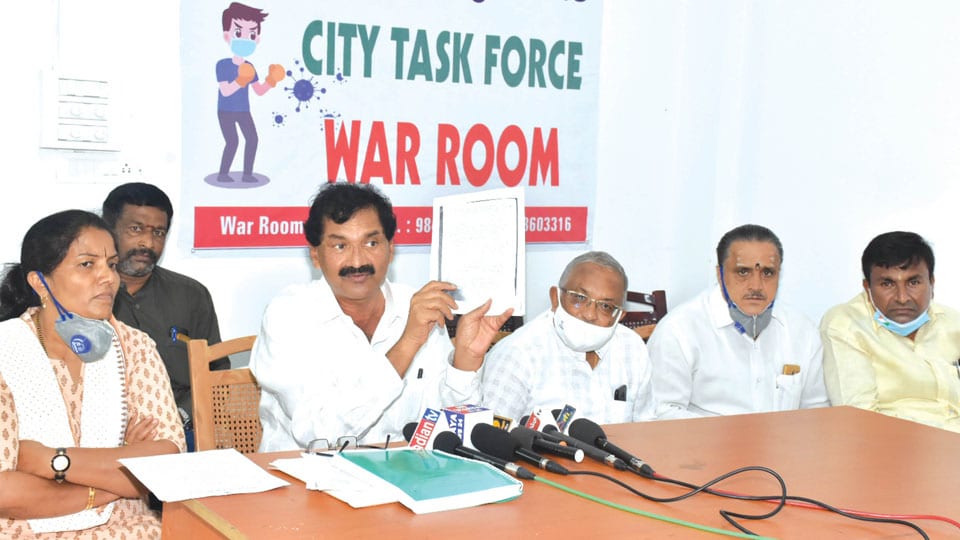 Mysore/Mysuru: Days after former Krishnaraja MLA M.K. Somashekar claiming that what the Revenue Minister R. Ashoka had recently presented was only a ‘Government Letter’ and not an official ‘Government Order’ to Mysuru Deputy Commissioner regarding the Kurubarahalli Survey No.4 and Alanahalli Survey No.41 issue, KPCC Spokesperson M. Lakshman again raked up the same issue and claimed that nothing had moved in this regard and the BJP leaders were lying to the people.

Revenue Minister R. Ashoka had recently presented a Government order to Mysuru Deputy Commissioner Abhiram G. Sankar on leaving out 354.29½ acres of land coming under Kurubarahalli Survey No.4 and Alanahalli Survey No.41, on which land the MUDA (formerly CITB) has formed Siddartha Nagar, J.C. Nagar and K.C. Nagar, from B-Kharab classification (Government land).

Addressing a press meet at Congress Office in city yesterday, Lakshman accused Revenue Minister R. Ashoka and sitting MLA S.A. Ramdas and other BJP leaders of misleading the public by presenting only a ‘Government Letter’ and not a ‘Government Order’(GO) regarding leaving out the said land from B-Kharab classification.

In May 2015, the land coming under the said survey numbers were classified as ‘B-Kharab’ following which the MUDA and the MCC stopped issuing land records such as Khata transfer, building plan approval, CR etc., of sites and other landed properties in CITB (now MUDA)                                developed Layouts.

The State Cabinet headed by the then Chief Minister Siddharamaiah on March 3, 2018, had decided to leave out a total of 354.29½ acres (including 205.091/2 acres of Siddarthanagar, 105 acres of KC Layout and 44.20 acres of JC Nagar Layout) coming under the two survey numbers, from ‘B-Kharab’ classification.

“After a change in the Government, the Chief Minister’s Office (CMO), during the rule of H.D. Kumaraswamy, vide its letter No. CM/52430/REP-4EM/2018 dated Sept. 17, 2018, directed the MUDA Commissioner to take further action in respect of the previous Siddharamaiah Government’s Cabinet decision on leaving out the lands from ‘B-Kharab’ classification. After this, nothing has moved so far. The BJP leaders are fooling people,” Lakshman alleged.

“It is only a Government Letter (dated July 14, 2020) written by the Under Secretary (C. Balaram) of the Revenue Department (Land Allocation-1), stating that a total of 354.29½ acres of land coming under Kurubarahalli Survey No.4 and Alanahalli Survey No.41 has been left out from B-Kharab classification and the Urban Development Department should take further action in this regard. How can this letter be considered a Government Order,” Lakshman questioned.

“The Congress party will initiate genuine efforts to free the lands from B-Kharab classification as we intend to provide justice to the already aggrieved people,” he said and added that the party will stand with residents.