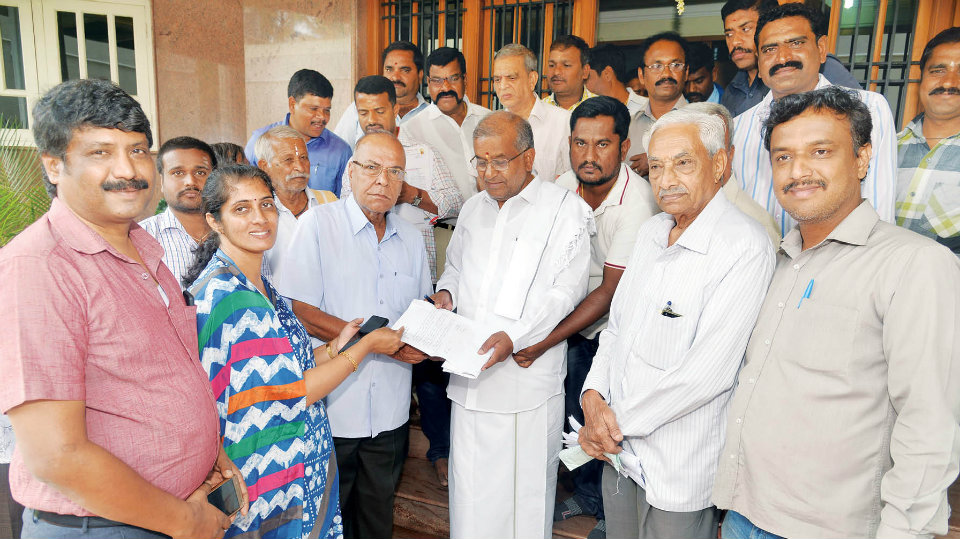 Mysuru: A section of property owners and residents of City Improvement Trust Board (CITB) now Mysuru Urban Development Authority (MUDA) Layouts coming under Kurubarahalli Survey No. 4 and Alanahalli Survey No. 41, who have been relentlessly fighting to get the land out of ‘B-Kharab’ (Government land) classification, met Mysuru District Minister G.T. Devegowda (GTD) this morning seeking his intervention in ending the stalemate.

The residents told the Minister that there was inordinate delay in implementing the March 3, 2018 State Cabinet decision to delete CITB and MUDA Layouts from ‘B-Kharab’ classification. The State Cabinet headed by the then Chief Minister Siddharamaiah on March 3, 2018, had decided to leave out a total of 354.291/2 acres (including 205.091/2 acres of Siddarthanagar, 105 acres of KC Layout and 44.20 acres of JC Nagar Layout) coming under the two survey numbers, from ‘B-Kharab’ classification.

The Cabinet also decided to hand over the land to MUDA after ‘B-Kharab’ deletion. Although nine months have passed since the Cabinet decision, officials have not shown any interest on implementing the Cabinet decision that will benefit nearly 25,000 people living in these Layouts, the aggrieved residents told the Minister.

The lands had been purchased by people from MUDA in 1970s. However, they are yet to get land records, in spite of them being legal owners of the land. Hence, everything had come to a standstill as they are neither able to sell their houses nor build extra floors for the past three years, the residents apprised the District Minister.

They told GTD that State Advocate General and the Revenue Secretary must take steps to implement the Cabinet decision but nothing has moved so far. They requested GTD to intervene and issue suitable orders to MUDA and MCC to come to their rescue.

Giving a patient ear to the residents, GTD said that there were certain pending technical issues and there were over 15 cases pending before the High Court. “I will discuss this with the Advocate General and bring up before the Cabinet though the previous Cabinet has passed an order. You need not be apprehensive and the deadlock will be resolved soon,” he told the delegation.

“The Editor-in-Chief of Star of Mysore and Mysooru Mithra K.B. Ganapathy had given me a letter of requisition in this regard two weeks back and I had passed it on to Revenue Secretary Rajkumar Khatri with instructions to take the matter forward. I had also spoken to Advocate General in this regard,” GTD told the residents.