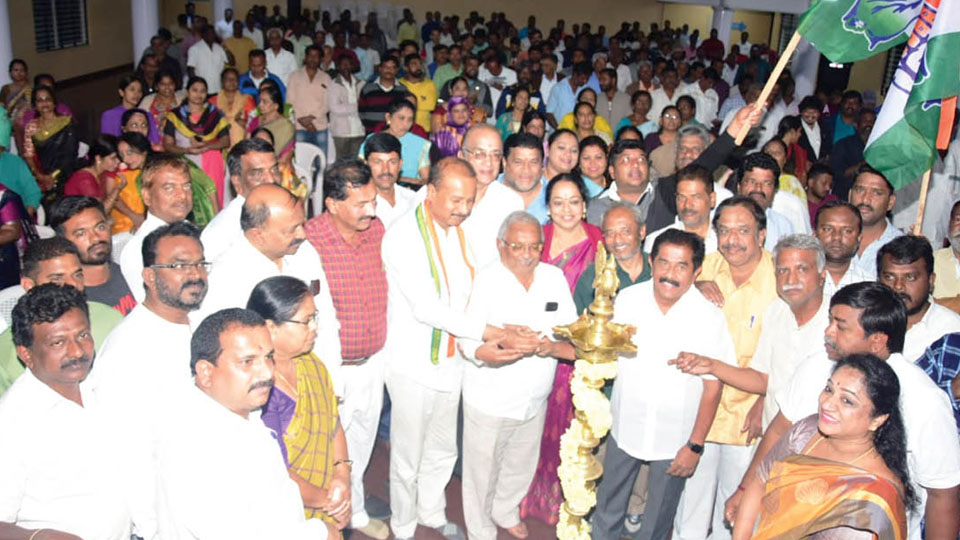 Mysore/Mysuru: KPCC Working President R. Dhruvanarayan said that despite launching several welfare and empowerment programmes for the poor and oppressed sections of the society, the Congress lost the last Assembly polls because of lack of discipline and poor organisation. He was addressing the KR Assembly constituency party workers called to discuss preparations for the party’s  ‘Prajadhwani Yatra’ rally in city on Jan. 26, at Chikkammaniketana Kalyana Mantapa in Kuvempunagar here yesterday.

Maintaining that the Congress gave everything for people’s welfare when it was in power, Dhruvanarayan observed that, however, the party failed in reaching out to the voters on Government schemes and programmes of the Siddharamaiah-led Congress Government, which resulted in the party’s defeat in the 2018 Assembly polls.

Asserting that the Congress is a truly secular and democratic party, the KPCC Working President said that the BJP was limited to just one religion as the party failed to give any ticket to Minority communities. Accusing the BJP of deleting unfavourable and minority voters from the electoral rolls, he said that the party workers must ensure the total success of the party rally to take place at J.K. Grounds tomorrow.

Continuing his tirade against the BJP Government, Dhruvanarayan alleged that the BJP was running a 40 percent Commission Government and many of its Ministers were involved in huge scams. The BJP has nothing to boast of its achievements and as such, it has planned to spend huge sums of money for winning the forthcoming Assembly polls, he said adding that the BJP was certain to taste defeat, despite its huge spending plans in the polls.