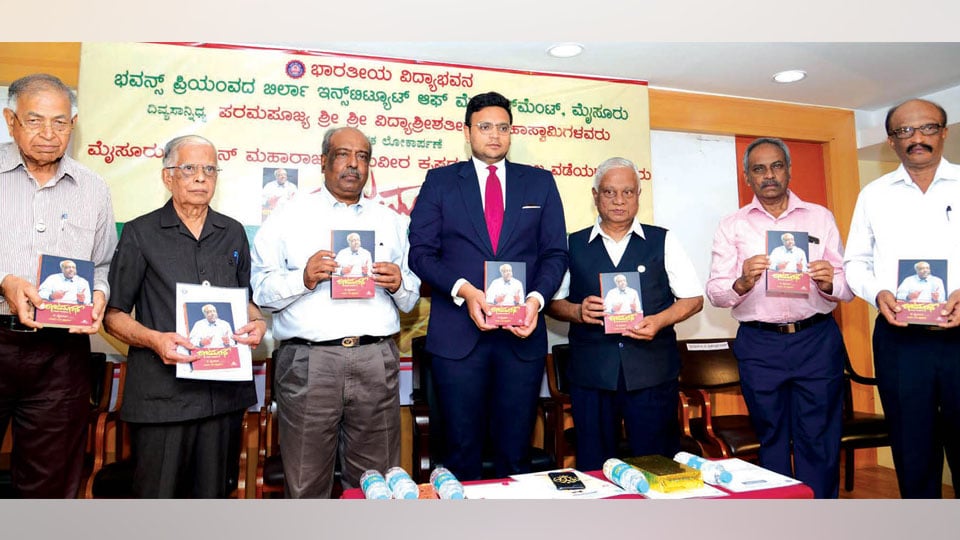 Learning from history is important for administrative reforms: Yaduveer

Mysuru: Observing that learning from history is important, member of the erstwhile Royal family Yaduveer Krishnadatta Chamaraja Wadiyar has maintained that taking the right decision in a critical situation is a part of good administration.

Expressing delight that he got a chance to take part in the programmes that take place in BVB, he asserted that history will certainly help in providing better governance and as such we should learn as much as possible from history.

BVB Mysuru Chairman Prof. A.V. Narasimhamurthy (AVN), who spoke about the book, said that most bureaucrats (IAS) lead a life of ‘I am safe.’ But the book author K. Jairaj does not belong to that category and he worked keeping the society’s interests in mind, Prof. AVN added.

Noting that Jairaj was successful in implementing Gujarat’s model of ‘Jyotigram Yojana’ in Karnataka after a thorough study when Narendra Modi was the Chief Minister of Gujarat, Prof. AVN said that it was B.S. Yeddyurappa, as the Chief Minister, who convinced Jairaj against quitting Government service, when the IAS officer had sought voluntary retirement due to some reasons.

BVB Bengaluru Chairman N. Ramanuja, who presided, recalled an incident when Jairaj saved him from a tricky situation when he (Ramanuja) was serving as HMT Managing Director.

Recalling the enormous contribution of Nalwadi Krishnaraja Wadiyar to the State, he said that the erstwhile royal family will ever be remembered for their visionary administration.

The book author K. Jairaj said that he has recorded his 35 years experience of administration as an IAS officer of the State.Earlier, a two-minute silence was observed as a mark of respect to martyred CRPF Jawans who were killed in a terror attack at Pulwarma in J&K on Feb.14.