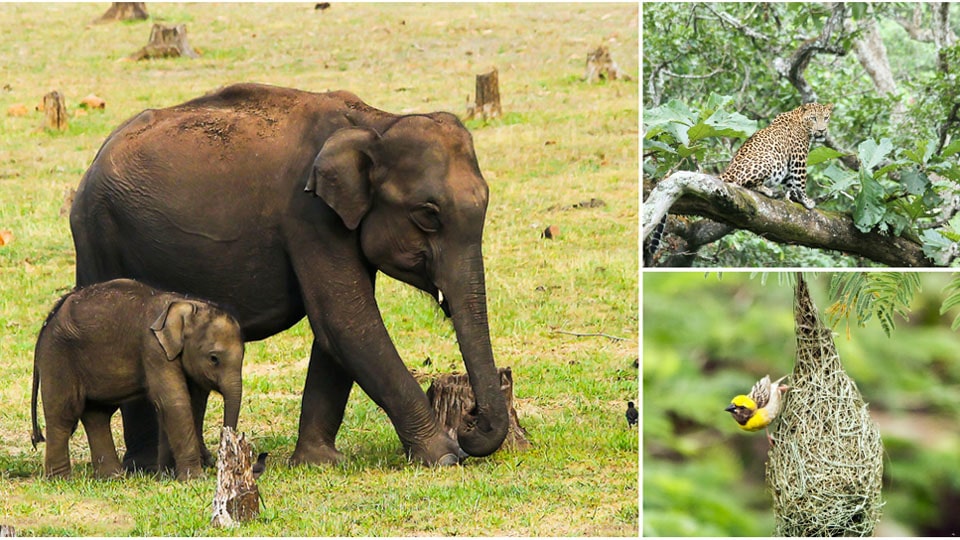 Lessons from the wild

Human beings may be considered the more evolved species on Earth but there is no denying that the animals who can’t talk are also quite intelligent and display rare traits while leading a solitary life or while living in groups. From the tiniest ant to the mighty elephant, animals of all kinds can teach us valuable life lessons.

One only needs to pay some attention to learn many important lessons that we may have forgotten in the haste of our normal daily lives. Whether it is teaching us how to survive in the harsh reality of the jungle to proving their loyalty, there’s a lot we, humans, can learn from animals, says avid wildlife photographer from Mysuru M.K. Mukesh.

These birds are called “Tittiba” in Kannada and they are found everywhere, from forests to our neighbourhoods. They are not as skilled as many other birds in building their nests. In fact, they don’t have an idea of building one at all.

Their breeding season is usually from February-March to July-August. During this period the soil is parched and they select a place near a pond or even where a pond existed during monsoon, to lay their eggs. Or a place where there is marble-sized pebbles around. They lay their eggs, usually 3-4, among these pebbles and this makes it difficult for predators to spot the eggs among these pebbles.

As the eggs are not totally safe like other birds’ eggs in their nests, parent birds keep themselves awake 24×7 to watch them over. They start giving out loud calls at the very sight of an intruder like a mongoose, a jackal or even a dog at any point of time forcing other animals to be alert. So, these birds are nick-named “policemen of the jungle.”

Whenever the parent birds spot any intrusion, they fly away from the eggs and start giving out loud calls and behave like they are trying to protect the eggs at that place. Hearing the calls, the intruder goes to that place to find eggs and not finding any, goes on its way. Hence, the eggs are safe here. This is one of their survival skills. After the eggs hatch, the chicks, by instinct, hide in a depression in the ground whenever the parents give loud calls in unison at the sight of an intruder. This is another skill of survival.

LESSON: Try to develop survival skills even under most vulnerable conditions.

They are the best-known natural weavers and are called ‘Geejaga’ in Kannada. As monsoon approaches, these specialist weavers become active in nest-building. This skill is not ordained on the females. It is only the males which are blessed with this skill. Both sexes look almost alike in non-breeding season, more or less resembling a female house sparrow. During the mating season, the males attain a yellow plumage on its head and breast regions, slightly extending up to its back.

Males start building nests alone using thick blades of grass or paddy strands. The nest contains a living chamber and the entrance is a vertical tube downwards. This architecture is to keep predators at bay. Half way through the construction, the male starts attracting passing females. The fertile females come and inspect the under-construction nest for safety and security of eggs and chicks. If the female is not satisfied with the nest, she simply rejects the offer and flies off.

If she is satisfied with the nest, the mating rituals take place. During the gestation period, the male finishes the nest. Only the females incubate the eggs but feeding the chicks is done by both parents.

Once the family starts, the female fetches a pinch of wet soil from a nearby paddy field and sticks it to the wall in the living chamber and then it brings a glow worm (Minchu hula in Kannada) and sticks it to the wet soil. The worm thus stuck, cannot fly away but keeps glowing all night. The family thus has a light for the night in their home.

LESSON:  When a small bird tests the skills of her would-be mate, a prospective bride should also do the same for her safety.

The bird’s bill (beak) is almost half the size of its rest of the body. This is one of the seven sub-species of hornbills found in India and is commonly found everywhere including our neighbourhood. These birds relish anything from fruits and berries to insects, invertebrates, worms, reptiles like lizards or small snakes or a frog and mice. They are almost arboreal but for a few occasions when they come down to floor to feed on fallen fruits, mice or scorpions.

These birds can live up to 25 years. When the birds attain adulthood, they select a mate which is for life. They always pair for life and remain loyal. Both male and female will not pair and mate with other ones even after the death of any one of them. Loyalty personified.

Once the female gets pregnant, they select a cavity in a tree as their home. As pregnancy advances, the female enters the cavity and shuts herself inside by covering the entrance with mud or droppings, ably assisted by the male. A small opening is left to feed. The female and the chicks usually numbering 1-4 remain inside until the chicks are able to fly. During this period, the male takes up the responsibility of feeding the female and the chicks. So they select a nesting place close to a fruiting tree. As the risks may be, if for any reason, the male dies during this period, the entire family faces death.

LESSON: Loyalty is the “Mantra” where divorces are so common amongst us.

These cute little dogs always stay in a pack ranging from 4-15 members. They are small in size — comparable to a 12-month-old country dog. Because of their small size and killing patterns, they can never survive in the wild alone.

These dogs lead a unique lifestyle. No two females will litter at the same time in a single pack. One more unique display in their lifestyle is that they practice babysitting. Whenever there is a litter, the mother, accompanied by another member, stays back in the den to take care of the pups while the other members embark on a hunt. These dogs have a sack in their throats. When the pack members return from a successful hunt with their sacks filled with fresh flesh, they pour it out to the baby-sitters and the pups to feed on.

When the pack members feel hungry, they start demanding for food by licking the mouth of the Alfa male repeatedly. Getting the information, the Alfa male sets off on a kill followed by the other members of the pack. Once the Alfa male locks the target and starts running towards the target in high speed, the other members follow the leader in a slower speed so as not to tire oneself. When the Alfa male gets tired, the second in line picks up speed and continues in full speed, then the third and so on. But during this chase, the prey cannot afford to lose speed and ultimately surrenders and succumbs. Because of this strategy, wild dogs are termed as most successful hunters.

LESSON: Their lifestyle and survival strategies — unity and discipline.

Elephants are highly social animals. They celebrate the birth of a calf and mourn the death of a member of the herd. They even greet their cousins or their counterparts affectionately with their trunks when they come across each other. They caress the pregnant in labour with their trunks and encourage her to be calm. Once she delivers, the herd members even help her clean the newborn. An adult elephant needs up to 170 kilos of fodder each day and 70 litres of water daily. This is why they need to feed up to 18 hours a day. During dry and hotter days, the moisture content in the vegetation is less and this forces the elephants to feed for more hours.

So, the herd migrates to greener pastures. The traditional migration route may be hundreds of years old for the herd and the knowledge of these routes are passed on to the next generation.

Their memory being extraordinary, elders lead the herd in the same route year after year. Other members of the herd simply follow the leader.

LESSON: Obedience and respect for elders which is becoming extinct in younger generation in humans.

They are the most adaptable and intelligent among the big cats. Leopards can thrive even in our neighbourhood without even giving us a clue of its presence. Their adaptation is such that they can survive on small birds or rodents in the absence of bigger preys.

They are always alert due to fear of bigger cats and even wild dogs. In case of a face-off with any of these, their ability to climb trees saves them from danger. They even take their heavy prey to tree tops to feed and protect it from tigers or wild dogs.

They have to first locate the prey, reach a safe and close distance from the prey without letting it know of its approach, stalk and strike at the right moment. All these take a lot of patience, precision and perseverance. Patience first, followed by the other two. The multiplying numbers of these cats goes to show that they are masters of all these skills.

LESSON: Learn to be patient before taking a decision. This can yield good results.