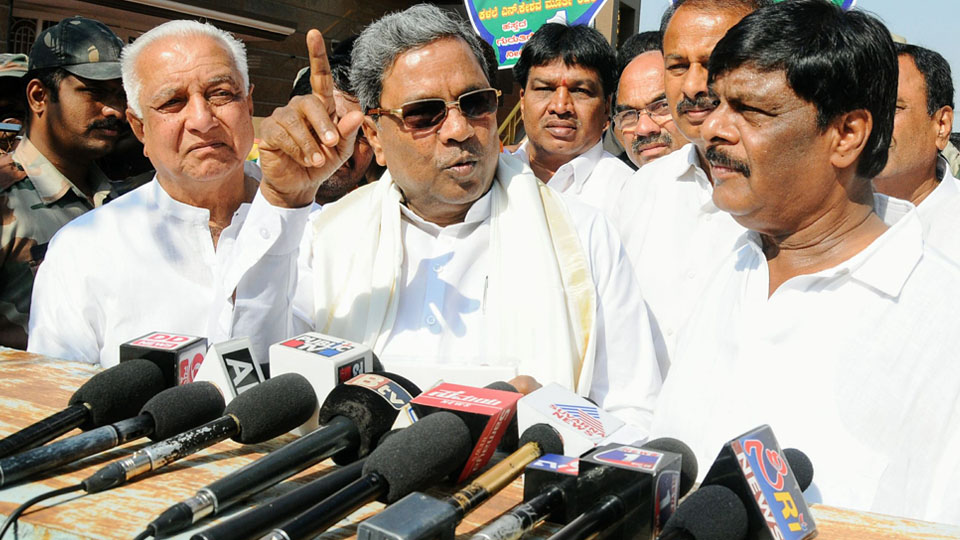 Mysuru:  Is there more than what meets the eye to the discontent brewing in Congress over Chief Minister Siddharamaiah contesting both from Chamundeshwari in Mysuru and Badami in Bagalkot District? If Siddharamaiah’s behaviour is taken into consideration, it looks like he is upset with the party High Command for not allowing him to contest from both the constituencies.

KPCC President Dr. G. Parameshwara and AICC General Secretary K.C. Venugopal met the CM last evening, at Hotel Southern Star (after Siddharamaiah finished his campaigning in Varuna) and held closed-door meeting with him regarding his contesting from two seats. Sources said that the CM, after the meeting, walked away in a huff without even looking at the reporters who were waiting to speak to him.

Today morning too, the CM got angry when reporters questioned him about yesterday’s parleys between him, Venugopal and Parameshwara. Siddharamaiah, who usually steps out of his house at 10 am to hit the campaign trail, did not come out of his house even at 11.30 am though party workers were waiting for him since early morning.

As soon as the CM came out of his house, media persons crowded him and posed questions. Siddharamaiah, who came out with a slight grin on his face, got angry when reporters questioned him on his contest from Badami and Chamundeshwari. “Congress High Command will decide on my contesting from Badami,” he said.

At this point, one reporter asked the CM, “You are the party High Command.” To this, Siddharamaiah replied, “I am not the High Command and I am just a Chief Minister.”

But not leaving at this, reporters again questioned about the confusion in party ticket distribution in Badami, the CM said “Don’t ask repeat questions.” When reporters persisted, an angry CM said, “We will solve all confusion and it is left to the party. It does not concern you” and boarded his SUV to leave for Varuna campaign.

Inside sources from the party told Star of Mysore that Siddharamaiah conveyed a clear message to the High Command that he must be allowed to contest from Badami and Chamundeshwari as there is a coalition of BJP and JD(S) to defeat him in Chamundeshwari.

Meeting KPCC Chief and AICC General Secretary yesterday, the CM told them that if denied two seats, he (CM) will not campaign for other party candidates in the State.

Yesterday, sitting Badami MLA B.B. Chimmanakatti too had to face Siddharamaiah’s anger. He had come to the hotel where Venugopal, Parameshwara and Siddharamaiah met.

An upset Siddharamaiah said, “Why have you come here too. If I am contesting from Badami, you will not get a ticket. This is clear. We will discuss the issue inside the hotel now.   Don’t wait here and come after half-an-hour.”

Saying this, the CM entered the room where the meeting was to take place and closed the door behind him. However, it is not clear if CM met Chimmanakatti after the meeting. Sources added that Parameshwara and Venugopal left for Bengaluru late in the night after meeting the CM.

5 COMMENTS ON THIS POST To “Let High Command decide, says an angry Siddharamaiah”