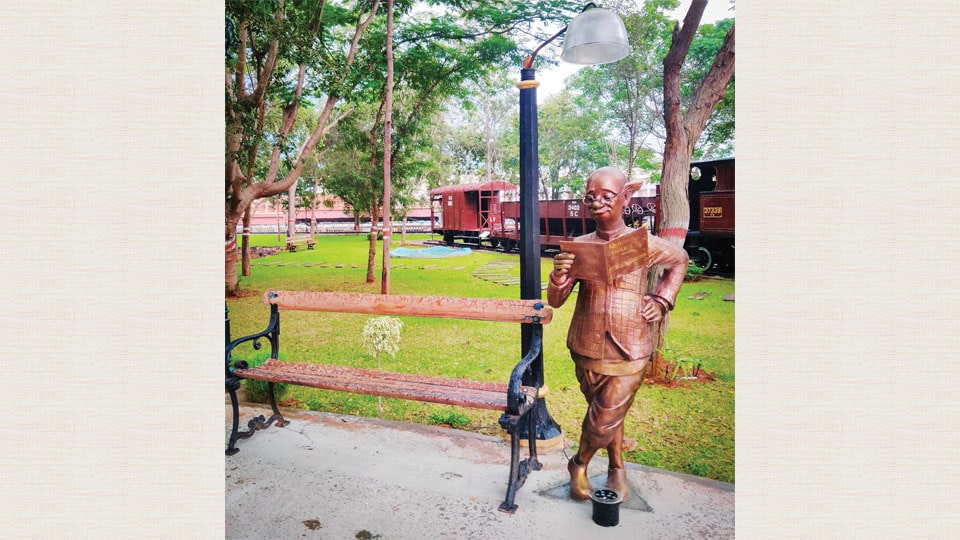 Mysore/Mysuru: A man with a checked coat and bemused expression is in the Mysuru Rail Museum these days.  He is none other than the much loved and closely followed cartoon character ‘Common Man’ created and immortalised by the illustrious cartoonist R.K. Laxman. The character is deeply etched in the minds of people of all ages.

South Western Railway (SWR), Mysuru Division, has installed a life-size sculpture of the celebrated cartoon character in the precincts of Rail Museum that was opened to visitors recently after renovation.

The legendary R.K. Laxman was born in Mysuru and graduated from the University of Mysore.  The character of ‘common man’ appeared for the first time in the year 1951. This also coincides with the journey of Railways in Independent India. This is a small tribute to the creative genius of the illustrator who hails from this cultural city, she said.

This statue was sculpted by city sculptor Arun Yogiraj, who has done complete justice to the creation, the DRM added.

It may be recalled, ‘Life Is A Journey’ statuary that adorns Mysuru City Railway Station portico was also created by Yogiraj as part of SWR, Mysuru Division’s redevelopment works. The statuary, which is a set of six sculptures, was modelled on actual Railway passengers.