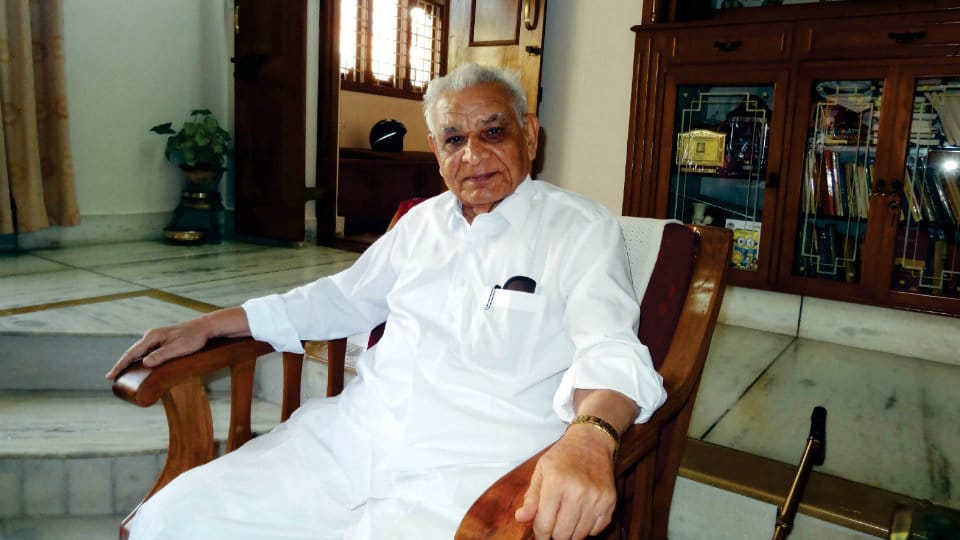 Life is worth only if it is lived for others

Hemchand Jain, an 83-year-old businessman in Mysuru, believes in living life by the above principle. In 1953, he migrated to Mysuru from Kalandi, a small village in Rajasthan. Inspired by the teachings at his village school, the seeds of service were already sprouting in the young heart when he made Mysuru his home to take over the family business but there wasn’t any opportunity to do much.

About two decades later, the big opportunity came unannounced in a small way when one day while sitting at his friend’s clinic, a leprosy patient walked in for consultation. His friend Dr. Raj Kumar Singh casually mentioned to his friend-cum-patient that he would love to serve leprosy patients if there was someone who could provide free medicines. Little did the Physician know that his wish would be granted instantly?

Hemchand Jain, a 40-year-old then, readily agreed to construct a dispensary and provide free medicines to leprosy patients. The duo worked together for sixteen years and the dispensary continued to function even after the demise of Dr. Singh. After being cured of the ‘curse,’ the leprosy patients were also helped to find employment and other means of livelihood. ‘The dispensary functioned for 35 years but when there were no more leprosy patients in the city, the clinic was closed,’ says the philanthropist while a smile of contentment plays on his lips.

I first heard the name of this philanthropist when I had visited Asha Kirana Hospital for an interview.

Many years ago when Asha Kirana was still a dream project and Dr. S.N. Mothi was looking for a place for giving consultation to HIV positive patients, Hemchand Jain volunteered to give the entire floor of Mahaveer Jain Hospital to Dr. Mothi and his team.

‘I just asked for one single room and we got the entire floor. We used the premises for seven years and not a single paisa was charged from us as rent,’ says Dr. Mothi.

And when it was time to construct the building of a 30-bed AIDS Hospital at Hebbal Industrial Area, this octogenarian contributed a large sum as one of the Trustees of Asha Kirana Charitable Trust.

Such magnanimity is indeed rare in today’s materialistic world when even while doing a charity we are chiefly concerned about how it benefits us. ‘What’s in it for ME?’ is our first thought. And here is an individual who expects nothing in return for the lakhs spent by him. May his tribe increase!

‘Why AIDS and Leprosy?’ I want to know. He adjusts his hearing aid before answering. ‘Even today there is a lot of stigma attached to these two diseases so there are not many people who work for leprosy and AIDS. There are still myths that leprosy is contagious and one can get AIDS just by shaking hands. Our society doesn’t need only the financial assistance but we should also create awareness about these diseases.’

It is refreshing to see such wisdom and progressive thinking in a person who has studied only till intermediate.

Life is fleeting, and permanence in this world is something we all strive for. Philanthropy is the best way to achieve permanence.

—Ram Shriram, a businessman from the US

‘We generated funds from family and friends to set up two schools as education is the best gift one can give to anyone,’ he mentions modestly with an unmistakable emphasis on ‘We.’ Mahaveer Vidya Mandir at Srirampura and Shree Mahaveer Jain Vidyalaya at Siddarthanagar are affiliated to State Board and ICSE respectively. ‘These schools don’t impart religious education. They are regular schools so don’t go by the  name,’ he clarifies.

When I ask him where else he has helped financially, he again smiles. ‘Nothing much…,’ he says. His elder daughter-in-law Padma Vasanth Jain at whose house we were chatting, steps in to complete the sentences of the patriarch of the family. ‘He is passionate about education and health. He has supported many students. On the death anniversary of my mother-in-law Kamala Devi Jain, he conducts health camps for poor people. Look, he has received so many awards,’ she says pointing towards an array of plaques in the showcase.

After the interview, as I switch on the music player in my car, an old Hindi song plays resonating with the mood, Apne liye jiye to kya jiye, Tu ji, ai dil, zamane ke liye  (what is life if you live only for yourself, live for others).