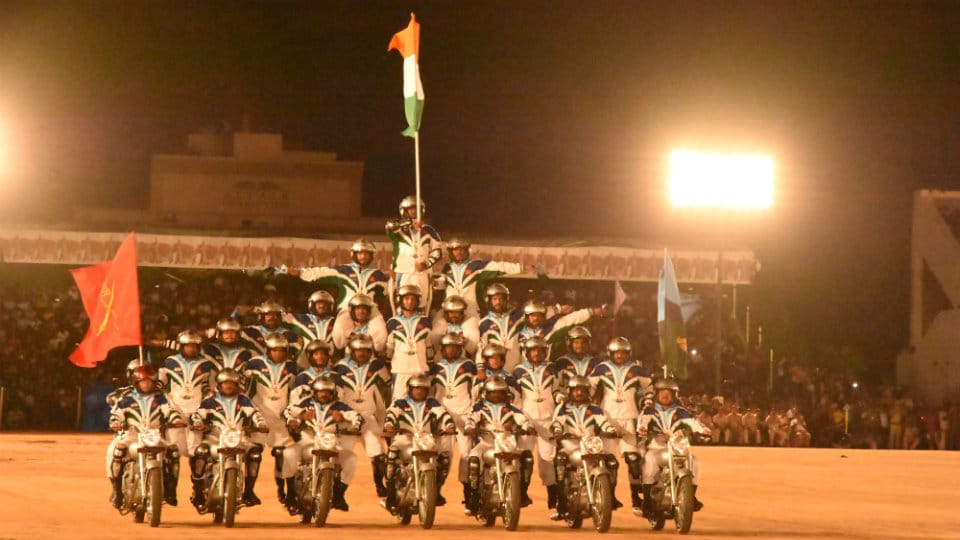 Governor Vajubhai Rudabhai Vala took the salute from the marching contingents of Police, Home Guards, Scouts and Guides, Mounted Police, District Armed Reserve (DAR) Police, Central Industrial Security Force (CISF), Police Band and NCC’s Army, Navy and Air Force Wings. 21 Gun Salute using the canons were given amidst rendering of the National Anthem. The crowd, filled to the capacity at the ground, was treated to a visual delight.

A 17-member Dare Devil team of the Indian Army led by Nishanth Kothari, comprising Nayak Sunil Kumar of Holenarasipur, Nayak Vishal of Belagavi and others, displayed a perfect co-ordination between man and machine.

They performed bike stunts on their Royal Enfield bikes by performing Opening Crossing in the beginning. They later performed Double Crossing, Parallel Crossing, Chain Crossing, and Scissor Crossing, which thrilled the spectators. The riders also rode the bikes without holding the handle, by seating on the rear seat,  on petrol tank, by sitting reverse, by standing on the seat, by climbing the ladder placed on the moving bike and by controlling the bike using the ladder which made the spectators stand on their feet.

Later, 10 members of the team formed Christmas Tree on a single bike besides performing Triple Salute and Commando Ride among others. The Army personnel numbering 340, formed pyramids on seven bikes and rode on the Torchlight Parade Grounds holding flags of the Nation, Army and their unit. They also made 15 people lie on the ground and jumped over them on their bikes and also jumped through fire rings. The enactment of the war between Lord Ram and Ravan was the special attraction.

Two Army personnel dressed as clowns not only entertained the young and the old at the Grounds but also performed various stunts which received applause from the spectators.

With lights in the grounds turned off, the burning torches provided a breath-taking view with 300 Police probationers from the Police Training School in Hassan staging a Torchlight Drill, which mesmerised the spectators.

The Police probationers bid goodbye to 2019 Dasara and invited the spectators by forming ‘See you in 2020.’

A ballet staged by the dancers of DNA Entertainment showcasing the culture and tradition received appreciation from all. The artistes, attired in multi-coloured garments, danced to the lilting music and Kannada lyrics. A 15 ft tall and 40 ft wide Palace made by the Police team was displayed on the occasion.

A scintillating laser show in the backdrop of music caught the attention of everyone at the Torchlight Parade Grounds.