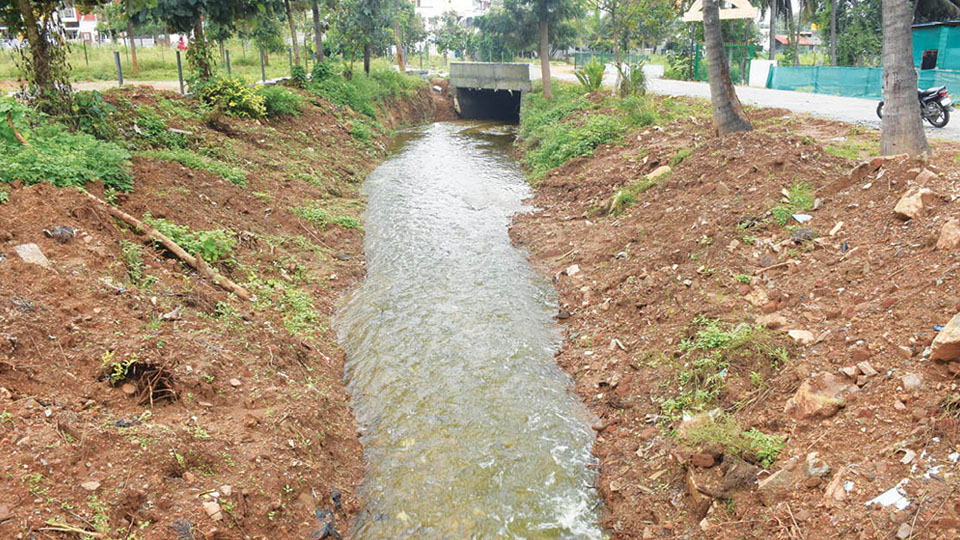 Mysore/Mysuru: Has the Mysuru Urban Development Authority (MUDA) protected the interests of encroachers, the powerful and the influential by digging up Lingambudhi Lake bund (Kodi) with earth-movers? Yes, say villagers of Lingambudhi Palya who are facing excessive flooding now. They have threatened to launch protests if the original condition of the Lake is not restored.

Last week, MUDA had dug up the Lake bund in its efforts to prevent flooding of areas in the backwaters of the Lake. Excess water from the Lake now flows through drainages to reach Dalvoy Lake.

However, the drainages that carry the Lake water are too small to accommodate such a large amount of water and the drainages are overflowing at several places threatening the residents who live in low-lying areas around the Lingambudhi Lake and Lingambudhi Palya.

The MUDA’s move has been criticised by environmentalists who alleged that MUDA has buckled under pressure from the influential and the powerful who have encroached vast swathes of land around the Lake. They have alleged that as water is continuously flowing out of the Lake, the fragile ecosystem is being damaged.

Addressing a press conference at Pathrakarthara Bhavan in the city yesterday, President of Karnataka Bhovi Development Board and a resident of Lingambudhi Palya G.V. Seetharam said that several political party leaders, builders and real estate lobbies have encroached the Lingambudhi Lake and as such, the size of the Lake has shrunk.

Due to rampant encroachment, water enters to the encroached areas and to prevent this, MUDA had dug up the Lake bund to drain excess water, he said. “While many have built houses, commercial establishments and other buildings in the encroached areas, several of them are waiting for the Lake to perish. They are now dictating MUDA to kill the Lake in one way or the other. There are more than 20 bigwigs involved in land-grabbing around the once vast Lake,” he alleged.

READ ALSO  Lingambudhi Lake to be developed as tourist spot

‘Aim is to kill the Lake’

“Encroachment is the main reason for flooding. Instead of clearing the squatters, MUDA has chosen to drain the water thereby killing plants, animals, fish and birds. Ultimately in summer, the Lake will go dry and this will facilitate more encroachments and this is their aim,” he charged. The Lake extended up to 220 acres earlier and now most of the area has been lost to encroachers, he noted. MUDA has its own rules and regulations to protect lakes and water bodies. Also there are many Supreme Court and High Court judgements that ask the civic authorities to conserve the lakes. “Here, all rules have been thrown out of the window and MUDA meekly surrendered to the will of the powerful. In doing so, MUDA has misguided the Forest Department,” he said.

The villagers of Lingambudhi Palya are committed to clear encroachments and if the MUDA does not restore the bund, a series of protests will be organised. “A comprehensive probe must be launched against the MUDA move to destroy the Lake and all encroachers must be evicted to increase the boundaries of the Lake,” he added. Seetharam said that he has written to the Governor, Chief Minister, Chief Secretary and Deputy Commissioner seeking action against erring officers. Lingambudhi Palya villagers Dasanna, Yathish and former Gram Panchayat member Bangarappa also spoke.

ONE COMMENT ON THIS POST To “Lingambudhi Lake bund dug up to drain excess water: MUDA acted under pressure from encroachers Villagers”