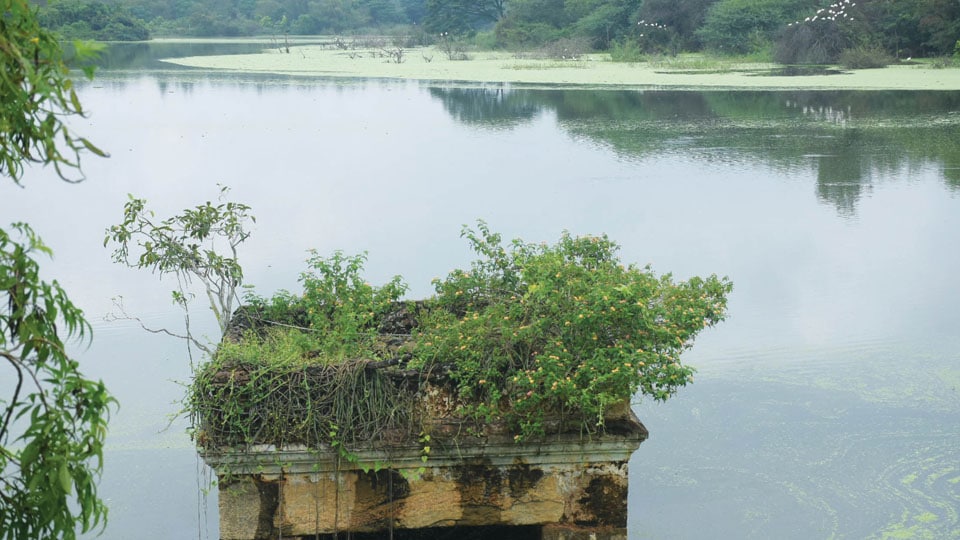 Mysore/Mysuru: To prevent water from the Lingambudhi Lake entering nearby layouts and properties owned by certain influential people, the Lake’s bund (Kodi) was dug up with earth-movers yesterday to let out excess water through the small drains.

While doing this, an area covered with thick green growth has been completely destroyed by earth- movers and also many saplings that were planted by the Forest Department to increase the green cover have been uprooted, destroying bird nests.

This unscientific move has angered the environmentalists and eco-activists who say that as the Lake bund has been intentionally breached, there will be no water left for the rich ecosystem of birds, animals, amphibians and underwater beings. They have alleged that Mysuru Urban Development Authority (MUDA) has buckled under pressure by the powers that be and has let out the water.

MUDA Commissioner Dr. D.B. Natesh has clarified that the Lake bund was intentionally dug up as there was a threat of Lake overflowing due to excess rains. Steps will be taken to prevent water entering nearby layouts, he added. Deputy Conservator of Forests Kamala Karikalan said that the MUDA was asked to let out the water without disturbing the Lake’s ecosystem.

Water now flows through underground drainages to reach the Dalvoy Lake where the treatment plant removes obnoxious elements in the water and supplies the same for irrigation purposes. However, the drainages that carry the Lake water are too small to accommodate such a large amount of water and the drainages are overflowing at several places threatening the residents who live in low-lying areas around the Lake. Due to continuous rains since last one month, Lingambudhi Lake has filled up and any excess water would enter the nearby layouts.

Environment activists have said that the MUDA has intentionally breached the Lake bund that is located to the east of the Lake under Survey Number 20. This has prevented the natural flow of water to nearby areas and MUDA has done this only to protect the properties owned by the influential, they alleged.

“Though the Lake is being systematically destroyed by encroachers all these years, MUDA has kept silent and has turned a blind eye to the rampant destruction of the water body. It is surprising that MUDA has now come to the rescue of people who own vast tracts of land around the Lake. In fact, MUDA officers have shown extra interest and enthusiasm in breaching  the Lake bund and this is surprising,” green activists said.

In fact, when certain residents of the area had approached MUDA in the past to let out excess water from the Lake to prevent flooding, officers declined to do so and told the residents that water will not flow to their areas. “Yesterday all of a sudden the Lake bund was breached and it is obvious that the authority has buckled under pressure,” a resident said.

Due to this unscientific move, over 250 houses that are downstream of the Lake are in danger of flooding if it rains heavily. Already moisture is a permanent feature in the layouts that are located in low-lying areas around the Lake.

As huge amounts of water is being let out through small drains, all the drains in the locality are overflowing with sewage water entering several houses and roads in Aparna Layout, Veeraraja Urs Layout, KSRTC Layout and SPN Enclave.

According to Sagar Kishore, a local resident, MUDA has used earth-movers to break the Lake bund and in the process, several trees have been destroyed. “Almost all UGD lines in the low-lying areas have been blocked due to excess water flow from the Lake and several houses have developed cracks,” he said.