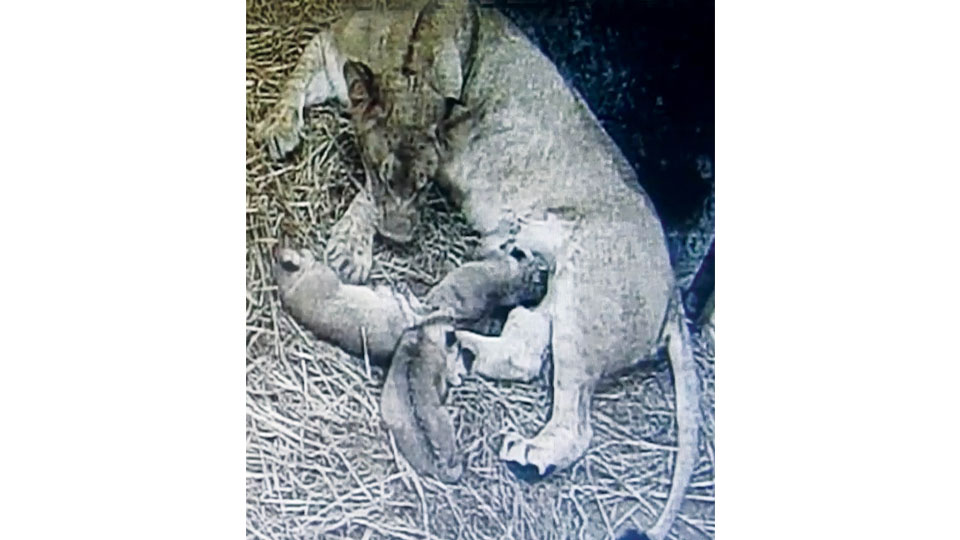 Mysore/Mysuru: Chamarajendra Zoological Gardens, popular as Mysuru Zoo, known for its collection, cleanliness and conservation breeding of endangered species has added one more distinction to its long list of achievements as four-and-a-half-year-old lioness Nirbhaya has given birth to three cubs.

The birth of lion cubs comes after more than eight years, thanks to the captive breeding efforts initiated by the Zoo authorities. It may be recalled here that a white tigress had given birth to three cubs just two months back.

As there is a demand for tigers from different Zoos in India, the Mysuru Zoo has initiated steps to captive-breed them. Likewise, measures are being taken to breed the lions too.

According to Mysuru Zoo Executive Director Ajit M. Kulkarni, the mother and the cubs are healthy and their well-being is monitored continuously using the CCTV camera footage.

“Naturally we are elated to see new guests and the birth has come after a gap of more than eight years,” he said.

“The lactation process is on and no Zoo staffer has ventured near the lioness and cubs. In fact, Nirbhaya is wary of the Zoo-keepers venturing near her even for cleaning purposes. We have left her alone with her cubs and she is not disturbed in any way,” he added.

Nirbhaya has become a mother for the first time and she is taking care of the cubs well. Even the cubs are healthy, Ajit Kulkarni added. At present, the Mysuru Zoo houses six lions including the three cubs born recently. Earlier, it had three lions including one male.