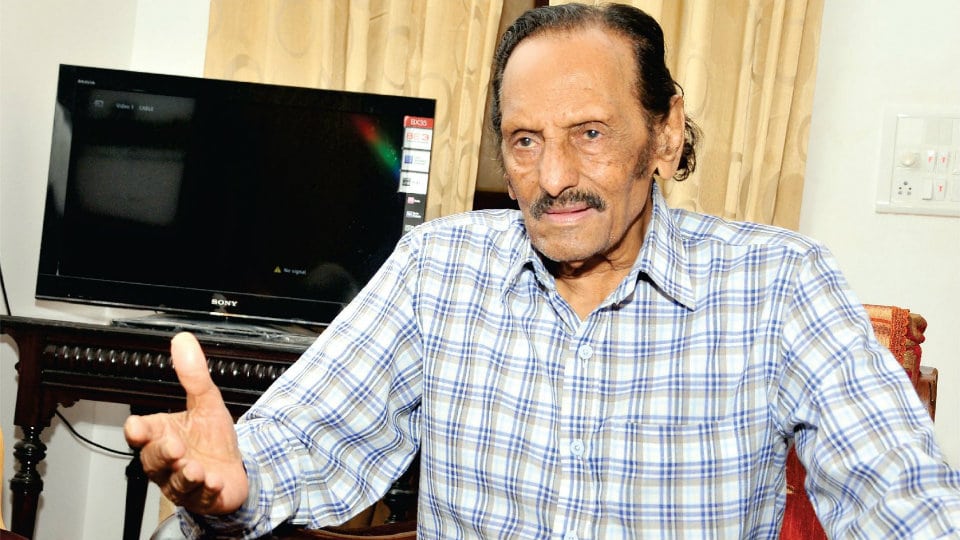 Poets are in that rarefied atmosphere where most of the times a majority of readers do not understand what they write. However, the fact is that the sensitivity and sensibilities they display in their poems do touch the hearts of millions. Their popularity soars when their poems become signature songs like Rabindranath Tagore’s ‘Jana Gana Mana’ or Kuvempu’s ‘Jaya Bharatha Jananiya…’ To this league belongs Nadoja and Nityotsava poet Professor Kokkare Hosahalli Shekh Haider Nissar Ahmed, popular as Prof. K.S. Nissar Ahmed, who inaugurated this year’s Dasara festivities.

Despite his busy schedule, Prof. Nissar Ahmed took time off to speak to Star of Mysore Features Editor N. Niranjan Nikam at the Government Guest House. In this rare, exclusive and candid interview, he spoke in fluent English about Kuvempu, his childhood, his views on current issues and the reasons why he wrote some of the well-known poems like ‘Nityotsava’, ‘Kurigalu Saar Kurigalu’, ‘America America’ and ‘Mysore Zoo’.—Ed

Star of Mysore (SOM): You inaugurated the 407th Dasara though that honour has always been of a Hindu. How does it feel?

SOM: Every Mysurean is happy that you were chosen. After all, you were invited to read your poems at Dasara Kavi Goshti here in 1959. Kuvempu heard you and the rest as they say is history. Please comment.

Prof. Nissar Ahmed: It was a unique occasion.  It was fortuitous too. I myself could not believe when I got this offer. The then Regional Commissioner Venkatesh sent a telegram to AIR Station Director because I was anonymous. Just then I had completed my M.Sc. and I was jobless. I used to go to AIR programmes often so they had my contact. They sent one telegram to K.S. Nissar Ahmed, C/o Station Director, All India Radio, Bangalore. That telegram was given to me by AIR staff artiste A.S. Murthy.

Prof.Nissar Ahmed: Yes, yes. I saw the telegram. It asked me to participate in the Kavi Sammelana on Vijayadashami Day, in 1959, presided over by Rashtrakavi Kuvempu at Rangacharlu Memorial Hall at 9.30 am.

Only two days were left and I was puzzled.  Then, a friend of mine N.S. Venkatram, who is now no more, told me that he would take me to Mysore. I was scared as I did not have a single paise in my pocket. I was scared to ask my father as he would scold me. So it was my friend who brought me to Mysore. I read a poem and Kuvempu was kind enough to recognise me and said “he read a poem three days back in AIR Bangalore along with me.”

It was a memorable event and it was for the very first time I participated in a public function. From then, I started coming to Mysore and attended several functions. Prof. Ha.Ma. Nayak would invite me often and I was invited to release many books by people including R.V. Sundaram. Also, several of my books have been released here.

I have received several awards including Vishwamanava Prashashti in the name of Kuvempu and Bhramara Trust Award instituted by Madhuri Thathachari. Her husband Y.T. Thathachari was a Distinguished Scientist. I was the Chairman of Karnataka Sahitya Parishat when the first Vishwa Kannada Sammelana was held in Mysore in 1985. I conducted the first-ever meeting at Kalamandira which was half-built then. It was a three-day programme. On the first day, Kuvempu presided over the poetry symposium and he was reluctant to come. I told him I would not go out of his house until he accepted the invitation. I have made several friends in Mysore like Chayapathy, Pushpa Chayapathy, Kalanidhi, Thippeswamy, Yogeshwar and many more.

SOM: Majority of us find it very difficult to understand poetry. For instance, the title of the collection of poems that was released on Sept.20, 2017 is called ‘Seemateetana Sirivanta Suggi.’ But when your poems are sung, it resonates and touches the chord. How does this happen?

Prof. Nissar Ahmed: Thank you very much. May be I write about your feelings also and not only my feelings. My feelings are not important, but yours are. And I feel what you feel. I feel joyous when you appreciate. And I feel even better when I come to know several people are singing my poems.

Secondly, I have never ever compromised about my expression. Being a Navya poet too, I never became ambiguous. My reader should understand whatever I write. Poems can have highly intellectual meaning or it might not be a good poem. But it should convey the message and that is more important to me.

In Navya Kavya, there is no such thing as conveying. They used to write according to their own fancies and say it requires intellect to decipher the meaning. I said nothing doing. If I write for others, I must write in a way that they can understand. Otherwise, I must burn it. Why should I publish it? That was my argument. Several of my colleagues and friends who wrote with me did not agree. But today, with the grace of Almighty people have liked my poetry.

Incidentally, during Dasara, CM Siddharamaiah asked me, “Sir, when did you write Nityotsava?” I told him it was in 1968. He was astonished and exclaimed 1968! And in1978 I brought out the cassette and even before that Mysore Ananthaswamy used to sing my songs.

Soon after the Chinese aggression on India, I felt so sad about politicians that I wrote it. Why should the Chinese come all the way from Peking (now Beijing) to the Himalayas? And we were kept in darkness about the aggression. It pained me a lot to see our helpless political masters. The CM heard it and was amazed. He asked me again, 1963? Yes I said 1963. I usually don’t mention it unless someone asks me.

ONE COMMENT ON THIS POST To “I have lived a fine, comfortable and colourful life, says Poet Prof. K.S. Nissar Ahmed-1”