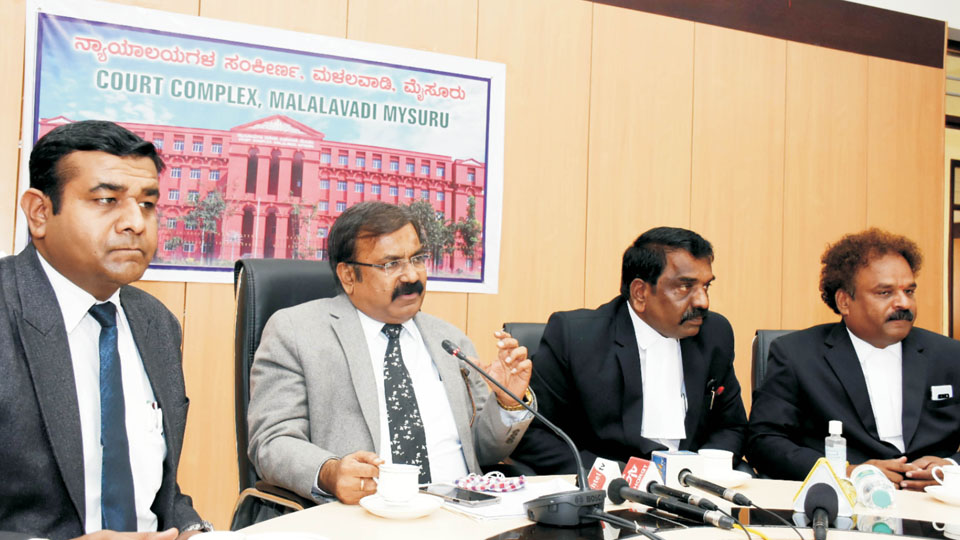 Mysore/Mysuru: The first Lok Adalat of the year 2022, will take place in the city Courts and all taluk-level Courts in the district on Mar. 12.

The Lok Adalat is being held across the State as per the directions of Karnataka State Legal Services Authority (KSLSA), Bengaluru.

Announcing this at a press meet at the Malalavadi Court Complex in Jayanagar this morning, Principal District and Sessions Court Judge M.L. Raghunath, who is also the Chairman of District Legal Services Authority (DLSA), said that it has been proposed to take up 11,120 identified cases during the Lok Adalat.

Noting that it has been proposed to take up 3,770 motor vehicle claims, 2,736 criminal compoundable cases, 4,548 cases under NIA and 66 pre-litigation cases, Judge Raghunath said that the litigants should come forward for taking part in the Lok Adalat as it saves time and money for them.

Stating that there are over 1.09 lakh pending cases in the district, out of which 59,297 are criminal cases and 50,256 are civil cases, he said that out of these, 29,059 cases have been identified for resolution through mediation and counselling.

Clarifying that petty cases too will be taken up in Lok Adalat, he said that Lok Adalat will take up marital disputes on a priority.

Mysuru Court has the record of re-uniting over 25 warring couples who had applied for divorce and Mysuru stands first in the State in settling marital disputes, he added.