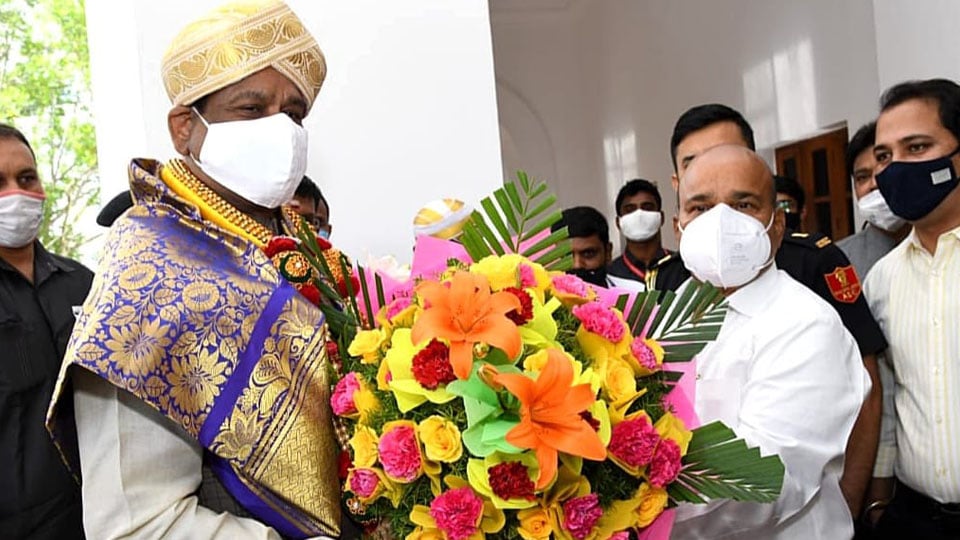 To address Joint Session of Legislature; Opposition Congress to boycott

Bengaluru: Lok Sabha Speaker Om Birla, who arrived in the State capital today, was received by Governor Thaawarchand Gehlot at the Raj Bhavan. It will be the first time that Birla will be addressing the Joint Session of the two Houses of a Legislature.

The theme of Birla’s address at 2.30 pm is “Democracy  – Safeguarding Democratic Values.”

Chairman of Legislative Council Basavaraj Horatti, Speaker of Legislative Assembly Vishweshwar Hegde Kageri; Ministers, Members of Parliament, MLCs, MLAs and other dignitaries will be present on the occasion.

Today will be the last day of the 10-day Legislature Session which started on Sept. 13.

In a statement, Karnataka Pradesh Congress Committee (KPCC) President D.K. Shivakumar said his party would boycott the address as it was against the provisions of the Constitution.

“We requested the Assembly Speaker not to hold such a Joint Session of the Legislature in the Assembly and we urged him to hold the programme at the Banquet Hall in the Vidhana Soudha. But the Speaker turned down the suggestion,” Shivakumar told the presspersons.

Noting that only the Governor and the President were eligible to address both Houses of the Legislature, Shivakumar said Birla’s speech was “unwarranted.” He further said that the Legislative Assembly “cannot be used for political purpose.”

He said that the State Government and the State Legislature were creating a bad precedent by inviting the Lok Sabha Speaker to the Legislative Assembly to deliver a speech.

READ ALSO  'Affordable Healthcare to All'

Shivakumar also condemned Speaker Vishweshwar Hegde Kageri’s decision to invite Birla and said it was “against the spirit of the Constitution and rules of our Democracy.”