Home » Feature Articles » LOOKING BACK . . . On Grandparents and Children… 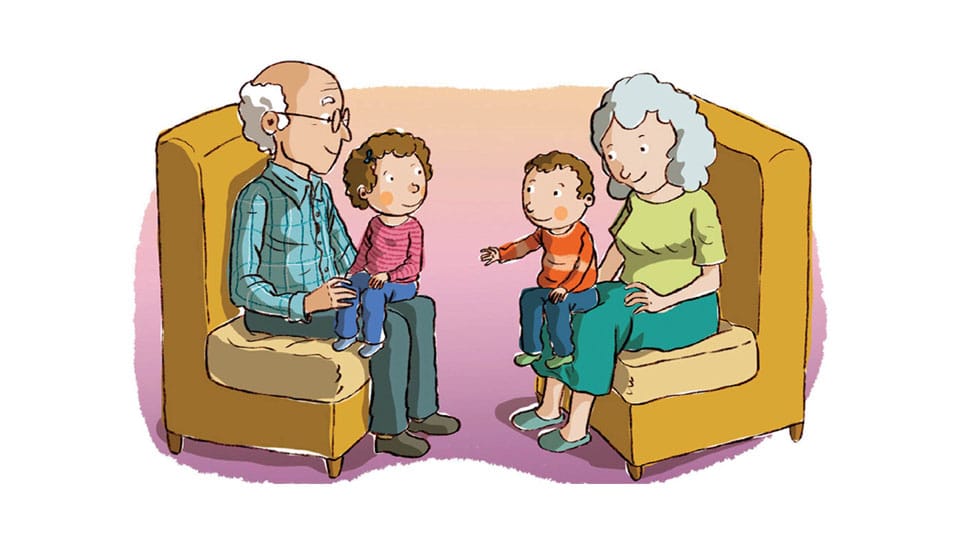 LOOKING BACK . . . On Grandparents and Children…

A few weeks ago I had written about how we were waiting for a certain happy event, now it’s in the next stage. It has finally happened after months of anticipation. We have become grandparents to a fine baby boy and he is all of two-months-old as of now.

He is in San Francisco, thousands of miles away from us, but thanks to technology distances don’t matter. His daddy sends us videos or puts on his phone camera and we are able to see him yelling, moving his arms and legs and generally being as infantish as he is meant to be.

What is it about babies that is so enchanting and captivating? It’s their newness, their innocence their toothless old man gums and their star-like hands and feet. It’s the fact that God creates such perfection in such a small body.

Being a grandparent is a unique feeling. All the tenderness, all the love, all the anxiety for the little one’s good health is there, plus the reassurance that his parents are there to take care of him 24/7.

September 10th was National Grandparents Day in the US and internationally in other countries. What a wonderful way to celebrate grandparents all over the world, the love and special caring that they bring to their grandchildren. I know that I feel very privileged to be an ajji and even though it may be months before I get to see our grandson, the time we spend watching his videos and cooing over his photos is well worth every minute.

His grandpa gets agitated if there are any pictures of the young one crying but my logic is, he has been blessed with a lusty pair of lungs, let him by all means use them to their full extent!

READ ALSO  LOOKING BACK . . . On Books and Babies

Grandparents fulfill an important need in a child’s life. As families grow smaller and distances between families increase, visiting grandparents and spending time with them is extremely important for the child to connect with his or her extended family.

Sadly, this also makes me think about the unlucky kids who live lives of misery for some reason or the other. When I read about the rape and assault of little five- year-old children, the horror is that such vile criminals and perverts exist in our society. Those who are supposed to be care-givers turn out to be the perpetrators of evil themselves. Rape is a heinous crime, on top of that the victims are innocent children whose only fault is that they live in the midst of violence and perversion.  Unfortunately, the lives of children who are in the care of orphanages and remand homes are often a living hell with sexual abuse rampant, often carried out by the administrators themselves.

How do we protect our children, make sure that their childhood is not fractured, their innocence forever lost? Often the abuse is carried out by a person close to the child, a relative who the child trusts. Often the perpetrator is a friendly neighbour with evil in his heart and mind. This is a perpetual problem of our society and we must be vigilant at all times.

What can we do to ensure that the children of our society have unimpaired physical and mental health? Although institutions exist all over the world to take care of those traumatised by war for example, or those orphaned in disasters, they are far from adequate.

I read a very touching true story recently by Saroo Brierley called A Long Way Home. Saroo Brierley was born Sheru Munshi Khan in Ganesh Talai, a suburb within Khandwa, Madhya Pradesh. When he was young, his father left his mother, throwing the family into poverty. His mother worked in construction to support herself and her children but often did not make enough money to feed them all, and could not afford to send them to school.  One day Saroo accompanied his older brother Guddu to the station where Guddu cleaned Railway carriages and begged for money. Little Saroo while waiting for his brother to return got impatient and boarded a train thinking Guddu was on it. He found there were no doors to the adjoining carriages. Hoping his brother would come for him, he fell asleep. When he awoke, the train was travelling across unfamiliar country. Occasionally the train stopped at small stations, but Saroo was unable to open the door to escape. Saroo’s rail journey eventually ended at the huge Howrah Railway Station in Kolkata.

After that what happened to Saroo is amazing and frightening. He survived and was eventually adopted from an orphanage by an Australian couple. When you read Saroo’s story, later filmed as Lion with Dev Patel starring as the main character, you feel a great sense of thankfulness that Saroo was not abused even though he came dangerously close to it sometimes. His life after he was adopted by the Brierleys in Australia, was incredible good fortune and he was able to grow up as normally as possible. He searched for his mother after he grew up, and through Google he was able to locate his home town, and eventually travelled to India and met his family. It is an amazing story and I would recommend that everyone read it.