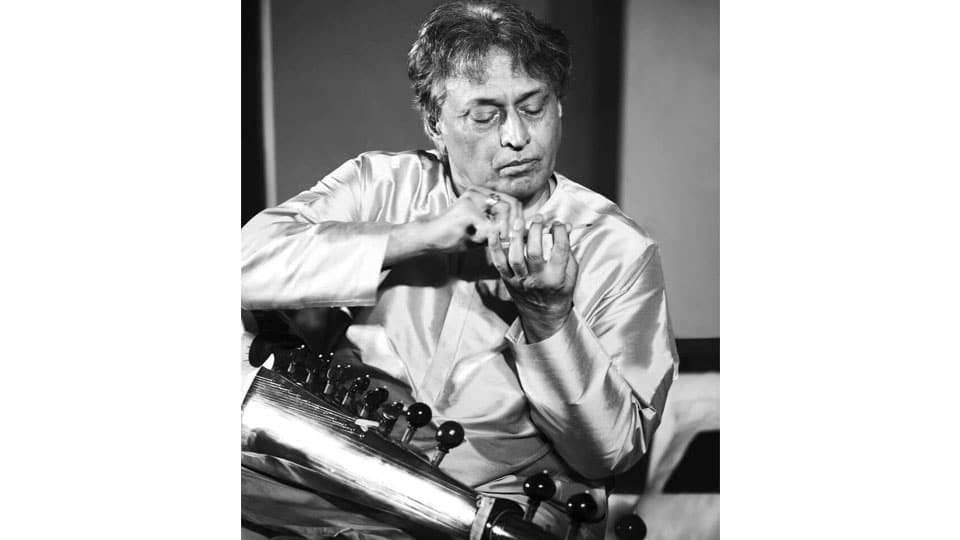 In the last year of my stay in “Hong Kong Island”, the city had become home to me. I still retain mental images of its physical beauty; Tiger Hill sloping down to the waves of Deep Water Bay, Chinese Junks and pleasure craft on the placid South China Sea.

Hong Kong had its own Philharmonic Orchestra and offered popular Chinese music and Peking Opera too. Though Indian classical music was celebrated in the US and Europe, it had hardly  a foothold here in the far East.

So when Ustad Amjad Ali Khan, already acclaimed in the US, arrived to give a sarod recital in Hong Kong, we were delighted. He was accompanied by his beautiful wife, Subhalakshmi Barua. He is the sixth artiste of his Bangash family Gharana.

At the concert, the sarod was taken out its strengthened case, ready for tuning. But the leather top of the right hand tabla was cracked across. The Ustad reached across to check the damage, a finger nail snagged on a rough edge and broke. Sarod players use their finger tips on the strings. But Ustad Amjad Ali Khan has modified the style to use his nails to produce a uniquely expressive ringing tone. He took out a nail file from a manicure case to repair the damage. A ripple of laughter went through the uninitiated audience.

Worse was to come. A flurry at the entrance showed some organisers coming up with a “replacement” for the broken tabla… a small red Chinese drum, used for dragon dances or other celebrations. Ustad Amjad Ali Khan saved the day, thanking the organisers and handing back the drum with a gracious gesture. He  delivered a soulful Aalaap [raga development] which did not need a percussion accompaniment followed by a fast tempo item with a basic rhythm, played by his accompanist on the unbroken left hand drum. The awkward situation actually turned into a memorable concert, the audience mesmerised.

The Emergency was still in force in India. Muhammad Yunus was a diplomat inducted into the Foreign Service by Pandit Nehru. After retirement, he became the Special Envoy of Prime Minister Indira Gandhi, a trusted adviser in her inner circle. He headed Trade Delegations and Exhibitions round the globe to promote Indian products. He came to Hong Kong on such a mission. He was accompanied by a cultural delegation, the star being the singer, Usha Uthup. Though she was famous internationally by then, it was her first visit to  Hong Kong. Welcoming words in Tamil earned me a warm smile.

At the concert, I was seated next to the Minister. He was already in an irascible mood after a day of appointments and questions by journalists about the Emergency. I hoped he would relax and enjoy the cultural show.

Usha Uthup made a glittering appearance. Strings of jasmine, a big bindi on her forehead, jhumkas, necklaces and glass bangles set off to advantage her green and gold Kanjeevaram saree with a red border. A poised performer, she soon had the audience with her, starting with romantic songs, switching later to livelier numbers.

The Minister, from a slightly slouched position, sat up erect. As lively turned to mildly raunchy, I could see a muscle working in his jaw. I nervously suggested we could now go home, only to be glared at and told, “No, I must see this through to the end.” The last straw for him was a number called “Chastity Belt” which had the audience applauding, clapping and whistling. Standing up, he declared the entertainment over.

He said this music was unseemly, Usha Uthup was mortified even though my husband, Madhavan, defended her strongly. “You will lose your job,” she whispered.

Usha Uthup is a vegetarian, so that night I made Tamilian style comfort food for her; rasam, white rice, thick curds, deep fried appalam and tender mango [vadu manga] pickle, a homely meal, which she relished after meat-filled Chinese delicacies.

The Emergency was lifted and elections were held. Madhavan kept his job and Usha Uthup garnered glory after glory. Recalling this story, I tried to look up her favourite songs on the Internet but Chastity Belt as SHE sang it in Hong Kong is not mentioned in the list!

A move back to New Delhi was our next posting. Shri Atal Bihari Vajpayee became Minister of External Affairs in March 1977. An informal gathering was organised for him to meet Foreign Service Officers. Poetry reading and music were to replace long speeches. I was asked to sing for just five minutes and decided that the Surdas Bhajan, “Akhiyan Hari Darshan ki pyaasi”, would be suitable. The lyric has several stanzas, each with a different ending. In the last one Surdas says that without sight of his Prabhu, his Lord, he would like to be ritually beheaded at Kashi [Leho Karvat Kashi]. Strumming my Tamboora, I began well enough but when I reached the last but one stanza, I looked up and saw Shri Vajpayee following the singing carefully. My concentration broke and I sang the last line out of place, having to  repeat it at the end. Later he smiled and said  “You sang well but you beheaded yourself twice at Kashi” [Achcha gaya, lekin aapne do baar Karvat Kashi le li].

In these days of menace, uncertainties and loneliness too, we happily revive past memories of happiness with poignant longing, missing the carefree liberty of pre-Covid days but carrying on with hope in our hearts.