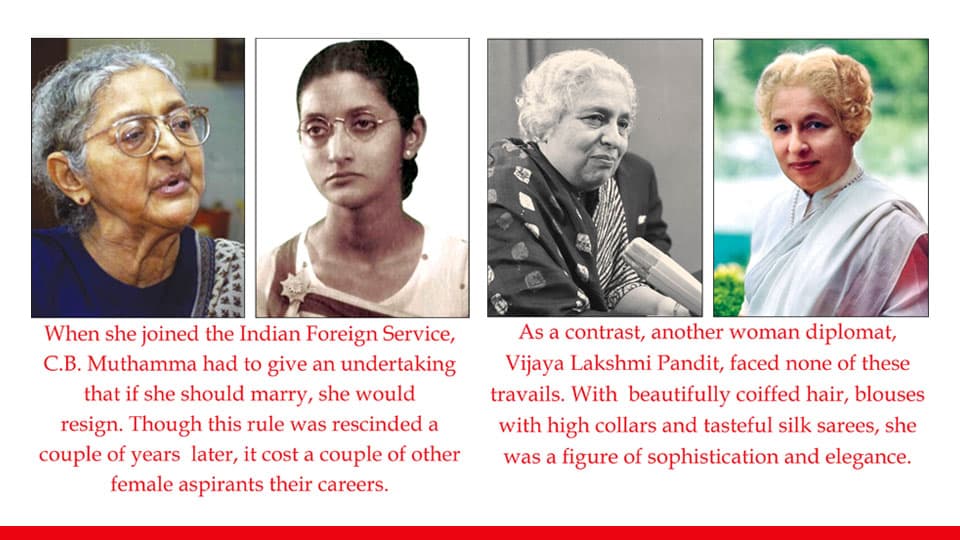 A Toast to Diplomats

Looking back on my thirty-five years as an Indian Foreign Service (IFS) wife, memories come flooding back; some happy ones, some of wonder, some of stress and tension. Holding an Indian Diplomatic Passport, I was a member of the Embassy, the official hostess of my husband  A. Madhavan. I ran the house, helped to make friends with local people, tried to project a good picture of India when we entertained. Life was often hard when faced with linguistic, domestic or medical problems in unfamiliar or unfriendly settings.

Life for the Women Foreign Service Officers of India, however, was hard in the initial years. Our Foreign Service was hierarchical and conservative in format. The rules were heavily weighted against women.

Chonira Belliappa Muthamma (C.B. Muthamma) was the first woman to pass the UPSC exam in 1949 and to opt for the Indian Foreign Service. Born in Virajpet, Kodagu, she was brought up by her mother after she lost her father at an early age. She did her post-graduate degree in English Literature in Madras (Chennai). She held steadfastly to her goal of being an Indian diplomat in spite of many deterrents. When she joined the service, she had to give an undertaking that if she should marry, she would resign. Though this rule was rescinded a couple of years  later, it cost a couple of other female aspirants their careers. Ambassador Rukmini Menon was another successful woman diplomat after Muthamma.

Muthamma’s undeniable excellence made it impossible deny her a place in the Foreign Service. Yet for some years she was not sent on a foreign assignment. She was at last  posted as Third Secretary to the Indian Embassy in Paris, and in later years as Ambassador to Hungary, Ghana and the  Netherlands. Her  struggle for gender equality has helped later Indian women diplomats.

In 1979, she went to the Supreme Court against the Government of India, citing gender discrimination. In a landmark judgement, Justice V.R. Krishna Iyer ruled in favour of Muthamma, and thereby also helped the many women who now have joined the IFS after her.

She never stood for unfairness and deceit. For a while we lived in a big gated colony in Delhi where she had an apartment. Tamil people, many from Salem, worked there. Once there were complaints of valuables missing.  Krishnan and Gopalan, two Tamilians who had been framed for the thefts, were taken away to the Police Station. But though subjected to brutal interrogation, they did not break down and were released. Muthamma discovered  the real culprits, Krishnan and Gopalan were exonerated  and the guilty were sacked.

Muthamma had acquired a farm in Mehrauli near Delhi in the early years. When she retired, it was worth a very large sum of money if sold. But she chose to give it away to charity; very few people know of this generous gesture. Muthamma was fond of cooking and published a book “The Essential Kodava Cookbook” and also a book of essays titled “Slain by the System…” An admirer of hers remarked it would be more apt to say “Slayer of the System.”

After we retired and came to live in Mysuru, she visited us a couple of times with her brother en route to Bengaluru. Smiling and relaxed, she enjoyed the sweets made for her. We both respected and admired her courage and will power.

As a contrast, another woman diplomat, Vijaya Lakshmi Pandit (1900-1990) faced none of these travails. Originally named Swarup Kumari Nehru, eleven years younger than her brother, Pandit Jawaharlal Nehru, schooled in Switzerland, her background was one of aristocratic status and wealth. However, she was influenced by Mahatma Gandhi. She was politically active in local self governing bodies in India and later “entered” diplomacy when she was sent as Her Excellency, Indian Ambassador to the erstwhile Soviet Union (1947-1948). She was the first Asian woman to be President of the UN General Assembly in 1953. With  beautifully coiffed hair, blouses with high collars and tasteful silk sarees, she was a figure of sophistication and elegance.

In 1954 she was appointed High Commissioner to London. She was acclaimed for her tact and diplomacy. She also maintained contacts with important dignitaries and gave elegant parties attending even to small details to ensure perfection. We were told this apocryphal story by a High Commission Official who claimed he was present at the occasion.

A big party was to be held at the High Commissioner’s Residence so he was inspecting a brass plaque in the foyer. A lady from our own High Commission, a young diplomat’s wife, who was expert at flower arranging, came in early, took one look at the flower arrangement placed under the plaque and exclaimed loudly, “Oh dear! What a ghastly arrangement!”

She then pulled it to pieces and rearranged it to her satisfaction. The embarrassed official, with bent head, kept polishing the already gleaming plaque. Then a curtain in an alcove at the back was pushed aside and Her Excellency Vijaya Lakshmi Pandit, who had been there arranging a second flower vase, emerged.

The lady stammered, “I came by to see if I could be of help…” Vijaya Lakshmi Pandit replied in silky tones, “Thank you dear for ALL your help. Everything is  under control now. Goodbye!” As soon as the woman left, she said to the official, “Never let that woman come here again.”

Women in the Indian Foreign Service have now held the post of Foreign Secretary with great distinction, others are heading important missions worldwide, bringing honour to themselves and to India, the country  they represent abroad. I felicitate them all. I was lucky to be a part of that world, I was enriched to see lands and meet new people. I could not have done that without being a diplomatic wife, a Diplomate!

3 COMMENTS ON THIS POST To “A Toast to Diplomats”