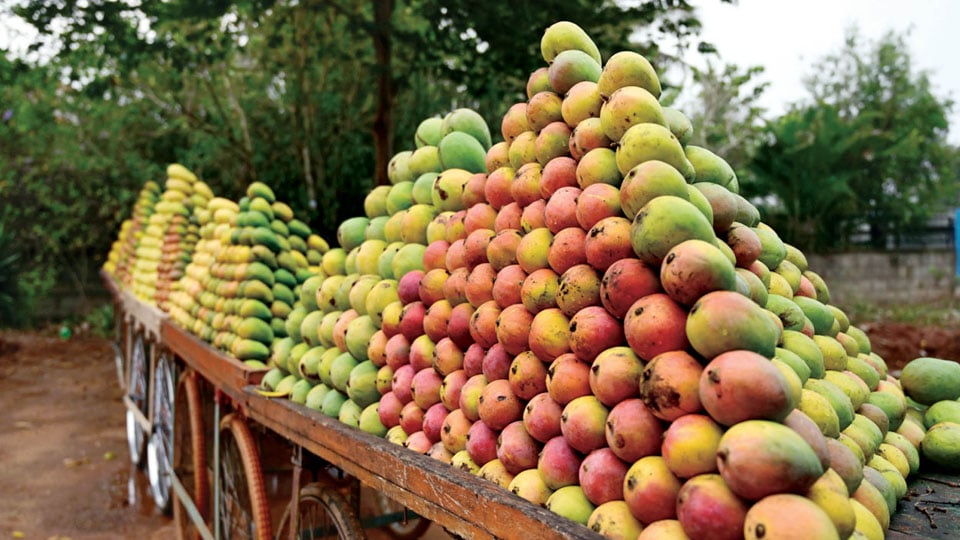 Waiting for buyers along the Mysuru-Hunsur Highway has become a routine affair for mango farmers from Nagavala and its surrounding villages lately.

The season has come after two years of COVID and this year, the sales are marred by low yield. Though the quality of the fruit and its aroma and sweetness are unmatched, there is not enough production as most of the flowers have fallen due to unseasonal rains in the flowering season.

Prices are naturally high and the sales are not up to the mark when compared to the pre-pandemic times. Over 20 to 30 push-carts with plastic sheets as shade or under the trees dot the Highway as soon as one crosses Mysuru. The carts extend to a two-kilometre stretch from Yelwal to Ankanahalli. Mangoes are supplied to carts by growers and they are marketed either by the family members or relatives. Fruits arrive fresh every day or once in two days from Nagavala, Benkipura, Halebeedu, Bilikere, Bettadabeedu, Beerihundi and Hullahalli.

Ripe and semi-ripe mangoes are arranged like pyramids on the push-carts to grab the attention of hundreds of vehicles that pass on the road. As soon as a vehicle stops, vendors crowd them with a handful of mangoes urging the occupants of the vehicle to have a look at their fruits. The vendors claim that the fruits are delicious and chemical-free.

They wave and bend before at the corners of their push-carts, enticing the travellers. While many of them are found on both sides of the road, a thick concentration of carts can be seen near the road humps. It is easy to stop a slowed down vehicle thanks to the road hump. Even the commuters readily oblige and are spoilt for choice.

According to the vendors, prolonged rain last year that increased moisture in the soil resulted in delayed flowering and also resulted in crop damage as flowers fell in large quantities. “Two years COVID hit us and no one was ready to purchase fruits from us as people feared the spread of the virus. This year, the production is only 30 percent and as such, the prices are high,” said Sunil, a vendor.

Generally, the mango trees that are grown in Nagavala belt are healthy and a medium size tree yields 100 kgs of fruit every year. “This year, the yield is only three to four kgs. In the pre-pandemic season, we used to net an income of Rs. 6,000 to Rs. 7,000 per day and the profits would be counted after paying the grower, sellers and other expenses like food. This year, the income has come down to Rs. 3,000 to Rs. 4,000,” said Chandu, another vendor who sits next to his cart from 7 am to 7 pm.

Weekdays are dull and rain acts as a killjoy most of the evenings. However, a line of vehicles are usually seen near all the carts during weekends. Most commuters on a jolly trip to Kodagu, K.R. Nagar and Hassan stop by and purchase fruits to eat them on their way. Even professionals returning to Kodagu after a week-long work too buy fruits to their houses.

“Many people believe that now mangoes are tasteless and rains have to completely stop for the fruits to accumulate sweetness. So many do not stop near our carts now as they are waiting for the rains to cease,” said Chandu who has been doing this business for the last seven years.

They sell various types of mangoes like Sindhura, Malgoba, Raspuri, Mallika and Alphonso. While prices of all the varieties range from Rs. 150 to Rs. 180 or Rs. 220 per kg, Alphonso, which weighs just 3 to 4 fruits per kilogram, sells for a minimum price of Rs. 280 to Rs. 300.

Most of the customers ask for Raspuri and Badami. The fruits that are over-ripe and blackened are not discarded but are fed to livestock.

Role of Yejamanaru in mango trade

Chandu’s uncle Lokesh is in the trade from 27 years and the tradition has been passed on by Siddhanayaka, Chandu’s grandfather. People like Siddhanayaka who are called ‘Yejamanaru’ in this belt are highly respected for their business acumen. They assist the vendors right from procuring mangoes, ripening them, carrying it to the individual carts and also price fixing. Their decision is final in many aspects and the younger lot obeys meekly.