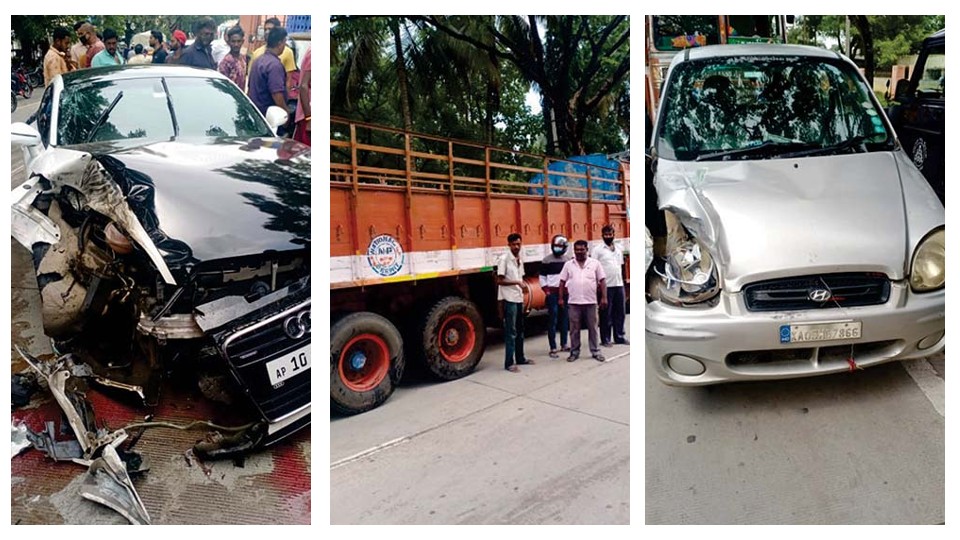 Mysuru: In a serial accident involving four vehicles that took place in front of KSRTC Depot on Nelson Mandela Road in Bannimantap this morning, the occupants of all the vehicles had a lucky escape, though their vehicles suffered damages.

Due to the impact of the collision, the Audi car turned turtle and rested on the spot with its top hitting the road. However, all the  occupants of the car, who are said to be three in number, escaped unhurt, as the Air Bags opened up, thus saving them from injuries while no one in the lorry sustained any injuries.

At the same time, a Nano car that was closely following the Audi car from behind, made a slight deviation in order to avoid hitting the accident-ridden Audi car from the back side, when it (Nano car) met with a head on collision with a Hyundai Santro car that was coming in the opposite direction at the moment. Both the cars suffered minor damages and the passengers in them escaped unhurt.

The Nano and Hyundai cars left the spot even before the Police could arrive, it is learnt.