Home » News » Made to order: 18,000 bulbs to illuminate Mysore Palace this Dasara 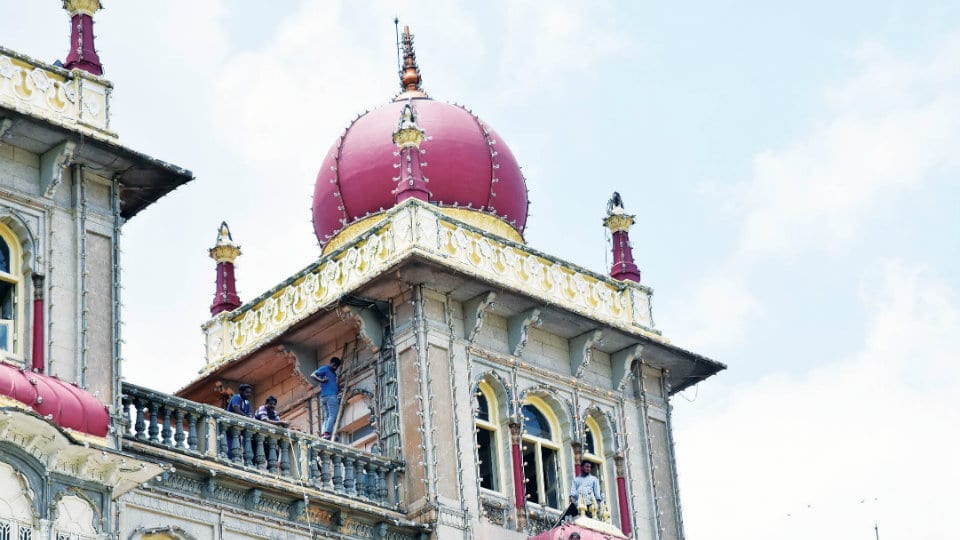 Made to order: 18,000 bulbs to illuminate Mysore Palace this Dasara

Mysuru:  About 18,000 specially-ordered incandescent bulbs will be replacing the defunct bulbs at the Mysore Palace. The orders have been placed with manufacturers in Delhi and Hyderabad and these bulbs made especially for the illumination during this Dasara has threads in them.

“Every year we order for 20,000 bulbs during Dasara so that we can replace them with the defunct bulbs. The Palace staff themselves will replace most of the bulbs, while only a few adorning the cupola (gopura) will be replaced by experts using crane for which tenders will be called for,” said Mysore Palace Board Deputy Director T.S. Subramanya, speaking to Star of Mysore, yesterday.

The orders had been placed with two bulb manufacturing companies that produce incandescent bulbs and the replacement work will be completed within ten days, he said.

Some of the non-functioning bulbs in the chandeliers in the iconic Durbar Hall of the Mysore Palace will also be replaced, besides the ones at Jayamarthanda Gate and other Gates. The Gates and walls will all be painted as many of them have been discoloured with pigeon droppings, he said.

The main purpose to replace the bulbs which are nearly one lakh in all, is to enhance the beauty of the Mysore Palace and that is the main focus of the Palace Board. The Palace has always been known for its magnificent illumination which turns the whole place into a fairyland. The visitors are filled with awe the moment the lights of the Palace are switched on and it never fails to evoke that feeling even if one sees the illumination a hundred times, said Subramanya.

Asked why the incandescent bulbs only were being used instead of LED bulbs, he said that the latter does not have the same golden glow, as the ordinary 15 watt bulbs. Besides, the LED bulbs produce a shadow and hence it is not used.

There are three transformers which keep the bulbs glowing. During Dasara, the Palace will be illuminated on all the ten days. Every month the electricity bill is about Rs.9 lakh, he added.

Dasara
After deluge, Kodagu faces the brunt of rolling boulders
Come October, use plastic bottle-crushers at Railway Stations, get paid