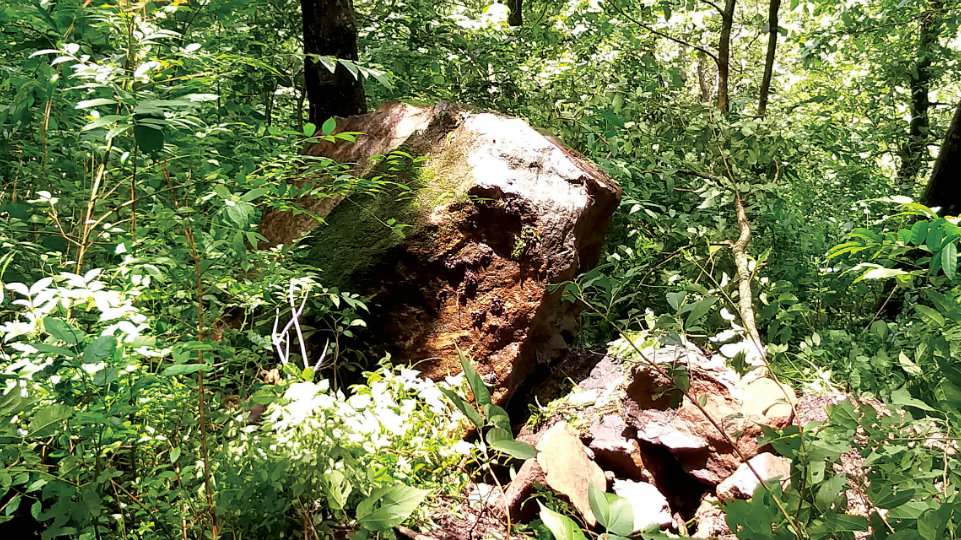 After deluge, Kodagu faces the brunt of rolling boulders

Madikeri:  Even as Kodagu is yet to recover from the natural disaster which struck the district for two consecutive years, the lush green district is now facing a new problem, with large-sized boulders rolling down from the hills.

Following heavy rains, a large sized boulder rolled down from Kolikallu hillock at Peraje village a couple of days ago.

The rolling down of boulder has scared the villagers, as it is for the first time that they have been witness to such an incident.

Last year, the tremors around Subramanya forest range had led to huge landslides at Jodupala, resulting in many causalities.

At the same time, a major landslide occurred at Bangarakodi area of Kallu Betta. This year, Thora village along Kerala border and Bhagamandala area faced the fury of rain deluge, with a major landslide occurring at Thora, taking out the lives of nearly 10 people. Also, wide and deep cracks (chasms) have developed on hillocks of Brahmagiri hill range.

One side of Kolikallu hillock is partly covered by boulders and the first boulder started rolling down from an area called ‘Kopparige Gudde.’ Thereafter, boulders also rolled down from Kundadu Chamakaje too, according to the villagers.

As a natural water stream flows at the foot of the hill, the villagers could not hear the sound of the falling boulder due to the roaring sound of the flowing stream. But the people living on the other side of the hillock, heard the sound, following which they rushed to the spot, when they discovered that large boulders had rolled down from the hillock. As the surface of the boulders was flat, there was not much damage. The boulders are said to have rolled down, cutting through plants and bushes, thus causing concern among local residents.

But as of now, the only relief for villagers is that the boulders have stopped at the bottom of trees.

The locals have urged the Mines & Geology and Forest Department officials to visit the spot and find out the reasons for the sliding of boulders from the hillocks and take necessary measures to prevent any further damages.

Kodagu
‘Yoga Dasara’ under Fit India concept to have new inclusions
Made to order: 18,000 bulbs to illuminate Mysore Palace this Dasara