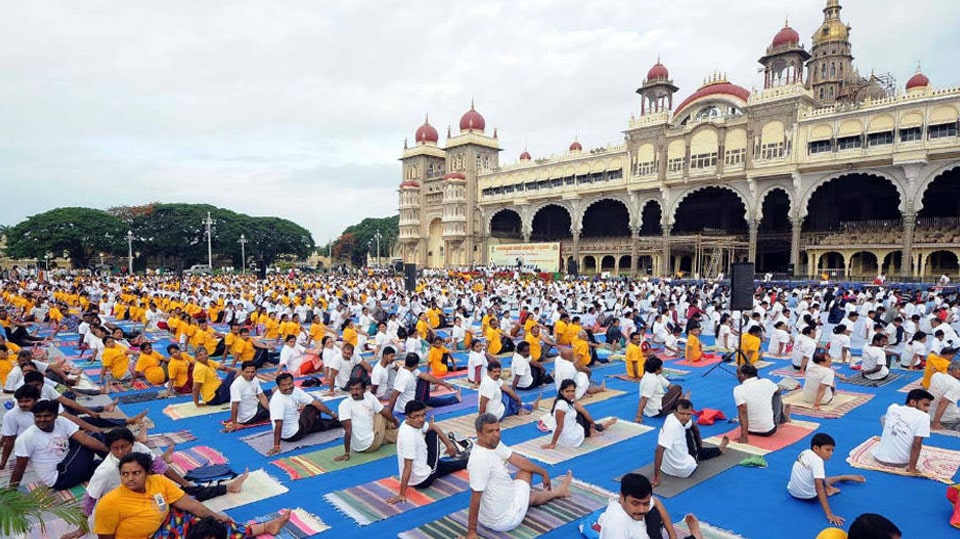 ‘Yoga Dasara’ under Fit India concept to have new inclusions

Mysuru: Yoga Dasara will be inaugurated on Sept.30 and will go on till Oct.6 featuring various programmes centred around yoga and ‘Fit India’ concept.

Yoga Dance-Drama: After the inauguration of Yuva Dasara on Sept.30 at 5 pm at Oval Grounds here, over five troupes would present a yoga dance drama.

Yoga Vahini: For the first time, a yoga camp for media personnel (both print and electronic) has been organised on Oct.1 from 8 am to 9 am at Sougandhika Park in Kuvempunagar.

Yoga Sambhrama: Yoga Sambhrama is organised on Oct.2 from 6 am to 8 am at Palace premises here featuring mass yoga performance by leaders of all religions.

Yoga Contest: A State-level Yoga Contest is organised on Oct.2 from 9 am to 5 pm at P. Kalinga Rao auditorium in Dasara Exhibition Grounds with participants in the age group of 8 to 55 years.

Yoga Chain: School and College students will form a yoga chain on Oct.4 at Palace premises here from 9 am to 11 am.

Swachh Sarvekshan Yoga: A yoga camp for Pourakarmikas is organised on Oct.4 at Sougandhika Park in Kuvempunagar.

Yoga Trek and Durga Namaskara: Yoga performers would climb the steps to Chamundi Hill on Oct.6 at 6 am and perform Yogasanas at the hill top.