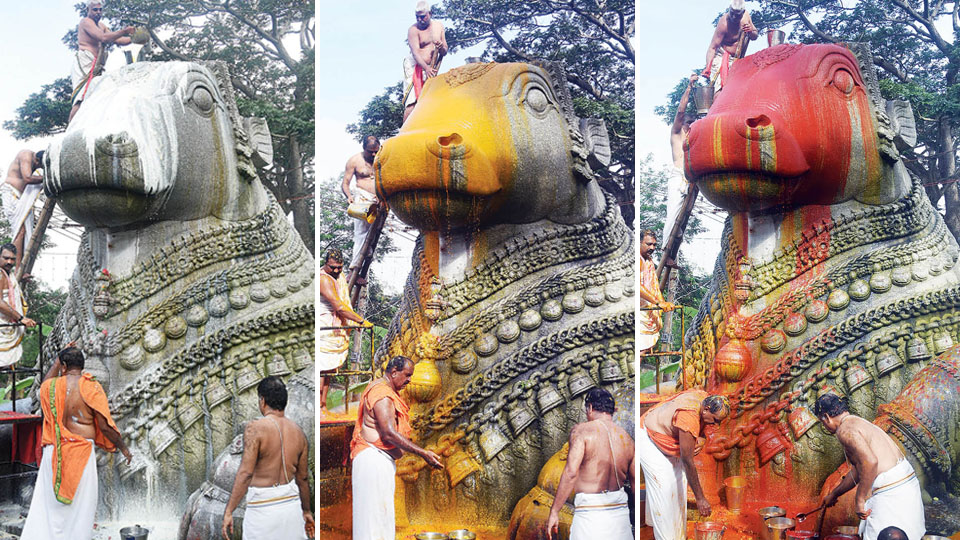 The event was organised by the members of ‘Bettada Balaga Charitable Trust’ that has been conducting the rituals for the past 15 years and this is the 16th year. The sacred ritual is performed annually in the Karthika month of the Hindu calendar.

Tomorrow, a Deepotsava will be performed.

Hundreds of devotees had gathered around the statue to witness the ritual his morning and the ceremony was led by Adichunchanagiri Shakha Mutt Seer Sri Somanathananda Swamiji and Hosamutt Seer Sri Chidananda Swamiji. As the road between the View Point and the Nandi Statue has caved-in at many places, there was not much vehicular traffic.

But as it was a Sunday, there were a sizable number of regular walkers who had the glimpse of the ‘Mahabhisheka.’ 28 litres of milk, 10 litres curd, 2 litres ghee and 5 kg honey and a host of sacred pastes, fruits, sugarcane juice and other ritualistic items like turmeric, vermillion, sindoor, sandal paste, bilvapatra were used.

It is said that the practice of performing ‘Mahabhisheka’ to the monolith existed during the reign of Wadiyars. This year, the celebrations were simple like last year due to COVID.

The statue of Nandi, the celestial bull, rests midway along the road to Sri Chamundeshwari Temple and the monolithic statue is a major tourist attraction. The statue, reckoned to be at least 352 years old, was sculpted during the period of Dodda Devaraja Wadiyar who ruled from 1659 to 1673 and is the only one of its kind in the State. The statue is 3,489 ft above mean sea level. Though Nandi is found adorning Shiva temples, this is one of the few standalone statues, measuring about 15 ft in height and 24 ft in width.