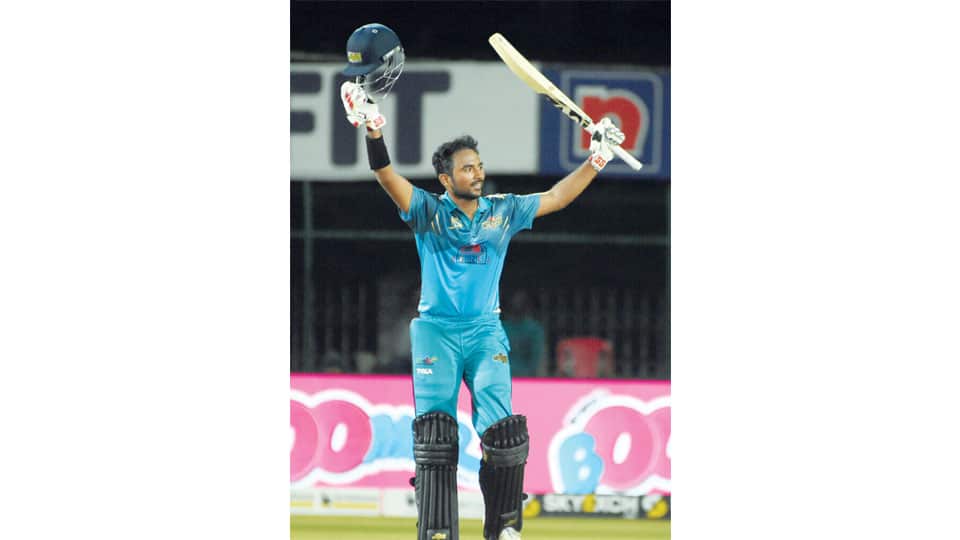 Patil’s assault helped the Mystics register a comprehensive 9-wicket win. Patil, who got to his 50 off 15 balls, reached his 100 in 42 deliveries, having hit 6 sixes and 10 fours up until then. He finished unbeaten on 112.

Asked to bat first after rain delayed the toss, the Mysore Warriors got off to a flyer with the in-form openers Karun Nair and Nihal Ullal scoring at good clip. They were motoring along at 10 runs an over or so before the skipper was run-out for 18.

Nihal and Naga Bharath tried to keep the momentum going but it was the opener who fell in the process, walking back to the hut for 27 in the 9th over. Gulbarga Mystics had applied the brakes for a bit, but Pavan Deshpande came in and went on the attack from the get-go.

Deshpande, who can make good use of the long handle, scored 41 in quick time, hitting four boundaries and a six. He and Bharath added 63 in a crucial partnership before Deshpande was dismissed.  Bharath and S. Shivraj took the total over 150, before the former was dismissed for 35. Shivraj (17*) and Shubhang Hegde (5*) rounded up the innings with the Warriors getting 160/4 in 19 overs.

In response, it was absolute carnage from Gulbarga Mystics opener Rohan Patil, who hammered 32 runs in the second over off Vidyadhar Patil, hitting 4 sixes and 2 fours in the over. Jeswath Acharya at the other end had the best seat in the house, but could not stay in too long as he was out for 3 in the fourth over, with the score on 49.

At the end of fifth over, Patil got to his half century in 15 deliveries, the fastest of the tournament so far, having hit four sixes and five fours in that time. He was in no mood to slow down, hammering three fours and a six in the next over as K.L. Shrijith took up his spot at the other end.

The Mystics were 80/1 in 6 overs and looking well on course for a big win as Patil wasn’t in the mood to spare any bowler. A timeout and few quite overs later, Shrijith too joined the party, while Patil was nearing a marvellous century. In the 13th over, Patil brought up his century off 42 deliveries with his side almost over the line.

Patil brought up the century partnership with Shrijith (46*) with a six, before finishing proceedings with a boundary at the start of the 15th over.