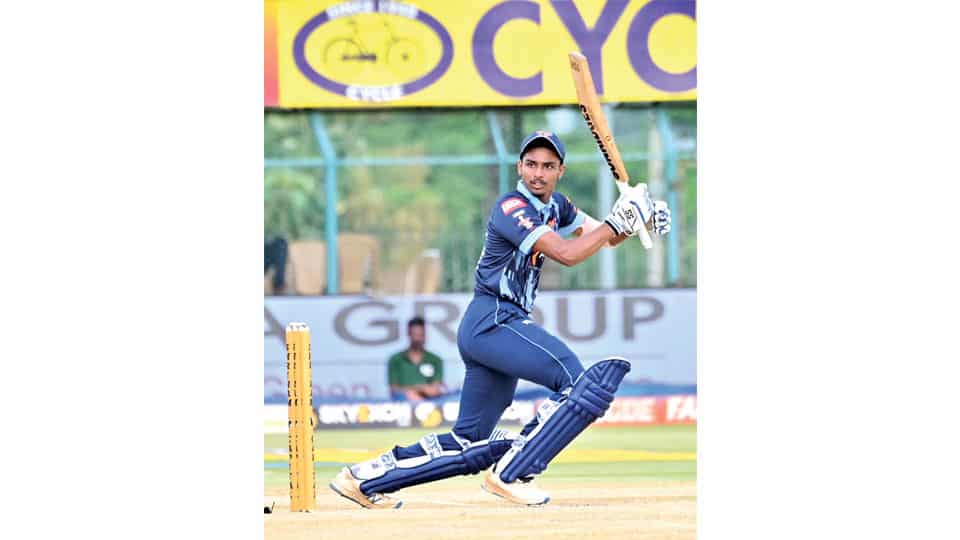 The Mayank Agarwal-led Bengaluru Blasters registered a convincing 35-run win against Mangalore United on Thursday afternoon, by the VJD method after rain turned up with poor timing.

Mayank and L.R. Chethan were at the dangerous best, as they batted the opposition out of the game while Rishi Bopanna turned on the style with the ball, picking 4 wickets.

Put into bat first, the Bengaluru Blasters got off to a great start with captain Mayank Agarwal and  Chethan firing on all cylinders in the powerplay, taking the score to a solid 70/0 at the end of the first 6 overs.

While the more experienced Mayank mixed caution with aggression at one end, Chethan threw the kitchen sink at the Mangalore bowling. Just after the powerplay, Bengaluru lost Mayank for 44 off 20 deliveries. That did not slow down the Blasters, as Chethan got to his fifty soon, finishing up on 66 from 39 deliveries, having hit five sixes and four boundaries. By the time Chethan was dismissed, the score was at 126/2 in the 12th over.

The Blasters though could not make the early advantage count for much, adding another 60 runs in the remainder of the overs, losing another 7 wickets in the process. Suraj Ahuja (10), Shivkumar Rakshith (14), Kranthi Kumar (12) and Rishi Bopanna (16*) making the major contributions as the Blasters finished up with 186/9 in 20 overs. For Mangalore, M. Venkatesh, Amit Verma and Aneeshwar Gautam bagged a couple of wickets each.

Chasing a stiff target, Mangalore lost opener and captain R. Samarth for 1 in the second over, before Macneil Noronha and Nikin Jose steadied the ship with a partnership of 70 runs for the second wicket.

Nikin was striking it well and was eyeing a second consecutive half-century, but was dismissed for 35 off 33 deliveries, at a time when his side were beginning to accelerate. Noronha at the other end kept chipping away, even as Abhinav Manohar departed for 11.

Noronha, who mixed caution and aggression, brought up his half century in the 14th over, but could not kick on and was dismissed for a well-made 50 off 36 deliveries, leaving Mangalore in a spot of bother.

A couple of deliveries later Aneeshwar Gautam was packed off for a duck, as the writing started to appear on the wall for Mangalore. Amit Verma followed suit soon after for 8 before H.S. Sharath added a couple of lusty blows and departed for 17 in the 17th over. With 58 needed from 14 balls, rain halted proceedings, and the umpires decided the game in favour of the Blasters on the basis of the VJD method.